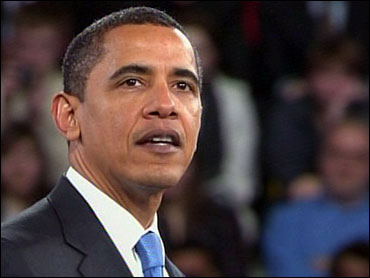 Welcomed with thunderous cheers, President Barack Obama told a European audience on Friday that he is setting a dramatic goal of "a world without nuclear weapons."

The new American president opened a town-hall style gathering with the declaration, saying he would outline details in Prague in the coming days.

"Even with the Cold War now over, the spread of nuclear weapons or the theft of nuclear material could lead to the extermination of any city on the planet," Obama said, previewing a planned speech.

In office just over two months, Obama was in the midst of his first European trip as president as he sought to strengthen the United States' standing in the world while working with foreign counterparts to right the troubled global economy.

Obama said the United States shares blame for the crisis, but that "every nation bears responsibility for what lies ahead - especially now."

Back home, his administration was trying to weather the fallout of another dismal monthly jobs report that was announced as Obama spoke in France. The jobless rate jumped to 8.5 percent, the highest since late 1983, as a wide range of employers eliminated a net total of 663,000 jobs in March.

Obama opened the overseas appearance - in a sports arena and before a French and German audience heavily made up of students - with 25 minutes of prepared remarks read from a Teleprompter.

Inviting questions later, Obama acknowledged "my French and German are terrible" but noted that translators were on hand. But his first questioner turned out to be an American. Seeming surprised, Obama was quick to note: "I did not call on an American on purpose."

Much like during his presidential campaign, Obama paced the stage with a microphone like a talk show host and responded to the woman's question about what he wanted his legacy to be. "After only two months, that's kind of a big question. You aim high knowing you'll make mistakes," Obama said. But he said job No. 1 is restoring America's battered economy.

Obama also sounded an upbeat message of globalization, saying history shows why nations must work together.

"We are most vulnerable to war and conflict when people are desperate economically," Obama said. "Nobody knows that history more than Europe."

The president said he wants to look back at his tenure and know his work drastically lessened the threat of terrorism, particularly nuclear terrorism.

"And we can't reduce the threat of a nuclear weapon going off unless those that possess the most nuclear weapons - the United States and Russia - take serious steps to reduce our stockpiles," Obama said. "So we want to pursue that vigorously in the years ahead."

In his opening remarks, he underscored the importance of the relationship between Europe and America, and he encouraged Europe to support his retooled strategy to root out suspected terrorists in Afghanistan and Pakistan.

"I understand this war has been long. Our allies have already contributed greatly to this endeavor," Obama said. "Understand we would not deploy our own troops if this mission was not indispensable to our common security ... I understand there's doubt about his war in Europe. There's doubt even in the United States."

But he said the United States and its allies must continue to go after terrorists to ensure a safer world.

It was clear as he opened the appearance that he was intent on improving the U.S. image abroad, which suffered under George W. Bush.

"I've come to Europe this week to renew our partnership," Obama said. "America is changing but it cannot be America alone that changes."

Obama bluntly said the relationship between the United States and Europe has gone adrift, with blame on both sides.

In America, he said, "there's a failure to appreciate Europe's leading role in the world."

"There have been times when America's shown arrogance and been dismissive, even derisive," Obama said.

Yet in Europe, he said, there is an anti-America attitude that seems casual but can also be insidious. He said America can be unfairly blamed for many problems.

"On both sides of the Atlantic, these attitudes have become all too common," Obama said. "They are not wise."

Touching on topics controversial in Europe, Obama promoted his decision to close the U.S. prison camp at Guantanamo Bay within a year, and said "without equivocation that the United States does not and will not torture."

Earlier, in a symbolic gesture, French President Nicolas Sarkozy told Obama that France would accept a prisoner from the controversial detention center where terrorist suspects are held if that would facilitate its closing.

Saying that he was determined to "speak the truth," Sarkozy said that Guantanamo "was not in keeping with U.S. values." He said democratic states have a responsibility to speak honestly and do what they say, and that Guantanamo was a contradiction in that standard.

Obama said the U.S. would need help in finding a place to send those held at the center. He thanked Sarkozy for "being good to his word."

"I made the decision to close Guantanamo because I don't think it makes America safer," Obama said.

About 250 detainees are still held - some without charge - at the Guantanamo Bay prison, which was set up after the Sept. 11, 2001, attacks to hold so-called "enemy combatants" accused of links to the al Qaeda terror network or the Taliban. Spain and Portugal have already said they could accept prisoners, while Germany and others remain tightlipped whether they will accept non-nationals.