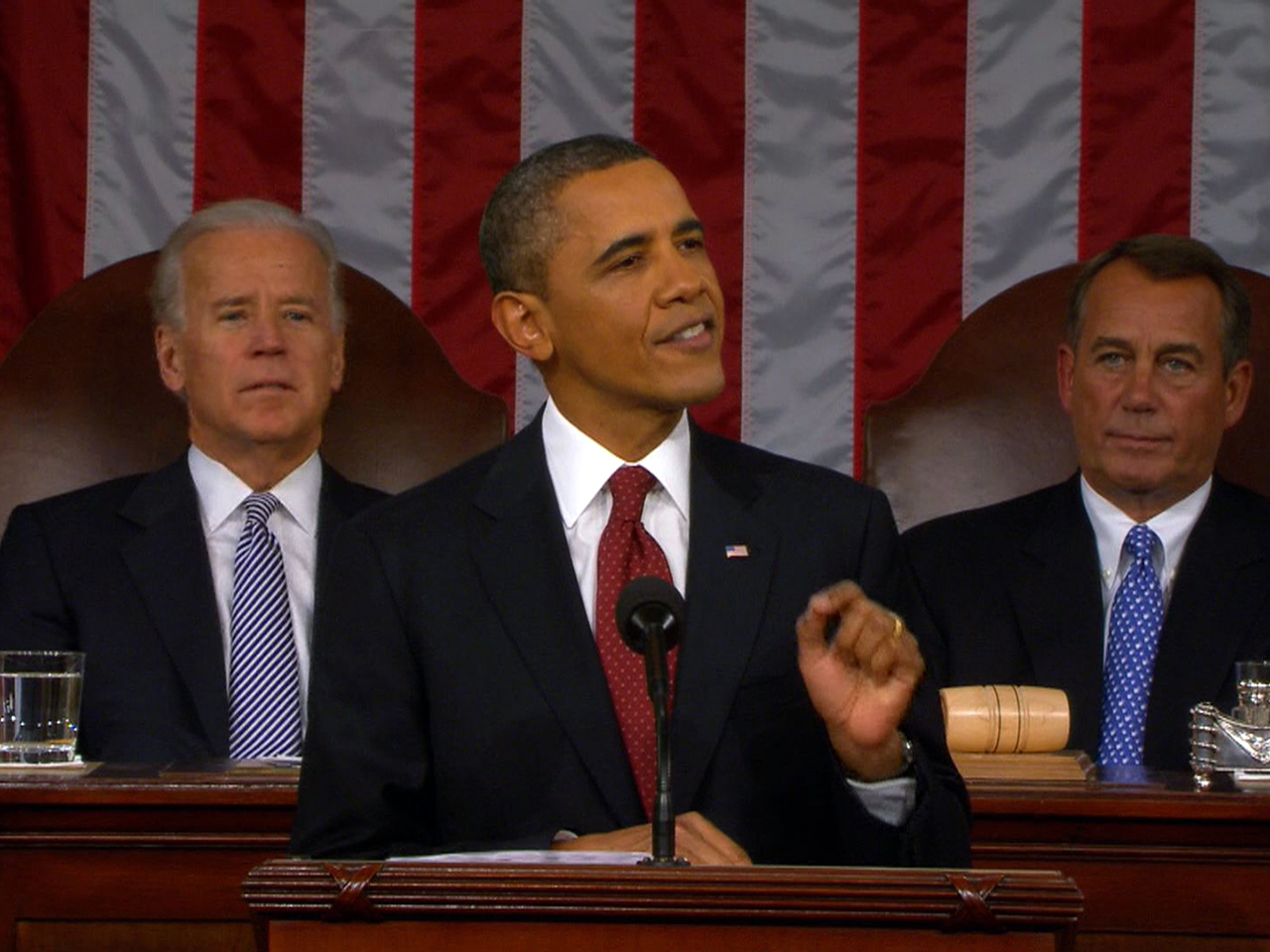 President Barack Obama struck a populist chord Tuesday night in delivering his third State of the Union address, vowing to build a nation where "everyone plays by the same set of rules" and declaring that all Americans deserve a "fair shot" at economic prosperity.

Obama pledged to revitalize key U.S. industries, saying that his economic blueprint "begins with American manufacturing" and calling for an economy that is "built to last." He said:

Think about the America within our reach: A country that leads the world in educating its people. An America that attracts a new generation of high-tech manufacturing and high-paying jobs. A future where we're in control of our own energy, and our security and prosperity aren't so tied to unstable parts of the world.

Some of Obama's strongest rhetoric centered on the politically contentious issue of taxes. Companies that "get tax breaks for moving jobs and profits overseas" shouldn't "get a tax deduction for doing it," he said. All multinational corporations should pay a "basic minimum" tax, Obama said, adding that "every penny" should go toward lowering taxes for companies that create jobs in the U.S. He also advocated providing tax relief for manufacturers, saying that high-tech firms should get "double" the tax deduction for producing their goods in the U.S.

Obama: Everyone deserves a "fair shot"SOTU: Obama must make case for economic agendaMarkets rarely move on State of the Union speechBoehner to Obama: "Work with us"

In another shot aimed at Republican policy-makers, Obama urged Congress to extend a cut in payroll taxes and called on lawmakers to let a tax break for high-income earners expire at year-end. GOP lawmakers have strongly opposed raising taxes on top earners. Such tax benefits increase the federal deficit and require cuts in other essential programs, Obama said in invoking billionaire investor Warren Buffett, who has expressed support for a so-called "millionaire's tax." He added:

Right now, we're poised to spend nearly $1 trillion more on what was supposed to be a temporary tax break for the wealthiest 2 percent of Americans. Right now, because of loopholes and shelters in the tax code, a quarter of all millionaires pay lower tax rates than millions of middle-class households. Right now, Warren Buffett pays a lower tax rate than his secretary. Do we want to keep these tax cuts for the wealthiest Americans? Or do we want to keep our investments in everything else -- like education and medical research; a strong military and care for our veterans? Because if we're serious about paying down our debt, we can't do both....

Now, you can call this class warfare all you want. But asking a billionaire to pay at least as much as his secretary in taxes? Most Americans would call that common sense.

As might be expected in an election year, Obama sought to contrast his policies with those of Republicans, pledging to "fight obstruction with action" and highlighting what he described as the administration's progress in reviving the economy. Businesses have created more than 3 million jobs over the last 22 months, the fastest pace of job-creation since 2005, he said.

To speed that recovery, Obama announced several initiatives aimed at creating jobs and offering financial assistance to struggling Americans. First, he pledged "in the next few weeks" to sign a presidential order eliminating red tape that impedes construction projects. As part of that effort, Obama encouraged Congress to finance such projects by allocating half of the funds he said the country will save by ending the wars in Iraq and Afghanistan, with the other half going to deficit-reduction.

Second, Obama said the government will launch a trade enforcement unit that will investigate unfair trade practices by "countries like China." Congress should ensure that no foreign company has an advantage over American businesses when it comes to accessing finance or new markets, he said.

Third, in a move to stem the tide of foreclosures in the U.S., Obama said he is proposing a plan that will give all "responsible" homeowners a chance to save roughly $3,000 a year on their mortgages by helping them refinance. Funding for the refis would come from collecting a "small" fee on big banks. He said:

No more red tape. No more runaround from the banks. A small fee on the largest financial institutions will ensure that it won't add to the deficit, and will give banks that were rescued by taxpayers a chance to repay a deficit of trust.

In a move likely to rouse the ire of environmentalists, meanwhile, Obama said he is directing his administration to open more than three-quarters of the nation's potential offshore oil and gas resources for exploration. But he also vowed to expand the nation's natural-gas and "clean energy" capacity. Obama said:

I will not cede the wind or solar or battery industry to China or Germany because we refuse to make the same commitment here. We have subsidized oil companies for a century. That's long enough. It's time to end the taxpayer giveaways to an industry that's rarely been more profitable, and double-down on a clean energy industry that's never been more promising. Pass clean energy tax credits and create these jobs.

Thanks to partisan rancor in Congress, amplified this year because of the November presidential election, Obama could find that his agenda is dead on arrival. House Speaker John Boehner was already on the attack earlier Tuesday, accusing the president of putting politics over efforts to forge bipartisan consensus on public policy matters. The House Republican told CBS's Scott Pelley:

I think it's important to note that the president checked out last Labor Day. He spent the last four months doing nothing but campaigning. He hasn't been engaged in the process. And if the president wants us to work together, it takes two to tango.

Obama also may not get much of a political lift from the speech. Polling data following previous State of the Union addresses show that presidents rarely get much of a boost in their approval ratings.