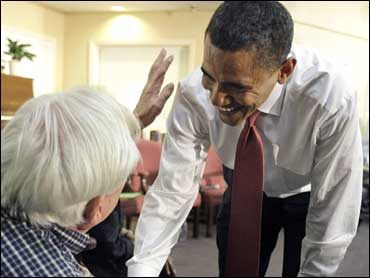 Democrat Barack Obama said Friday he would apply the Social Security payroll tax to annual incomes above $250,000, which would affect the wealthiest 3 percent of Americans.

The presidential candidate told senior citizens in Ohio that it is unfair for middle-class earners to pay the Social Security tax "on every dime they make," while millionaires and billionaires pay it on only "a very small percentage of their income."

The 6.2 percent payroll tax is now applied to all wages up to $102,000 a year, which covers the entire amount for most Americans. Under Obama's plan, the tax would not apply to wages between that amount and $250,000. But all annual salaries above the quarter-million-dollar amount would be taxed under his plan, Obama said.

Obama was vague about what forms of income would be affected, saying, "We should exempt anyone making under $250,000 from this increase so that the change doesn't burden middle-class Americans." Campaign aides said the additional tax, like the current one, would apply only to wages and salaries and not to other forms of income such as investments.

Obama has talked before of establishing such a "doughnut hole" in the amount of income subject to the Social Security tax. Friday marked the first time he confirmed a resumption point: $250,000 and above.

Obama made the remarks at a retirement facility in Columbus, capital of a state he lost badly to Sen. Hillary Rodham Clinton in the Democratic primary on March 4. Republican John McCain is hoping to carry Ohio this fall, as President Bush did four years ago in his narrow win over Democrat John Kerry.

Obama promised to make retirement security a priority in his first term as president but said that bipartisan negotiations will be a necessary part of the process, reports CBS News' Maria Gavrilovic. He said that both Republicans and Democrats will have to "jump at the same time" so that the issue does not become politicized.

He said his plan "allows us to extend the life of Social Security" without raising the retirement age or cutting benefits. Obama said McCain "a few years ago" stated that he might consider a higher cap on incomes subject to the tax, "but today he's attacking me for holding the very same position."

"Imagine if your security now was tied up with the Dow Jones," he said, alluding to the recent slide in stock prices. "You wouldn't feel very confident about the security of your nest egg."

Current retirees would not lose any benefits, McCain said.

The total Social Security tax rate of 12.4 percent is evenly divided between workers and their employers.

Obama, speaking on other retirement issues, said he would "limit circumstances when retirement benefits can be cut," and increase the wages and benefits workers could protect in bankruptcy court. Companies would have to disclose more about their pension fund investments, he said. He vowed to end "the outrage of executives getting bonuses while workers watch pensions disappear."