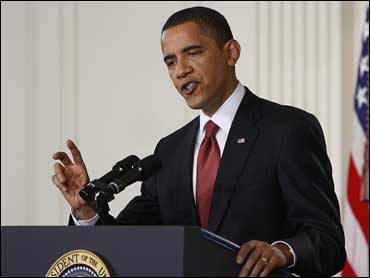 (AP)
The "politics of changing procurement is tough," President Obama admitted when asked during his press conference what he intended to cut form the Defense and Veterans Administration's budgets for savings.

The questioner, from the military newspaper Stars and Stripes, noted that "so many items that seem destined for the chopping block are politically untenable."

He lamented that recently "the V.A. has been under-resourced when it comes to dealing with things like post-traumatic stress disorder or traumatic brain injury, dealing with some of the backlogs in admission to V.A. hospitals."

In terms of cuts, the president said he is working with Defense Secretary Gates to reform the procurement system. He noted that he is not alone in his diagnosis of the procurement problem.

He argued that experts agree that, "you've got a whole range of billion-dollar, multibillion-dollar systems that are seeing cost overruns of 30 percent or 40 percent or 50 percent, and then still don't perform the way they're supposed to."

However, he vowed to continue to "find savings in a way that allows us to put the resources where they're needed, but to make sure that we're not simply fattening defense contractors."