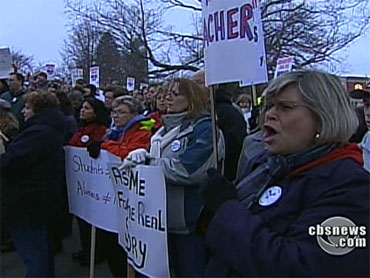 Central Falls, the smallest and poorest city in Rhode Island, is also one of the state's most troubled school districts, with more than half of the students at the high school not making it to graduation.

Union members are fighting for the teachers' jobs, arguing that the move to fire the school's 70-plus teachers will harm students. George Nee, president of the Rhode Island AFL-CIO, said at a rally Tuesday that the action was "immoral, illegal, unjust, irresponsible, disgraceful and disrespectful," according to the Journal.

In order to remain eligible for a portion of financial aid, the Central Falls district had to either come up with a strategy to improve with its existing teaching staff or start from scratch. After negotiations collapsed amid a dispute over how much teachers would be paid for working more hours, officials opted for the latter.

Duncan has mandated that each state's worst performing schools either be closed, converted to charter or charter-like schools, reorganized around a longer school day, or have the entire teaching staff fired. In the last case, a maximum of 50 percent can be rehired in the fall.

"This is hard work and these are tough decisions, but students only have one chance for an education," Duncan said, adding that "when schools continue to struggle we have a collective obligation to take action."