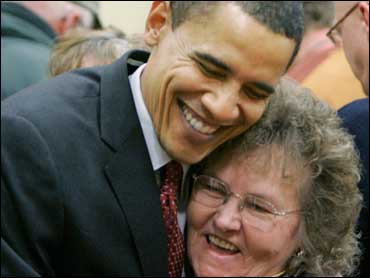 Barack Obama has some urgent making up to do among a lot of angry white women - lifetime Democrats who spurned him for Hillary Rodham Clinton in the primaries and now are threatening to stay home or even vote for Republican John McCain in November.

Amid all the talk about a first black president, many women are deeply disappointed, in some cases furious, that Clinton's own historic campaign fell short and that Obama's campaign undercut her along the way. Her loss was painful for women who have encountered sex discrimination themselves, especially older women who saw her as the best hope for electing a female president in their lifetimes.

Emotions boiled over at last weekend's televised meeting of a Democratic Party rules committee, when some women chanted "McCain '08" after the Clinton team lost its bid to win more disputed delegates from Michigan.

There's talk of a new kind of "stay-at-home moms" - fed-up Democratic women who will stay home on Election Day.

"I think from the very beginning she's been mistreated," former county commissioner Sandra Miller told CBS Evening News anchor Katie Couric. "I know - I watched a lot of interviews and so forth where Sen. Clinton was referred to as 'Mrs. Clinton,' whereas Sen. Obama was 'Sen. Obama.'"

According to exit polling at voting places, white women preferred Clinton to Obama by 24 percentage points in this year's Democratic contests, even tilting toward her in 12 of the 17 states where Obama won and polls were conducted.

And a recent Pew Research Center survey found an eight-point drop in his favorability ratings since February. The center said the slip "is in some measure a negative reaction from frustrated Clinton supporters," with 43 percent of white women expressing a positive opinion of Obama, down from 56 percent in late February.

Healing the wounds will require a strong endorsement by Clinton of the man who beat her, says Sen. Claire McCaskill, D-Mo., one of Obama's most prominent female supporters. And the reality of the presidential stakes will sink in, too, she says.

"As time passes and everyone begins focusing on the differences between John McCain and Barack Obama," she said, "I think the medicine is going to be a little easier to swallow. But right now I think it's really hard for these women."

Obama himself has been heaping praise on Clinton in recent weeks, after it became clear he had the race won. Expect that to continue.

Also, expect Obama and his camp - now expanding to include the Democratic establishment in Congress and elsewhere - to point out how much closer he is than McCain to the disappointed Clinton supporters on issues they care about most.

Jennifer Palmieri, a press aide in Bill Clinton's administration who now works for the Center for American Progress, said she does not think Hillary Clinton lost to Obama because of sexism. "But there have often been sexist overtones to the coverage," she said, proving that "the media thinks it's OK to say sexist things" about matters such as Clinton's pantsuits and her laugh, or to "poke fun at her middle age women supporters."

Despite the hurt feelings, Palmieri said, most traditional Democrats will return to the fold by autumn.

Other Democratic activists are less sure.

Clinton fundraiser Susie Buell of San Francisco said Democratic women have a right to be angry about efforts to push Clinton out of the race before all the primaries were finished. And she said many women feel Obama responded insufficiently to a priest who ridiculed Clinton recently from the pulpit of his former church in Chicago.

Obama, not Clinton, must heal the rift with women, Buell said, or a new brand of "stay-at-home moms" might sit out the election.

"I know that women are very worked up right now," she said. Obama "has never apologized for the way Hillary has been treated."

Obama backers acknowledge he brought some problems on himself - such as saying dismissively in a January debate, "You're likable enough, Hillary" - but they also say he and his aides often held their tongues in recent weeks as the Clinton camp assailed them.

Also, the Obama campaign passed up chances for negative TV ads as the campaign wound down and the results seemed sure - even though she was still arguing she would be the stronger opponent against McCain.

Activists say Obama must work hard to win women's support now, and not expect Clinton to do it for him.

"Obama himself has to introduce himself in a way that really convinces women that they can place their trust and the security of their families in his hands," said Kate Michelman, a former head of the abortion-rights group NARAL and an early Obama backer. "And he will do that."

"I believe a woman president is not that far off," Michelman said, largely because of Clinton's impressive campaign. "Hillary has made that inevitable as far as I'm concerned."

Gloria Steinem, a pioneering feminist, disagrees. "For 35 years people have been asking me if there will be a female president, and I have always said, 'not in my lifetime,'" she said. "I still feel that way. The patterns of history are that, at the upper levels, we see different varieties of men first. The female comes later."

Steinem said disgruntled Democratic-leaning women ultimately will back Obama. Besides, she suggested, much of their ire should be aimed at the news media, not the candidates.

"The media was in love with Obama," Steinem said, "and in hate with Hillary, hands down."