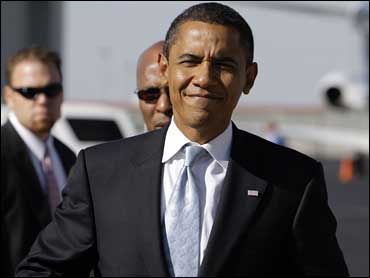 White House rivals John McCain and Barack Obama combined televised attack ads with statesmanlike appeals for bipartisanship on Tuesday as they vied for political gain in the shadow of the worst economic crisis since the Great Depression.

Both men spoke privately with President Bush about the collapse of the financial industry, then publicly made clear their differences with him, McCain more gently than his Democratic rival.

The Republican, campaigning in Iowa, pointedly told reporters there were steps the administration could still take "with the stroke of the pen to help alleviate the crisis gripping our economy. I urge them to do so."

The GOP candidate also suggested wielding authority to purchase $1 trillion in mortgages. A housing bill Bush signed July 30 included $300 billion in new loan authority for the government to back cheaper mortgages for troubled homeowners. The failed bailout bill would have added another $700 billion in authority to deal with troubled housing investments.

In addition, first Obama and then McCain said Congress should lift the current federal deposit insurance limit of $100,000 to $250,000.

Obama's campaign released a new commercial critical of the administration and his campaign rival at the same time. "The old trickle-down theory has failed us," the Illinois senator said in the ad. "We can't afford four more years like the last eight."

The intense maneuvering came one day after the House defeated a bipartisan bailout bill and the stock market responded with its largest one-day drop in history.

Those events, after 10 days of political and market uncertainty, underscored the importance of the economic debacle in a campaign with five weeks to run. Without a solution, the issue has the potential to become even more combustible in the next several days when millions of retirees and workers receive quarterly statements showing sharp drops in their personal investment accounts.

Obama has been gaining in numerous national and swing-state polls in recent days, while McCain has appeared to struggle since he announced a brief suspension in his campaign appearances to help solve the crisis.

He announced the pause a week ago, saying he would fly to Washington and stay there until a solution was found. Three days later, he reversed course and flew to Mississippi for a last Friday's long-scheduled campaign debate.

He sidestepped one interviewer during the day who asked whether he would suspend his campaign once again. "I'll do whatever is necessary and whatever my Republican colleagues and the administration and others ask me to do," McCain replied.

Aides said a return to Washington was likely in the next day or two, and McCain's travel plans were being made less than a day in advance as he awaited developments in the Capitol.

The day began with both presidential rivals emphasizing the need for bipartisanship and offering suggestions for easing the crisis.

"At this moment, when the jobs, retirement savings, and economic security of all Americans hang in the balance, it is imperative that all of us - Democrats and Republicans alike - come together to meet this crisis," Obama said in a written statement issued more than an hour before Bush appeared on television to urge lawmakers to work together.

He said Congress should raise the Federal Deposit Insurance Corporation limit to $250,000 as part of the economic rescue package to "boost small businesses, make our banking system more secure, and help restore public confidence in our financial system."

He said he would contact leaders of Congress "to offer this idea and urge them to act without delay to pass a rescue plan."

McCain spoke at a campaign round-table a few hours later.

"I call on everyone in Washington to come together in a bipartisan way to address this crisis. I know that many of the solutions to this problem may be unpopular, but the dire consequences of inaction will be far more damaging to the economic security of American families and the fault will be all ours," he said.

At the same time, a less high-minded skirmish broke out.

McCain's commercial quoted the Washington Post as saying he had "pushed for stronger regulation" of Fannie Mae and Freddie Mac, the two disgraced institutions that dominate the devastated mortgage industry, "while Mr. Obama was notably silent."

The commercial continues: "But, Democrats blocked the reforms. Loans soared. Then, the bubble burst. And, taxpayers are on the hook for billions."

The Republican National Committee unveiled an even tougher commercial that it said would air in the battleground states of Indiana, Michigan, Ohio, Pennsylvania, Virginia and Wisconsin.

"Wall Street squanders our money and Washington is forced to bail them out with - you guessed it - our money.

"Can it get any worse? Under Barack Obama's plan, the government would spend a trillion dollars more, even after the bailout. A trillion dollars. Who pays? You do." (Watch the new ads here.)