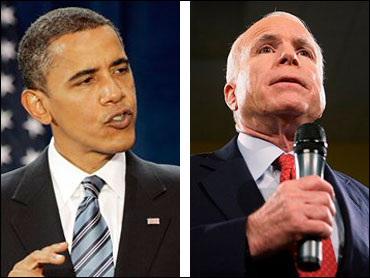 The presidential campaigns argued over who would be best able to deal with the kinds of financial meltdowns that roiled the markets Monday and to prevent a similar crisis in the future.

In an interview with CBS Evening News anchor Katie Couric, Obama said "we have to overhaul our regulatory systems."

Obama told Couric that "if we can just stabilize things and ride out some tough few months and then overhaul the regulatory system, our tax code and start investing in things like clean energy, then I'm confident that we can get the economy back on track by next year."

McCain proposed a review on the order of the one led by the Sept. 11 commission, the bipartisan panel that studied the events leading to the 2001 terrorist attacks. Appearing on the three network morning shows, McCain also defended a remark he made on Monday that the "the fundamentals of our economy are strong."

"The economy is in crisis," McCain said on CBS News' The Early Show. "The fundamentals of our economy are the American worker. The American worker still the most productive and the hardest working, most industrious worker in the world and I am proud of them."

"They have been betrayed by Wall Street -- by greed, by excess and by corruption and they have been done a great disservice, but someone disagrees that American workers aren't the best in the world, we just have a disagreement," he added in the interview with Harry Smith. "We need to set up a 9/11 Commission in order to get to the bottom of this and get it fixed, and act to clean up this corruption… They've violated the social contract that capitalism and the citizen have, and we can't ever let this happen again. I'll make sure it never happens again." (

"Sen. McCain offered up the oldest Washington stunt in the book. You pass the buck to a commission to study the problem," Obama said. "This isn't 9/11. We know how we got into this mess. What we need now is leadership that gets us out. I'll provide it. John McCain won't. And that's the choice for Americans in this election."

Obama also continued to criticize McCain's remark Monday that "the fundamentals of our economy are strong." In a television ad released Tuesday, Obama's campaign asks: "How can John McCain fix our economy if he doesn't understand it's broken?"

On Monday, a few hours after the remark about strong economic fundamentals, McCain backtracked and declared the economy to be in crisis. He also said that American workers and products - the "fundamentals" he claimed he was referring to earlier - were indeed sound but faced danger from greed and corruption.

On the morning shows, McCain said he agreed with Treasury Secretary Henry Paulson that the government should not bail out American International Group Inc., the world's largest insurer.

Saying that the American taxpayer should not be "on the hook" for AIG, McCain said on "Good Morning America" on ABC: "We cannot have the taxpayers bail out AIG or anybody else. This is something that we're going to have to work through."

"I warned two years ago that this situation was deteriorating and unacceptable," McCain said. "And the old-boy network and the corruption in Washington is directly involved and one of the causes of this financial crisis that we're in today. And I know how to fix it and I know how to get things done."

Later, a McCain economics and policy adviser, Douglas Holtz-Eakin, said any plan should include regulation of all sorts of financial institutions, consumer protections, improved corporate governance and "systems stability" programs.

"There's no magic solution, and I don't think it's at this moment imperitive to write down exactly what the plan has to be," said Holtz-Eakin. "But there should be an understanding that when you walk out of the Congress with a piece of legislation in the next administration, those boxes are checked and those things are effectively accomplished."

Both candidates are likely to continue to focus on the economy as the crisis continues on Wall Street. But how they handle it presents risks for both of them, reports CBSNews.com's Brian Montopoli.

"The issue is fraught with peril for both of them," CBS News consultant and political strategist Joe Trippi told Montopoli. "Particularly with financial markets, you don't score points by creating panic. That's not what a presidential candidate does."

"You can make an alarmist statement and trigger an even bigger fall than is occurring," he continued. "Or you can go the way McCain did, which is try to help calm the markets, and be accused of not understanding how perilous the times are."

Democratic vice presidential candidate Joe Biden also got into the fray on several morning shows. He countered by saying that the economic policies of McCain and the Bush administration had led to any betrayal of American workers. He argued that the Republican campaign's message was at odds with itself with McCain saying the economy's fundamentals were sound but that urgent repairs were needed.

"It seems like John's had an epiphany. Nine o'clock yesterday morning, John thought the economy was going great guns and the Bush administration was doing well, and today he thinks it's in crisis," Biden said on The Early Show.

Responding to McCain's comments on workers, Biden said the American worker has been betrayed.

"My lord, take a look at what - who got us in this hole, whose policies," Biden added. "This has been a Republican philosophy of letting Wall Street do what they want and the middle class be damned. It's about time we change it. If I sound like I'm angry, I am fighting mad for middle-class people who have been the scapegoat of this economy because of the policies of the McCains and the Bushes." (