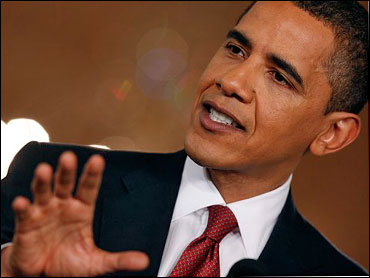 President Barack Obama and Democrats in Congress were largely in accord Wednesday over an ambitious budget that critics have called overreaching though the lawmakers seemed intent on tamping down on ballooning deficits.

Obama is selling his tax and spending plan as essential to an economic recovery, to revamping the country's crippling spending on health care and to putting the nation on a path toward energy independence. But critics of the young administration particularly congressional Republicans and some of the more conservative lawmakers in his own Democratic Party have argued that Obama would drive the country into unsustainable debt.

Senate Majority Leader Harry Reid largely backed the plan after the president met privately with rank-and-file Democrats at the Capitol.

Changes had been made to reflect concern about the deficit, the most notable of which was to assume the president's middle class tax cut would expire after 2010, said Democratic Rep. Kent Conrad, the chairman of the Budget Committee.

Future attempts to extend the tax reductions would have to be paid for from elsewhere in the budget to avoid adding to the red ink, he said.

Obama visited congressional Democrats as committees in the House and Senate settled down to review similar budget plans, with votes on the floors of both houses expected by the end of next week.

A version put forward by the House Budget Committee foresees a $598 billion federal deficit after five years. And there would be a $1.2 trillion red-ink figure for the 2010 budget year, as opposed to $1.4 billion under Obama's plan as scored by the Congressional Budget Office.

Obama was in the Capitol after using a nationally televised news conference Tuesday night pitching the plan.

During the question and answer session with reporters, Obama said Americans should know that his battle with the profound economic crisis has the country "moving in the right direction."

White House spokesman Robert Gibbs said the budget plans in both houses of Congress were "about 98 percent the same" as the one that Obama had outlined.

Conrad had already announced a budget blueprint that would scrap an extension of Obama's signature middle-class tax cut beyond its expiration at the end of 2010. The cut was pass by Congress as part of Obama's $787 billion stimulus package that was passed separately last month.

In the House, Budget Chairman John Spratt Jr. has said his companion plan would employ congressional rules to speed Obama's overhaul of the U.S. health care system without the threat of Republican delaying tactics in the Senate meant to keep a bill from coming to a vote.

As he struggled to reverse the domestic economic course, Obama prepared for a European trip next week that includes a London summit on the global economic crisis. On Friday, the administration will unveil its long-awaited revamping of U.S. strategy for Afghanistan and Pakistan.

On that issue, Obama met Wednesday with NATO Secretary General Jaap de Hoop Scheffer to discuss alliance participation in the U.S.-led war in Afghanistan, now in its eighth year. About half the troops in Afghanistan are from the alliance, although public opinion in Europe is largely against participation.

Obama said he hoped their talks and the upcoming new U.S. plan for the fight against the Taliban and al-Qaida would "invigorate" NATO participation.

Emphasizing his hopes of improving soured U.S.-Russian relations, Obama also sought to assure the NATO chief that the United States would not do that at the expense of alliance solidarity.

"My administration is seeking a reset of the relationship with Russia," Obama said, "but in a way that's consistent with NATO membership, and consistent with the need to send a clear signal throughout Europe that we are going to be abide by the central belief that countries who seek and aspire to join NATO are able to join NATO."

Russia and the United States have grown deeply at odds over many issues since ties began worsening after a honeymoon period when the Soviet Union collapsed nearly two decades ago.

De Hoop Scheffer joined Obama in the spirit of reconciliation with the Kremlin.

"We have many things on which we disagree. But NATO needs Russia and Russia needs NATO. So let's work on the things we agree on and let's not hide our disagreements. Let us realize that also this relationship can and, in my opinion, should be strengthened," said de Hoop Scheffer.