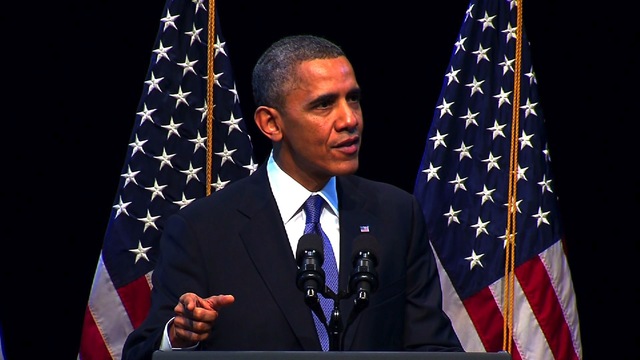 President Obama on Wednesday pointed to a combination of growing income inequality and a lack of upward mobility as “the defining challenge of our time,” arguing the government should take further steps to reverse a decades-long trend that has widened the gap between the nation’s richest citizens and everyone else.

“The basic bargain at the heart of our economy has frayed,” Mr. Obama said. He repeated later in his speech that “the combined trends of increased inequality and decreasing mobility pose a fundamental threat to the American dream, our way of life, and what we stand for around the globe.”

The president’s speech, from a community center in Anacostia, one of the poorest sections of Washington, D.C., is an attempt to reclaim the agenda for the remainder of his presidency. Still, he acknowledged that his administration’s “poor execution” of the health care law and a “reckless shutdown” that froze Washington for half of October, which he attributed to congressional Republicans, had taken a toll on the public’s trust of government.

"Nobody has acquitted themselves very well these past few months. So it's not surprising that the American people's frustrations with Washington are at an all-time high," he said.

During one of the longest speeches he has given this year, Mr. Obama paid homage to his predecessors, including Franklin and Teddy Roosevelt and Abraham Lincoln, who used government to create opportunities and weave safety nets for more people in the United States. It was a follow up on a speech he delivered in Osawatomie, Kansas – the site of Teddy Roosevelt’s “New Nationalism” speech a century earlier – to lay out some of the major economic themes of his 2012 campaign.

He warned that the social compact has broken down since the 1970s, when a combination of technological advancements, globalization, a breakdown of communities, weakened unions, and increased lobbying by businesses weakened the country’s economic foundation and vastly increased the income gap. To make his case, the president cited statistics about the growing percentage of the country’s wealth held by the top 10 percent (up from one third to one half, he said), a runaway gap between CEOs and their workers, and the decreasing likelihood that children born into poverty can escape it in adulthood.

“It should compel us to action. We are a better country than this,” he said.

He also cited recent exhortations against rising income inequality by Pope Francis, echoing the Catholic leader’s question, "How can it be that it is not a news item when an elderly homeless person dies of exposure, but it is news when the stock market loses 2 points?"

These trends, the president argued, are bad for both the economy and for democracy, as the ordinary people feel like they can no longer participate in government. He also urged people to move beyond what he called a “myth” that inequality runs only along racial lines.

The president did not offer any new policies, but repeated several that he has espoused during his presidency. He called for government to “relentlessly push a growth agenda,” including tax reform to close tax loopholes and end incentives to ship jobs overseas, streamlining regulations that are too costly, making further investments, and passing a budget for 2014 and undoing the sequester cuts.

Mr. Obama also said he would work to  improve college affordability, expand the availability of preschool, protect collective bargaining for unions, and urged Congress to pass the Paycheck Fairness Act, the Employment Non-Discrimination Act, and raise the minimum wage.

He stopped short of identifying a new minimum wage number – “we just want it to be higher,” a White House official told CBS News, indicating the president could settle for something between his $9.00 suggestion made in his 2013 State of the Union address and a $10.10 wage proposed by Democrats in Congress.

Speaking broadly about entitlement programs, Mr. Obama said more should be done to help the long-term unemployed, whose benefits are set to expire three days after Christmas, and encourage private saving for retirement.

He had a message for both parties. Progressives, the president said, “should be open to reforms that actually strengthen these programs.” And while he defended the Affordable Care Act as a step to reduce inequality, he told Republicans, “if you still don’t like Obamacare, and I know you don’t….then you should explain how exactly you’d cut costs and cover more people and make insurance more secure. You owe it to the American people to tell us what you are for,” he said.

He took a direct shot at Sen. Mitch McConnell, R-Ky., who is up for re-election this year, saying the Senate Minority Leader “might want to check” with 60,000 newly insured residents of his home state before trying to repeal Obamacare again.

The president restarted efforts to defend his signature policy achievement, Obamacare, during a speech Tuesday. He built on that defense in his speechWednesday, ticking off a slate of statistics he said proves the law is already working to benefit Americans: the slow down in the growth of health care costs, three million young Americans who have been able to stay on their parents’ health care plans, and more than half a million people who stand to receive health insurance for the first time next year.

“It is these numbers, not the ones in any poll, that will ultimately determine the fate of this law,” he said. “This law’s going to work and for the sake of our economic security it needs to work,” he said.

CIA director: Putin's military has many problems, "manpower only one of them"
Rebecca Kaplan