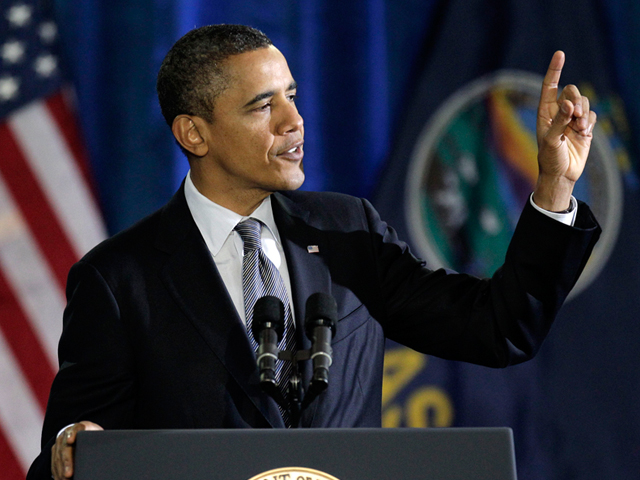 Channeling the progressivism of President Teddy Roosevelt, President Obama on Tuesday traveled to Osawatomie, Kansas to call for an economic agenda based on shared sacrifice and to strongly rebuke the Republicans' laissez-faire policies.

"This is a make or break moment for the middle class, and all those who are fighting to get into the middle class," Mr. Obama said from Osawatomie High School. "At stake is whether this will be a country where working people can earn enough to raise a family, build a modest savings, own a home, and secure their retirement."

Citing both the Tea Party and the Occupy Wall Street movement, Mr. Obama called the restoration of the middle class "the defining issue of our time."

The president once again called on Congress to extend the payroll tax cut and for the wealthiest Americans to pay more in taxes. He also blasted Republicans for blocking his nomination of Richard Cordray to head a new consumer watchdog agency.

Other than that, however, Mr. Obama endorsed few specific policies, choosing instead to promote broad economic ideas -- such as investing in science and research, promoting education and encouraging domestic manufacturing -- which he put in a historical context.

Just over a century earlier, Roosevelt made a similar pitch in Osawatomie, calling for a "New Nationalism." In Roosevelt's era, the president said today, "some people thought massive inequality and exploitation was just the price of progress... But Roosevelt also knew that the free market has never been a free license to take whatever you want from whoever you can."

And for taking that stand, Roosevelt was called a radical and a socialist, Mr. Obama said, eliciting chuckles from the crowd.

Republicans in this era, Mr. Obama continued, have pushed for a trickle-down system of economics that simply doesn't work.

"We simply cannot return to this brand of your-on-your-own economics if we're serious about rebuilding the middle class in this country," he said. "It doesn't result in a prosperity that trickles down. It results in a prosperity that's enjoyed by fewer and fewer of our citizens."

In the last few decades, the average income of the top one percent has gone up by more than 250 percent, he said, while over the last decade, the incomes of most Americans have fallen by about six percent. The typical CEO who used to earn about 30 times more than his or her workers now earns 110 times more.

Income inequality hurts the nation economically, Mr. Obama argued, and it also "runs the risk of selling out our democracy to the highest bidder."