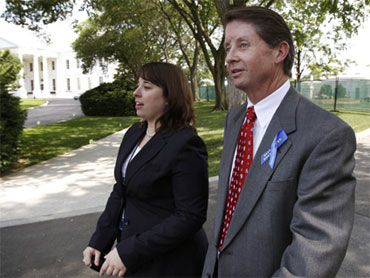 A man whose son was among the 11 workers killed in the Gulf oil disaster says President Barack Obama told the families that he will not forget about them.

Mr. Obama met with the families at the White House on Thursday afternoon.

Keith Jones, an attorney from Louisiana, said Mr. Obama spent as much time as it took with each of the grieving families. Jones called the meeting a "very positive experience" and says the president even played with his 4-week-old grandson.

The baby's father, Gordon, was a mud engineer on the Deepwater Horizon oil rig that exploded April 20 and later sank, leading to the worst environmental disaster in U.S. history. Millions of gallons of oil continue to pour into the Gulf of Mexico.

Spokesman Robert Gibbs said earlier that Mr. Obama also wants to hear the families' thoughts on changes the government can make to ensure that future deepwater oil drilling is safe. Mr. Obama put a temporary halt to such drilling after the April 20 explosion off Louisiana's coast.

Asked whether Mr. Obama thought the families of the 11 men had been lost in the focus on efforts to stop the millions of gallons of crude that have been gushing from the broken underwater well, Gibbs said, "They are certainly not forgotten."

"They were the very first victims of what is a very long and sad tragedy," he said Wednesday.

Their bodies never were recovered.

The president's private meeting with the families in the State Dining Room is part of his effort to show the public, unhappy with the handling of the catastrophe by the government and the well owner, BP PLC, that he is on top of the situation.

Mr. Obama met Monday with Cabinet officials involved in the oil spill response and reiterated his earlier warning to the British oil company to not be "nickel-and-diming" business owners who are losing income because of the spill.

Mr. Obama has visited the Louisiana coast three times since the explosion, including stops last Friday and on May 28. He plans to return Monday and Tuesday for a trip that will take him to affected areas in Mississippi, Alabama and Florida.