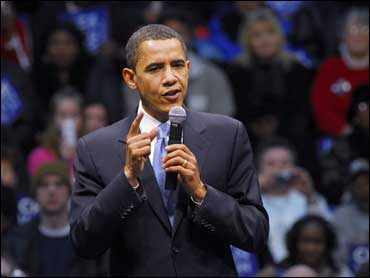 Sen. Barack Obama said Monday that he doesn't think it's a big deal that he borrowed lines from his friend Massachusetts Gov. Deval Patrick, although he probably should have given him credit.

Patrick said during his gubernatorial campaign a year and a half ago that words matter, like "I have a dream" and "all men are created equal."

Obama used the same lines Saturday night in Wisconsin. Obama said that Patrick suggested he use the lines to respond to Hillary Rodham Clinton's suggestion that Obama is more of a talker than a doer.

Clinton spokesman Howard Wolfson accused Obama of plagiarizing Patrick, and that's particularly troubling since Obama's appeal is based in large part on his rhetorical skills.

"It raises questions about the premise of his candidacy," Wolfson told reporters in a conference call. Clinton told reporters late Monday evening: "If your whole candidacy is about words, those words should be your own. That's what I think."

"Now hold on a second. Let's see - I've written two books, wrote most of my speeches," Obama told reporters at a news conference after touring a titanium plant.

"I'm happy to give Deval credit, as I give credit to a lot people for spurring all kinds of ideas," he said. "But I think that it is fair to say that everything that we've been doing in generating excitement and the interest that people have in the election is based on the core belief in me that we need change in America."

Asked whether he wished he would have given him credit given the criticism he's facing, Obama responded: "I was on the stump, and he had suggested that we use these lines. I thought they were good lines. I'm sure I should have - didn't this time."

"I really don't think this is too big of a deal," he said. He said he's noticed Clinton using his phrases sometimes, like "it's time to turn the page" and "fired up, ready to go."

Obama focused on the economy during his trip to this economically depressed manufacturing region of Ohio. He promised he would end tax breaks for companies which move jobs overseas and use the money to give tax breaks to companies who invest in the United States.

At his news conference, Obama also said he didn't expect any immediate endorsement from John Edwards after his secret meeting with his former rival yesterday. "I think he's still mulling things over," Obama said.

Biden pushes for unity in State of the Union as he speaks to divided Congress
Thanks for reading CBS NEWS.
Create your free account or log in
for more features.
View CBS News In
CBS News App Open
Chrome Safari Continue
Be the first to know
Get browser notifications for breaking news, live events, and exclusive reporting.