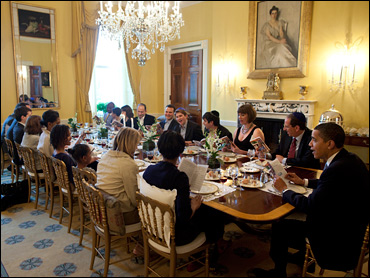 The White House said the Seder meal was traditional, including matzo, bitter herbs, a roasted egg and greens in the family dining room in the executive mansion. The evening also featured the reading of the Haggadah, the religious text of the holiday.

Passover began at sundown Wednesday. It celebrates the Jewish exodus from Egypt after 400 years of slavery.

Among those invited was Valerie Jarrett, one of Obama's closest advisers, and family friend Eric Whitaker, who was visiting from Chicago and attended a Seder last year with the campaign. First lady Michelle Obama and the family's two daughters also planned to attend.

Also on the guest list were Eric Lesser, a personal aide to senior adviser David Axelrod, and his family. Lesser worked during the New Hampshire primary and later handled baggage for traveling reporters. White House videographer Arun Chaudhary - a constant presence on the trail - landed invitations for his family.