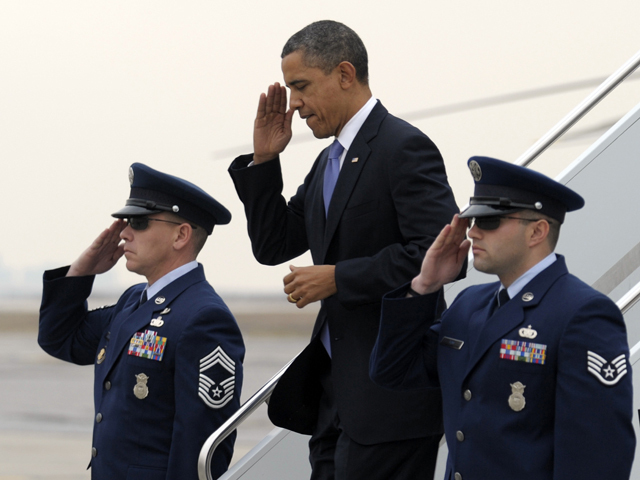 President Obama's fundraising blitz in New York City on Thursday included a $35,800-a-plate dinner with a potentially hostile crowd: Wall Street executives. "So many of you have had to defend me from your co-workers over the last three years," he told a group of 80 guests drawn mostly from the financial services industry who had gathered at a Manhattan restaurant to help raise money for his re-election campaign.

Attendees at the event, held at ABC Kitchen in the Flat Iron District, included prominent Wall Street figures such as Blair Effron, co-founder of boutique investment bank Centerview Partners, and Ralph Schlosstein, CEO of investment bank Evercore Partners (EVR), according to news reports. Yet despite the night's financial contributions, the bankers, hedge fund managers, and other securities professionals who helped bankroll Obama's 2008 campaign have largely withheld their support this time around.

The president has to date raised only $2.3 million from financial services PACs and financial firm employees, less than one-third of what he received from the industry four years ago. That represents a major reversal from Obama's first run at the White House. In only one example of the financial support he formerly enjoyed from parts of the securities and investment sector, Obama's second-largest source of corporate PAC donations in 2007 and 2008 were employees of investment bank Goldman Sachs (GS).

Mapping the candidate fundraisers in ManhattanObama fundraisers hit century markDodd-Frank: Loved by few, hated by many, essential to all

Wall Street's recent coolness comes as no surprise. Obama's support for financial reform, culminating in his signing the Dodd-Frank Act into law in 2010, has angered many banking executives. The law created the Consumer Financial Protection Bureau, a new federal watchdog widely reviled by financial execs; restricted in principle Wall Street firms' proprietary trading activities; and established a framework for tighter industry regulation, among other measures. Bankers also have groused about new laws clamping down on banks' credit-card, overdraft, and merchant-processing fees. Meanwhile, Obama's fiscal-year 2013 budget proposes hitting the biggest financial firms with a "financial crisis responsibility fee" to compensate U.S. taxpayers for the banking bailout and to help homeowners refinance their mortgages.

Obama also has proposed raising taxes on high-income earners and last year expressed support for the Occupy Wall Street protests, saying in October that "the American people understand that not everybody has been following the rules, that Wall Street is an example of that."

Apart from the president's policies and more populist rhetoric in recent months, the presence of former private-equity executive Mitt Romney in the Republican primary is also siphoning money away from Obama. The former Massachusetts governor, a co-founder of buyout firm Bain Capital, has won large financial contributions from heavy-hitters including Stephen Schwarzman, co-founder and chairman of private-equity firm Blackstone Group (BX); former Goldman Sachs CEO John Whitehead; JPMorgan Chase (JPM) vice-chairman James Lee; and hedge-fund investors John Paulson, Julian Robertson, and Paul Singer. And while Obama is outpacing Romney in most states around the nation in raising funds from individuals, the Republican front-runner has done better in places such as Connecticut and New Jersey, where many Wall Streeters live.

In the 2012 election cycle, according to the Center for Responsive Politics, Romney's top five contributors are Goldman, JPMorgan, Morgan Stanley (MS), Credit Suisse (CS), and Citigroup (C), while other major financial industry donors include Barclays (BCS), UBS (UBS), and Wells Fargo (WFC). None of those companies rank among the top 20 contributors to the Obama campaign.

The flow of campaign money from large financial companies to Romney highlights the industry's priorities on a range for issues. For example, lobbyists for the the International Swaps and Derivatives Association and the Securities Industry and Financial Markets Association, trade groups that represent the interests of banks and securities firms, are angling to weaken rules contained in Dodd-Frank that would restrain speculation in the energy markets. Wall Street firms also are pushing back against another provision in the law called the Volcker Rule that seeks to restrict banks' ability to trade for their own accounts and to invest in hedge and private equity funds. Other areas of concern include proposed global capital requirements for large banks and the amount of risk mortgage lenders might have to retain on their balance sheets.

In 2011, the financial industry spent a total more than $159 million on lobbying, according to CFRP. Large commercial banks spent a record $61.5 million.

Romney has said he would repeal Dodd-Frank. By contrast, the Obama administration has made the law a hallmark of the president's re-election campaign, with U.S. Treasury Secretary Tim Geither writing in op-ed in The Wall Street Journal on Thursday arguing that Dodd-Frank established "safer and more modern rules of the road for the financial industry."