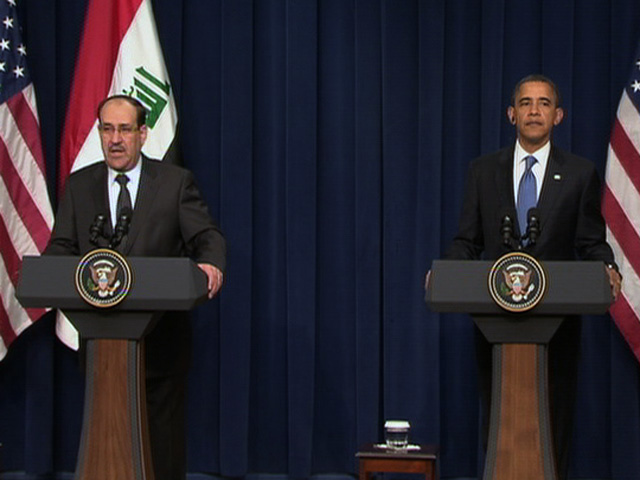 President Obama on Monday said "history will judge" whether or not going into Iraq was a mistake.

In a joint press conference with Iraqi Prime Minister Nouri al-Maliki following a meeting at the White House, Mr. Obama emphasized the strength of U.S.-Iraqi ties and reiterated America's commitment to developing a relationship "based on equal partnerships, mutual interests, and mutual respect."

Still, Mr. Obama said "I think history will judge the original decision to go into Iraq" when asked whether or not he still thought the war in Iraq was "dumb."

In 2002, Mr. Obama, then a fierce opponent of the war, delivered a speech lambasting it as "dumb," "rash," and a "cynical attempt" by the George W. Bush administration to "shove their own ideological agendas down our throats."

On Monday, Mr. Obama emphasized the positive elements that have emerged as a result of the nearly nine years of U.S. involvement in Iraq.

"What's absolutely clear is, as a consequence of the enormous sacrifices that have been made by American soldiers and civilians -- American troops and civilians, as well as the courage of the Iraqi people, that what we have now achieved is an Iraq that is self-governing, that is inclusive and that has enormous potential," he said.

Mr. Obama said his goal was that the United States and Iraq have a "comprehensive relationship."

"We've got an enormous investment of blood and treasure in Iraq, and we want to make sure that even as we bring the last troops out, that it's -- it's well understood both in Iraq and here in the United States that our commitment to Iraq's success is going to be enduring" he said. "You know, what's happened over the last several years has linked the United States and Iraq in a way that is potentially powerful and could end up benefiting not only America and Iraq but also the entire region and the entire world," he said."

Still, the president acknowledged that Iraq would inevitably face challenges in the years to come - particularly in regards to its economic growth.

"After many years of war, and before that a brutal regime, it's going to take time to further develop civil society, further develop the institutions of trade and commerce and the free market, so that the extraordinary capacity of the Iraqi people is fully realized," he said. "But I have no doubt that Iraq can succeed. "