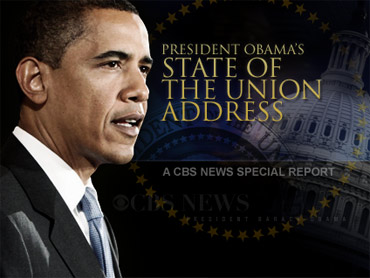 President Obama is taking aim at the Supreme Court's recent decision to roll back limits on corporate spending on political campaigns in his State of the Union address this evening, saying the high court "reversed a century of law to open the floodgates for special interests - including foreign companies - to spend without limit in our elections."

"Well I don't think American elections should be bankrolled by America's most powerful interests, and worse, by foreign entities," the president will say, according to excerpts provided by the White House. "They should be decided by the American people, and that's why I'm urging Democrats and Republicans to pass a bill that helps to right this wrong."

According to CBS News Chief Legal Correspondent Jan Crawford, "the rebuke of the Court is extraordinary." Many of the justices involved in the 5-4 decision are expected to be in the House chamber to hear Mr. Obama's speech.

The president is expected to focus largely on jobs and the economy as he tries to reframe his presidency in the wake of electoral and legislative setbacks for his party in recent weeks.

The president will "call for the elimination of capital gains taxes on small business investment and push for tax credits for both new hiring and investments in new equipment," as CBS News' Robert Hendin reports. He is also expected to ask for repeal of the "Don't Ask, Don't Tell" policy for gays in the military.

But in the excerpts released by the White House, he stresses the importance of lawmakers trying to "overcome the numbing weight of our politics" in the wake of a divisive battle over health care reform in order to pass legislation.

"By the time I'm finished speaking tonight, more Americans will have lost their health insurance," he plans to say. "Millions will lose it this year. Our deficit will grow. Premiums will go up. Co-pays will go up. Patients will be denied the care they need. Small business owners will continue to drop coverage altogether. I will not walk away from these Americans. And neither should the people in this chamber."

The president will urge members of Congress to "try common sense" instead of continuing to "fight the same tired battles that have dominated Washington for decades."

"To do that, we have to recognize that we face more than a deficit of dollars right now," he will say. "We face a deficit of trust - deep and corrosive doubts about how Washington works that have been growing for years."

The president goes on to say he came to Washington to end that "credibility gap," as well as "the outsized influence of lobbyists." He calls for requirements that lobbyists disclose any contact they have with the administration or Congress on behalf of a client - and for "strict limits on the contributions that lobbyists give to candidates for federal office."

He also calls for earmark reform, telling members of Congress that "you have trimmed some of this spending and embraced some meaningful change. But restoring the public trust demands more."

Shortly after excerpts of the president's speech were released, portions of the Republican response from Virginia Governor Bob McDonnell were sent to reporters.

On the health care front, McDonnell plans to say that "most Americans do not want to turn over the best medical care system in the world to the federal government."

He will also argue that government shouldn't "pile on more taxation, regulation, and litigation that kill jobs and hurt the middle class."

With both parties seeking to win points with voters for staking out populist positions, McDonnell will say "government closest to the people governs best."

"Top-down one-size fits all decision making should not replace the personal choices of free people in a free market, nor undermine the proper role of state and local governments in our system of federalism," the recently-elected governor plans to say.