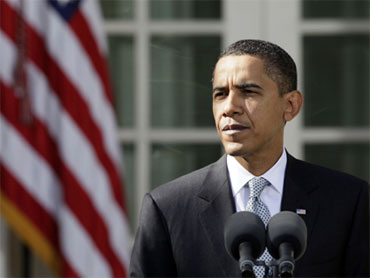 President Barack Obama said Friday the entire nation is grieving for those slain at Fort Hood, and he urged people not to jump to conclusions while law enforcement officers investigate the shootings.

Mr. Obama met Friday morning with FBI Director Robert Mueller and other federal leaders to get an update on what they've learned. Thirteen people were killed and 30 others injured in the shooting rampage at the Texas Army post on Thursday. The suspected shooter is an Army psychiatrist; his motive remains unclear.

"We don't know all the answers yet. And I would caution against jumping to conclusions until we have all the facts," Mr. Obama said in a Rose Garden statement otherwise devoted to the economy.

"What we do know is that there are families, friends and an entire nation grieving right now for the valiant men and women who came under attack yesterday," the president said.

Mr. Obama ordered the flags at the White House and other federal buildings to be at half-staff until Veterans Day. He called it a modest tribute to those who were slain and to those who put their lives on the line in the armed services each day.

"We stand in awe of their sacrifice, and we pray for the safety of those who fight, and for the families of those who have fallen," Obama said.

He promised that that his administration would update the nation as it learns more about what happened, and why, at Fort Hood.