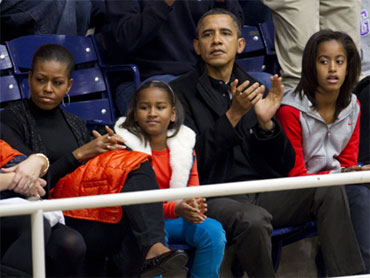 In a pre-Father's Day interview Friday on ABC's "Good Morning America" - President Barack Obama makes it clear that the First Lady is done having children - even if he might like to add a son to the family.

Asked if he ever thought of having a son, Mr. Obama was quick to tell Robin Roberts:

"You know, you act as if this is a decision of mine. This really isn't."

He said wife Michelle makes it clear to him that he did not carry ten pounds in his belly.

"I think what Michelle's general view is, we're done."

Mr. Obama had nothing but praise for his two daughters, calling them smart, funny, kind, respectful, responsible and well-behaved.

"I could not ask for better kids," he said.

He said he's sure there are pleasures for parents of boys or girls. "I don't mind having girls," he said.

With eldest daughter Malia about to become a teenager next month, Mr. Obama said he's glad he has "men with guns" around his daughters and said it's an incentive to run for re-election.

He said it means his daughters will never get in a car with a boy who had a beer.

In the interview, Mr. Obama also said that compared to his childhood and family, wife Michelle grew up in a family he likens to "Leave It To Beaver."

The president said he and Mrs. Obama have the same values on parenthood. "She comes at it based on what she had. I probably come at it based on - to some degree - what I didn't have," he said. His parents were divorced when he was 3 and his dad moved back to Kenya.

Mr. Obama doesn't think either of his daughters will follow in his footsteps and go into politics. "So far, I do not see any inkling of interest."

Asked to reflect on his own father, Mr. Obama remembers he got his first basketball from his dad. "It wasn't until I was in my 20s, that I thought back - that's part of why I've been playing basketball this whole time." He said the basketball was "that one signal of something he had given me."