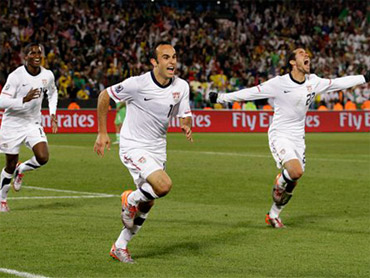 President Obama today called the U.S. Men's World Cup Soccer team to congratulate them on their stirring 1-0 victory over Algeria on Wednesday, which got them through to the second round of the World Cup.

"The president congratulated them on their extraordinary victory and told them that while he was meeting with General Petraeus in the Oval Office, he could hear the rest of the West Wing erupt when Landon Donovan scored the game winner," said a statement from the White House.

Donovan scored with just minutes left in the game, saving the American team from elimination. The team tied its previous two games against England and Slovenia.

Along with congratulating Donovan on his game-winning goal, Mr. Obama asked goalkeeper Tim Howard how his ribs were feeling after blocking some long-range strikes, according to the White House. He also asked Clint Dempsey how his lip was doing after an Algerian defender split it open with an elbow to the mouth.

The President wished the team good luck on Saturday when they will play Ghana and said that the entire country was cheering them on.