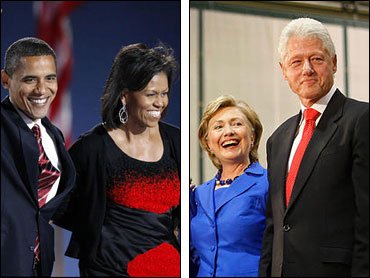 This story was written by Amie Parnes and Glenn Thrush.


Michelle Obama wasn't always an admirer of Hillary Clinton, but last Wednesday the soon-to-be first lady dialed up the former first lady for pointers on protecting her two young daughters from the media maelstrom of the White House.

"Michelle may not have loved the senator, but she always respected how the Clintons raised Chelsea," said a person familiar with Clinton's end of the call. "They need to talk. There just aren't too many people who have shared that kind of experience."

An aide briefed on Obama's side of the chat said she was "grateful" for Clinton's "pointers" on "raising children in the public eye."

It's the latest phase in the ruling-class soap opera that is the Obama-Clinton alliance, where the two first families negotiate new personal relationships as Hillary Clinton wrestles with her own ambivalence about Michelle Obama's husband, a man she once ridiculed as too callow to govern, and then worked tirelessly to elect.

These tensions have created a somewhat schizoid relationship between Clinton and the Obamas - warm on personal matters, warier on political ones, and downright frosty on the still-unresolved issue of Clinton's mountainous campaign debt, which Barack Obama had pledged to help reduce.

"Senator Clinton did not just check the box for Obama - she went all out for him, which says an awful lot about how important she felt this election was, what kind of character she has, and the positive state of their relationship," said Chris Lehane, an aide to both John Kerry and Al Gore during their presidential bids.

Since the Democratic National Convention, Hillary Clinton headlined about three dozen rallies and fundraisers - working rope-lines where well-wishers often lamented her exit from the race.

Bill Clinton, who once called Obama's Iraq policy "a fairy tale," hosted about 20 events for Obama after the Illinois senator paid homage to him with a mid-September visit to his Harlem office.

Obama responded by lavishing praise on the pair - after months of questioning the legacy of the Clinton White House. More importantly, he embraced much of Hillary Rodham Clinton's domestic agenda, especially her health care and green jobs proposals.

Yet a half-dozen Clinton insiders told Politico they are disappointed that Obama's vaunted fundraising operation hasn't reciprocated by planning new events or an Internet campaign to help Clinton pay off the $7.9 million she owes to vendors. (Clinton has already written off the $13 million she loaned the campaign during the primaries, aides say).

"I don't think there's a whole lot of hard feelings, it's more like mild annoyance," said a former Clinton aide on condition of anonymity. "There's just not a lot of expectation they are going to lift a finger for us."

Added another longtime Clinton adviser: "She killed herself for them, did a hundred events, went anywhere they pointed - so it's disappointing they aren't helping… But it's not a big deal at this point."

One former Clinton fundraiser took a more cold-blooded view. "In a few months, when he's really struggling, he'll come to her for support," he said. "That's when she should ask him for money."

An Obama spokesman didn't comment but didn't rule out a debt retirement effort down the road.

Clinton is expecting a warmer reception from Obama on legislative issues.

People close to the New York senator say she is still struggling to define her role in the Senate following a jarring and unexpected loss. But she's sure of one thing: she desperately wants to play a major role in crafting the health care reform Obama has pledged to introduce.

Still, she is unlikely to make immediate demands of Obama and is committed to giving the president-elect a wide berth on how and when he introduces reforms, given the economic crisis. And she's reportedly leery of getting between Sen. Ted Kennedy (D-Mass.), the ailing chairman of the health committee and budget committee chairman Sen. Max Baucus, who are both staking claims on the plan.

The Obama-Clinton relationship is less fraught on the personal front, where Clinton seems surprisingly eager to mentor Michelle Obama.

The incoming First Lady, who had been privately critical of Clinton during the primaries, first reached out to the former First Lady six weeks ago for advice on how to provide some semblance of normality for her young daughters Sasha and Malia.

"They talked for 30 minutes the first time," said a Clinton insider. "It wasn't just for show - it was a real conversation."

Last week, on election night, it was Hillary Clinton making the call, congratulating Barack Obama on his victory and consoling him after the death of his grandmother, according to a Clinton spokesman.

It won't be their last conversation. During that chat, the president-elect vowed to schedule a sit-down meeting with the Clintons in the not-too-distant future, sources say.
By Amie Parnes and Glenn Thrush