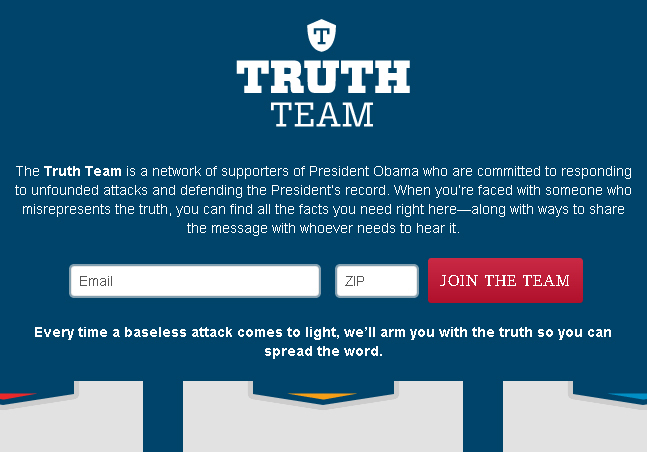 President Obama's re-election team on Monday rolled out a campaign to recruit two million supporters to help debunk attacks on the president's record and hit back at his Republican rivals.

Called the "Truth Team," the new effort will engage Obama supporters online and in person, encouraging them to communicate with undecided voters about the president's record.

Obama for America, the president's re-election team, will announce "truth teams" in a handful of swing states today. National groups like the National Education Association and the Service Employees International Union have also signed on as partners in the effort.

The "Truth Team" website highlights the effort's three goals, each of which have their own website: AttackWatch.com will defend the president against false attacks, KeepingGOPHonest.com will fact check Republicans' claims about their own records, and KeepingHisWord.com will tout the president's record.

In 2008, more than a million people participated in Mr. Obama's similar "Fight the Smears" initiative. This year, the campaign hopes to double that number before the Democratic National Convention in the fall.

The "truth team" effort acknowledges the bitter contest expected between Mr. Obama and his 2012 opponent. Social media can be a powerful tool to help combat attacks, but it also carries some risks -- when the campaign launched AttackWatch.com last fall, conservatives largely lampooned it.