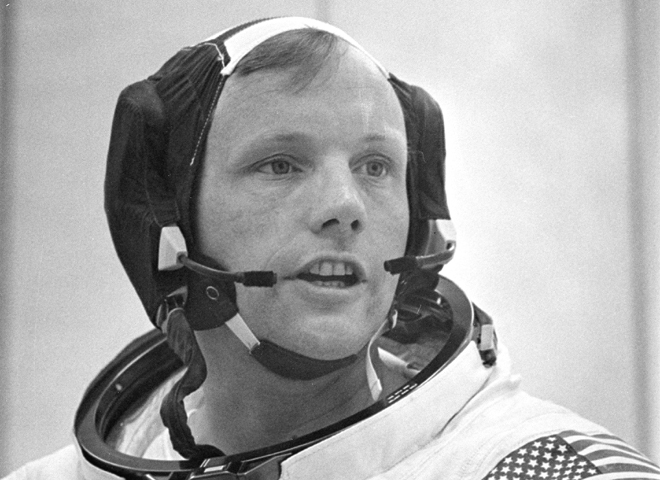 (CBS/AP) President Obama and former astronauts Buzz Aldrin, John Glenn and Michael Collins are among those remembering Neil Armstrong, the first man on the moon, who died Saturday at the age of 82.

"Michelle and I were deeply saddened to hear about the passing of Neil Armstrong," said the president in a statement issued by the White House. "Neil was among the greatest of American heroes - not just of his time, but of all time. When he and his fellow crew members lifted off aboard Apollo 11 in 1969, they carried with them the aspirations of an entire nation. They set out to show the world that the American spirit can see beyond what seems unimaginable -- that with enough drive and ingenuity, anything is possible. And when Neil stepped foot on the surface of the moon for the first time, he delivered a moment of human achievement that will never be forgotten.

"Today, Neil's spirit of discovery lives on in all the men and women who have devoted their lives to exploring the unknown - including those who are ensuring that we reach higher and go further in space," the president continued. "That legacy will endure - sparked by a man who taught us the enormous power of one small step."

Neil Armstrong, first man on the moon, dead at 82

Obama's Republican opponent Mitt Romney echoed those sentiments, calling Armstrong an American hero whose passion for space, science and discovery will inspire him for the rest of his life.

"The moon will miss its first son of earth," Romney said.

NASA Administrator Bolden said "as long as there are history books, Neil Armstrong will be included in them."

Bolden issued a statement on Saturday on the famed astronaut's death. He said Armstrong will be "remembered for taking humankind's first small step on a world beyond our own."

Bolden said Armstrong was "one of America's greatest explorers" who readily accepted President John F. Kennedy's challenge to send an American to the moon.

Former astronaut John Glenn said about Armstrong's in a phone interview from Columbus, Ohio: "When I think of Neil, I think of someone who for our country was dedicated enough to dare greatly."

Armstrong commanded the Apollo 11 spacecraft that landed on the moon on July 20, 1969. His crew member from the mission, Buzz Aldrin, issued a statement saying he was saddened to learn of Armstrong's death:

"Whenever I look at the moon it reminds me of the moment over four decades ago when I realized that even though we were farther away from earth than two humans had ever been, we were not alone. Virtually the entire world took that memorable journey with us. I know I am joined by millions of others in mourning the passing of a true American hero and the best pilot I ever knew. My friend Neil took the small step but giant leap that changed the world and will forever be remembered as a landmark moment in human history. I had truly hoped that in 2019, we would be standing together along with our colleague Mike Collins to commemorate the 50th Anniversary of our moon landing. Regrettably, this is not to be. Neil will most certainly be there with us in spirit."

The third astronaut on the mission, Michael Collins, circled the moon in the mother ship Columbia 60 miles overhead while Armstrong and Aldrin went to the moon's surface.

An estimated 600 million people -- a fifth of the world's population -- watched and listened to the landing, the largest audience for any single event in history.