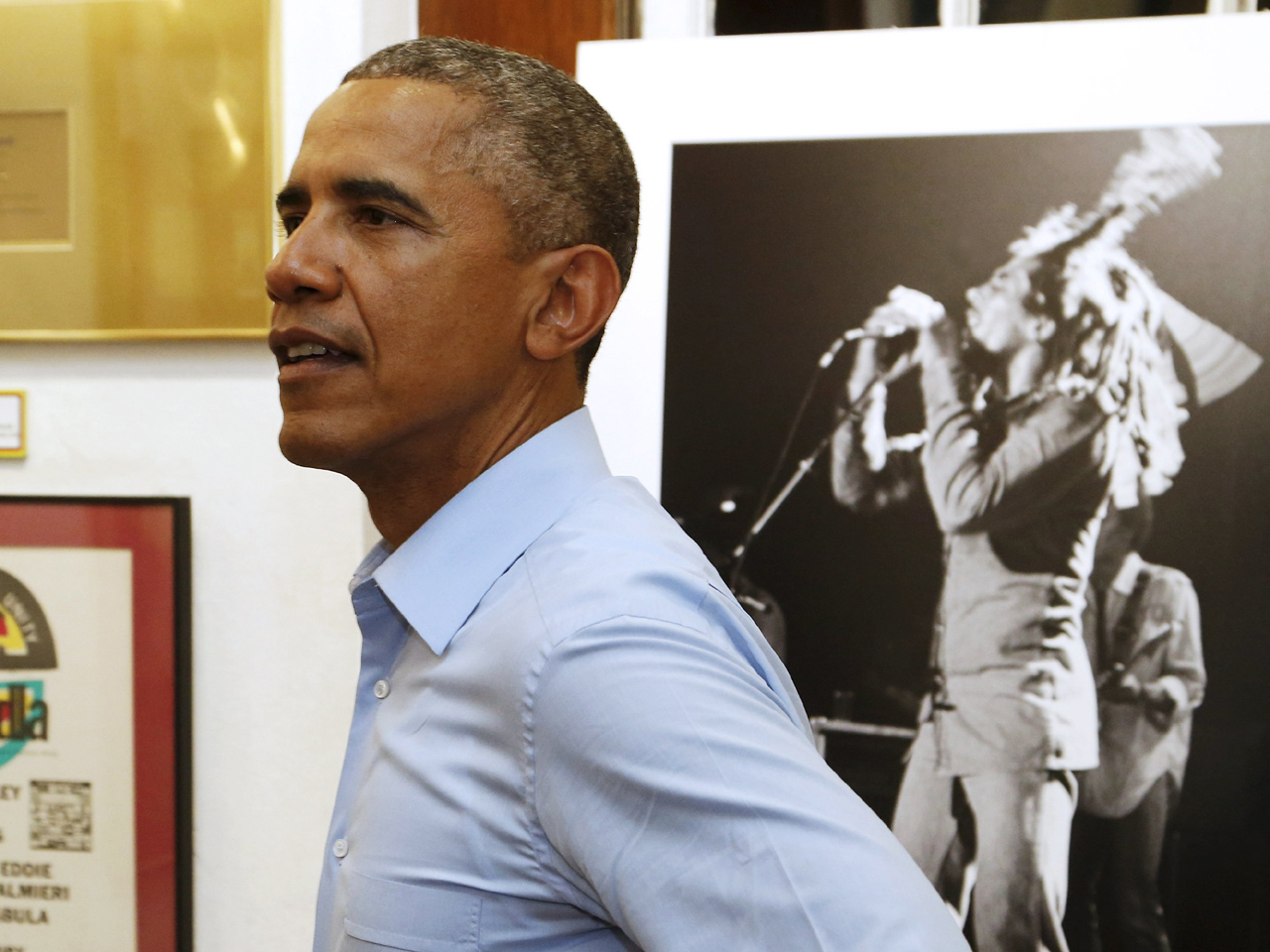 KINGSTON, Jamaica -- The Caribbean region collectively cheered when President Obama was first elected president in 2008. Calypso and reggae songs were written in his honor, the French Caribbean island of Martinique named a road after him, and Antigua's highest mountain officially became "Mount Obama" as the small country saluted him as a symbol of black achievement.

The first president to visit Jamaica in three decades, Mr. Obama arrived in Kingston Wednesday evening trying to rekindle an enthusiasm that has waned amid a perceived lack of attention from the American president.

Mr. Obama was greeted by Prime Minister Portia Simpson-Miller, U.S. Ambassador to Jamaica Luis Moreno and a dozen other dignitaries. He promptly embraced the local color and one of the island's icons, making a late evening visit to the Bob Marley Museum.

Mr. Obama's trip is more than just an effort in rebuilding popularity, though. His meetings Thursday with Simpson Miller and with other leaders in the 15-member Caribbean Community are weighted with self-interest.

China has steadily expanded its economic alliances in the Caribbean, and the region is seeking to reduce its dependence on subsidized oil from an economically struggling Venezuela. China is providing much of the financing for new roads, bridges and other infrastructure projects.

"China is running away with the gold in the view of many region watchers. Its footprint is visible and obvious through its 'checkbook' diplomacy in the Caribbean," said Anthony Bryan, an international relations professor at Trinidad's campus of the University of the West Indies, a public university system serving 18 English-speaking countries and territories.

"We, in looking at the region, saw that a number of the (Caribbean) countries had significant energy needs," said Benjamin Rhodes, a White House deputy national security adviser. "At the same time, the United States has significant resources, not just in terms of our own energy production, but also in our energy infrastructure, in our ability to work with countries that have formed cooperative solutions to promote energy security."

There are growing signs that the U.S. is stepping up its focus on the Caribbean to help fill a potential void left by Venezuela's scaled-back oil diplomacy. Earlier this year, Vice President Joe Biden hosted prime ministers and other top officials from all Caribbean countries except Cuba at the first Caribbean Energy Security Summit in Washington. The focus was on exploring ways to help Caribbean nations obtain financing from international financial institutions to convert diesel-powered energy plants to natural gas and increase alternative energy sources.

Mr. Obama's visit to Jamaica is the first one by a U.S. president since President Ronald Reagan Reagan in 1982. He was last in the Caribbean region in 2009 when he attended the Summit of the Americas in Trinidad. This time, Mr. Obama's stop in Kingston comes ahead of his attendance at this year's summit of the Western Hemisphere's heads of government Friday and Saturday in Panama.

While Obama T-shirts and bumper stickers can still be seen on Caribbean islands where many people share a similar racially mixed family tree as the U.S. president, the fact that the American leader is partly of African heritage is no longer heralded as marking an era of tolerance and possibility.

"I think some people around here hoped Obama could make the world's problems go away but this world has a whole heap of problems that are never going away. But Caribbean people will always like Obama because we can see ourselves in Obama," Jamaican furniture upholsterer Llewellyn Clarke said as he waited for a bus near the U.S. Embassy in the island's capital of Kingston.

The U.S., long the dominant influence in much of the Caribbean, remains the top trading partner of many countries in the region and their largest market for tourism. Yet for years there has been a chorus of complaints that, other than anti-drug efforts, Washington no longer pays much attention to the region once described by Reagan as America's "fourth border."

"Any interest that the American government shows in the Caribbean is an improvement because we have been ignored completely throughout the two terms of the Bush presidency and most of the two terms of this one," said Damien King, a prominent economist in Jamaica who is co-executive director of regional think tank Caribbean Policy Research Institute.

Rhodes, the deputy national security adviser at the White House, did not dispute the perception that the United States "has not engaged these countries as significantly as we should." But he said creating partnerships and investing in the region will help address those doubts.