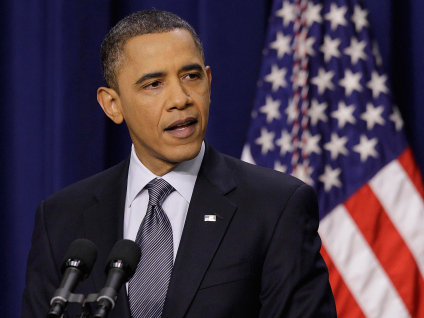 President Obama said at a press conference Wednesday that it is "ironic" that the Iranian government is celebrating the Egyptian protests while attacking their Iranian counterparts.

On Tuesday, hardline Iranian lawmakers called for opposition leaders to be put to death in the wake of a rally in solidarity with the Egyptian revolt. At that rally, according to eyewitnesses, protesters were shot and beaten.

Mr. Obama said "what has been true in Egypt should be true in Iran, which is that people should be able to express their opinions and their grievances and seek a more responsive government."

"What's been different is the Iranian government's response, which is to shoot people and beat people and arrest people," he continued. "And, you know, my hope and expectation is is that we're going to continue to see the people of Iran have the courage to be able to express their yearning for greater freedoms and a more representative government."

He added that "America cannot ultimately dictate what happens inside of Iran any more than it could inside of Egypt; that ultimately these are sovereign countries that are going to have to make their own decisions."

"What we can do is lend moral support to those who are seeking a better life for themselves," the president continued. "...You can't maintain power through coercion. At some level, in any society, there has to be consent."