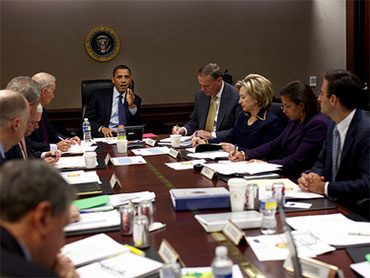 President Obama will announce his new strategy in Afghanistan and Pakistan, as well as any troop increase in the region, in a speech next Tuesday at 8:00 p.m. Eastern Time at the United States Military Academy at West Point, White House press secretary Robert Gibbs told reporters this morning.

In the speech at West Point, which is located 50 miles north of New York City, the president is expected to announce he is deploying between 30,000 and 35,000 additional troops to Afghanistan. Gibbs said today that the president has not yet informed him of a final decision.

The press secretary said the president will discuss how to get additional troops into Afghanistan, how to train Afghan forces to take their place, and how to get them out.

"This is year nine of the United States in Afghanistan and we're not going to be there in another eight or nine years," he said, adding: "Our time there will be limited."

Gibbs said the president will discus how to ramp up training of Afghan personnel so security forces "can keep the gains that have been made."

Following a meeting with Indian Prime Minister Manmohan Singh yesterday, the president vowed to "finish the job" that began more than eight years ago in Afghanistan following the Sept. 11 attacks.

There are 68,000 U.S. troops in the country now, including the 21,000 already deployed by the president. Gen. Stanley McChrystal, the top U.S. commander in the region, has sought an additional 40,000 troops.

The president will meet with key members of Congress Tuesday before leaving for West Point, Gibbs said. He will seek to shore up support for his new strategy amid concerns – particularly among members of his own party – that he is further involving the country in a costly and ill-defined mission. The White House has estimated that the cost per year for each additional troop will be $1 million, though the Pentagon puts that figure lower.