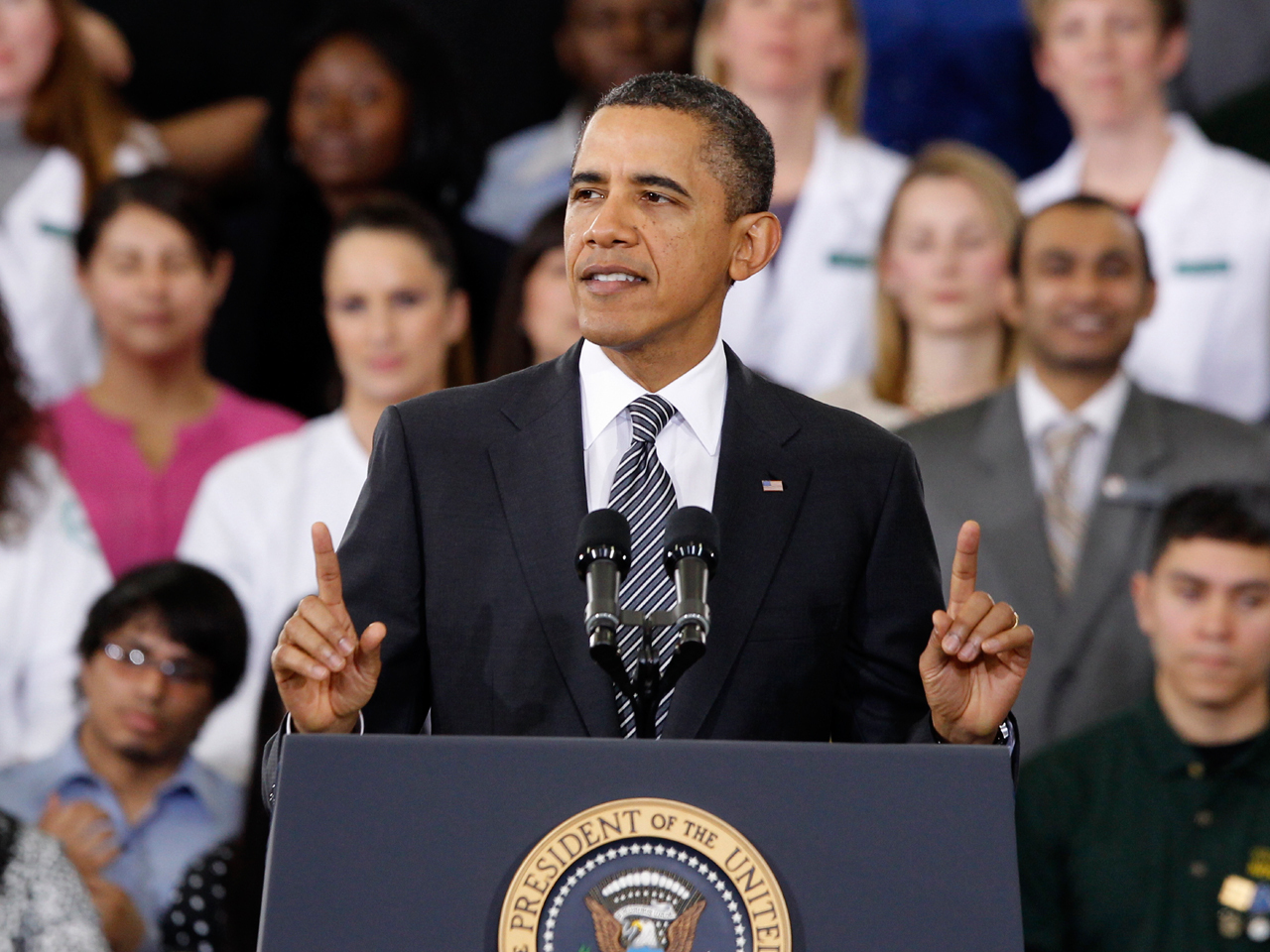 Speaking at Northern Virginia Community College in Annondale, Va., Obama echoed many of the themes that have featured in his recent speeches, including the need for all Americans to contribute their "fair share" and to play by the rules. "We've got to renew the American values of fair play and shared responsibility," he said.

Obama also said he is making "tough choices" in cutting government spending in order to put the country on a sustainable economic path. Yet he warned that excessively large cutbacks would threaten the recovery, which he said is gaining strength. "The last thing we need is for Washington to stand in the way of America's comeback," he said in urging lawmakers to approve a two percent cut in payroll taxes. "Congress needs to stop taxes from going up on 160 million Americans," he added.

The budget for the government's next fiscal year, which takes effect Oct. 1, would shrink the deficit by $4 trillion over the next 10 years by cutting federal spending and by raising taxes on people earning at least $250,000 per year. For 2013, the White House projects a deficit of $901 billion, or 5.5 percent of GDP. That figure is down from an estimated $1.33 trillion in fiscal-year 2012, 8.5 percent of GDP. The goal is to reduce the budget gap to 2.7 percent percent of GDP, or $575 billion, by 2018.

The plan calls for deficit reduction to be achieved chiefly by slashing government expenditures. Obama is proposing $2.50 in spending cuts for every $1 dollar the government would raise in revenue by raising taxes on high income-earners and from eliminating corporate tax breaks. Discretionary spending, annual government outlays approved by Congress on everything from health research and pollution control to education and child care, is slated to decline from 8.7 percent of GDP in 2011 to 5 percent in 2022. As part of these cuts backs, the defense budget would decrease $487 billion.

Mandatory spending programs -- those authorized by law, rather than set by Congress every year -- also would take a hit. More than $360 billion in savings would come from trimming Medicare, Medicaid, and other health programs over 10 years, mostly by reducing payments to health care providers.

The tax measures included in the budget have long been on Obama's wishlist. He is pushing to let tax cuts for wealthier Americans enacted under President George W. Bush lapse, as scheduled, by year-end. Also on the agenda is the so-called Buffett rule, named after investor Warren Buffett, under which any U.S. household with annual income of more than $1 million would pay a minimum federal tax rate of 30 percent. These changes to the tax code would increase tax revenue by $1.5 trillion over 10 years, according to the White House.

One new source of revenue envisioned under the president's budget -- a "financial crisis responsibility fee" levied on big banks that would raise $61 billion over 10 years. The charge is aimed at repaying taxpayers for bailing out large financial firms in 2008 and 2009.

To boost employment starting this year, Obama is asking for roughly $350 billion to extend and expand the payroll tax cut and to continue unemployment benefits through the end of the year. Part of that funding also would go toward rebuilding the nation's roads, railways, and airport runways; renovating schools; and helping states and municipalities hire and retain teachers and emergency personnel.

Businesses also could see a boost under the budget. Companies would be allowed to continue deducting the full amount of new capital investments. In addition, a new tax credit for 2012 would give small businesses that hire new workers a tax cut equivalent to 10 percent of the additional wages, up to $500,000.

Manufacturers that create jobs in the U.S. also would be in line for tax breaks, while companies that move jobs overseas would lose some deductions. Manufacturers that invest in communities with high unemployment would be eligible for another tax credit. To support innovation, Obama is seeking nearly $141 billion for non-defense research and development, a 5 percent increase from the 2012 level.

Obama would spend $476 billion over six years on transportation projects, including an expansion of inter-city passenger rail service. That would be paid for through federal fuel taxes and through savings from ending the war in Iraq and scaling down U.S. military operations in Afghanistan.

"Reining in our deficits is not an end in and of itself," he said. "It is a necessary step to rebuilding a strong foundation so our economy can grow and create good jobs. That is our ultimate goal. And as we tighten our belts by cutting, consolidating, and reforming programs, we also must invest in the areas that will be critical to giving every American a fair shot at success and creating an economy that is built to last."

In related goals aimed at creating jobs, the budget calls for putting one million electric vehicles on the road by 2015 and doubling the share of electricity the nation gets from "clean energy" by 2035. Obama also favors eliminating 12 tax breaks for oil, gas, and coal companies, which is expected to raise $41 billion over 10 years.

Seeking to revive the ailing housing and construction sectors, funding also would flow toward a previously proposed program, dubbed "Project Rebuild," in which workers would be hired to renovate foreclosed and abandoned properties.

White House officials made the rounds on TV on Sunday to begin drumming up public support for the budget. Pressing the case for stimulus, Obama chief of staff Jacob Lew argued that short-term government spending cuts would hurt the economy.

"There's pretty broad agreement that the time for austerity is not today. We need to go on a path where, over the next several years, we bring our deficit under control," he said on the NBC program "Meet the Press." "Right now we have a recovery that's taking root, and if we were to put in austerity measures right now, it would take the economy in the wrong way."

Republican leaders, who favor spending cuts and oppose the use of tax revenue to lower the deficit, also took to the airwaves this weekend ahead of Obama's budget proposal. Rep. Paul Ryan, R-Wis., head of the House Budget Committee, told the Associated Press that GOP lawmakers are "taking responsibility for the drivers of our debt."