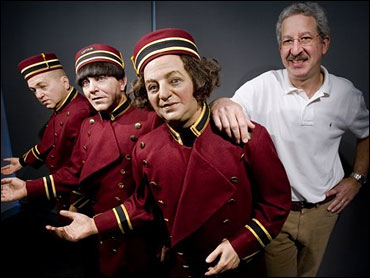 Posing for a picture with life-size replicas of the Three Stooges, Gary Lassin smiled but didn't say "cheese."

The statues of Larry, Moe and Curly are near the entrance to the Stoogeum, home of Lassin's large and priceless collection of Stooges memorabilia.

The Stoogeum (think "Stooges" plus "museum") has about 3,500 items on display, from Stooges bowling balls and cereal boxes to Shemp Howard's Army discharge, Larry Fine's driver's license and the flying submarine from "The Three Stooges in Orbit."

"This is as good as it gets," Lassin said.

Lassin, 52, opened the Stoogeum three years ago in a renovated architect's office that looks like a large house. It's a gold mine for fans of the old-time knucklehead movie and TV trio, but its off-the-beaten-path location in Spring House - about 25 miles north of Philadelphia - has made it a fairly well-kept secret.

"People sort of have to work to find me," Lassin said. "I do want people to see it, but I want them to see it on my terms."

Those terms include no photographs of the memorabilia, as he fears too much exposure will cheapen it. And admission is by appointment only because Lassin, who has a day job as an executive with a mail-order catalog company, is the Stoogeum's sole employee.

The exhibits occupy three stories totaling 10,000 square feet, including an 85-seat theater. Rooms are filled with movie props, posters, toys, artwork, figurines, scripts and even a video game, while TV screens replay all the eye-poking, pie-throwing and general mayhem that made the Stooges famous.

The act started out in vaudeville in the 1920s as support for comic Ted Healy. The first Stooges film, alongside Healy, was 1930's "Soup to Nuts." The last one released was "The Outlaws Is Coming," in 1965. Brothers Shemp and Moe Howard, and Fine were the earliest Stooges. Curley Howard then replaced brother Shemp for many years. Later Stooges included Joe Besser and Curly Joe DeRita.

The Stoogeum has "more stuff than I even imagined existed," said Peter Seely, editor of the book "Stoogeology: Essays on the Three Stooges." "Going through there is sort of like a trip through the history of pop culture in the 20th century."

Yet, what visitors see is only a sampling of Lassin's estimated 100,000 items. His collection is both historical and personal, documenting the slapstick performers' indelible place in entertainment but also preserving a family legacy: Lassin's wife's grandfather, Morris Feinberg, was the brother of Stooge Larry (born Louis Feinberg).

Lassin was already a Stooges fan - "Soitenly!" he said - when he married into the family in 1981. He later became a sort of self-appointed guardian of Stooges keepsakes, which included items Morris Feinberg had received from his brother.

As the collection grew, Lassin kept it in countless drawers, boxes, notebooks and file cabinets above his garage. He opened the Stoogeum in 2004, self-financing it at an undisclosed cost; he called it part real-estate investment, part tax shelter, and part "complete waste of money."

It's likely the first museum of its kind, said Eric Lamond of California-based C3 Entertainment Inc., a production company created by the Stooges that still owns the brand.

"Gary's collection is enormous," said Lamond, who is also Fine's eldest grandchild. "I would think that his is the largest."

Lamond noted C3 Entertainment is considering building its own museum, but has no immediate plans to do so.

For now, fans have the Stoogeum. Lassin said about 2,500 people visit each year, many during the annual gathering of the Three Stooges Fan Club. Others seek out the place on their own, just because they have a soft spot for three goofballs they've loved since childhood.

Lassin recalled a couple from Richmond, Va., who recently trekked to the Stoogeum and afterward asked him offhandedly how to get to Philadelphia - they might as well see the Liberty Bell.

Eventually, said Lassin, the museum might have employees and regular business hours a few days a week. He would seem to be guaranteed a steady stream of visitors since the Stooges' zany antics, even though decades old, continue to win them admirers.

"Their comedy is timeless," said Seely, the editor. "They were misfits wherever they were. ... You can plop them down in just about any time or place and they'll struggle with their environment. They could still do films today."

For Lassin, their appeal is even easier to explain.

"They were funny. It's as simple as that," he said. "Laughter makes you feel good."