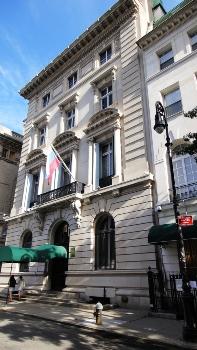 NEW YORK — Police are investigating after a 63-year-old man was found dead inside the Russian Consulate on Manhattan’s Upper East Side on Tuesday morning.

Authorities say they found the man unconscious and unresponsive at the location on 91st Street just before 7 a.m., reports CBS New York.

The victim, who has not yet been identified, appeared to have suffered head trauma, police said.

A medical examiner will determine the exact cause of death.

An investigation is ongoing, however, in a statement to CBS News, the NYPD said: “It doesn’t appear to be the result of criminality.”