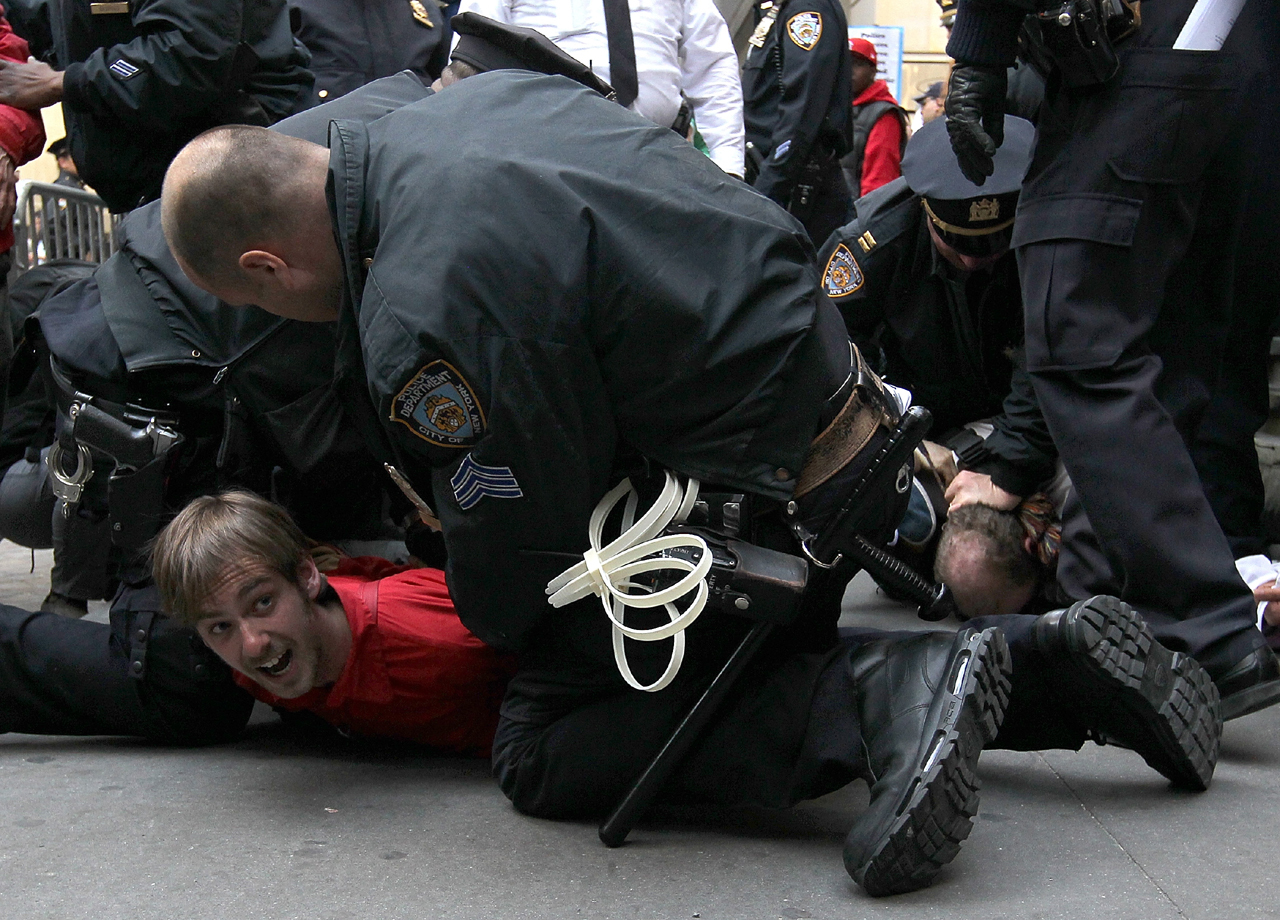 (AP) NEW YORK - Four lawmakers sued the city Monday over its handling of the Occupy Wall Street protests, saying police conduct is so problematic that the force needs an outside monitor.

The city and police violated demonstrators' free speech rights, used excessive force, arrested protesters on dubious charges and interfered with journalists' and council members' efforts to observe what was going on, the four City Council members and others say in the federal civil rights suit.

"This unlawful conduct has been undertaken with the intention of obstructing, chilling, deterring and retaliating against (the) plaintiffs for engaging in constitutionally protected protest activity," says the suit, which was filed a day before Occupy and labor activists planned a large May Day march.

Mayor Michael Bloomberg has defended police handling of the protests.

"This police department knows how to control crowds without excessive force. . They do allow you to protest, but they don't let it get out of hand," he said after some council members complained about what they called police brutality at a March Occupy demonstration.

While Occupy activists have gone to court before over particular episodes in the movement's contentious history with the city, the new lawsuit is a nearly 150-page compendium of complaints, amplified by the council members' participation. A local Democratic Party official, freelance journalists and Occupy activists also are plaintiffs.

Their criticisms range from a police official's much-discussed use of pepper spray on penned-in protesters in September to the temporary removal of demonstrators from Manhattan's Union Square in March.

City council members and other elected officials have sued the city before — over a Bloomberg-led 2009 change to term limits, among other things.

Still, the council members' involvement in the Occupy suit helps dramatize its argument that police oversight is so ineffective it warrants a court-appointed monitor. The officials want an independent eye to review all of the more than 2,000 Occupy-related arrests and to explore the sometime closures of Zuccotti Park and some other public spaces.

Occupy: What to expect in May Day "general strike"
Occupy movement set for return to the streets
Using social media to monitor Occupy movement

"We need accountability, we need relief . and we're not going to just sit idly by," Williams said.

He and Mark-Viverito were among dozens of people who calmly sat down in a roadway near the Brooklyn Bridge during a Nov. 17 demonstration. Their disorderly conduct cases are on track to be dismissed if they avoid rearrest.

Rodriguez, meanwhile, was accused of resisting arrest while trying to get to the protesters' encampment in lower Manhattan's Zuccotti Park as police uprooted them Nov. 15. He emerged with visible scrapes to his head and said police assaulted him. Prosecutors recently dropped the charges against the councilman, saying they couldn't secure the testimony of a key officer in the incident.

"I feel that the NYPD misused its powers," he said.

Some state legislators also have proposed an independent inspector for the New York Police Department, citing the Occupy protests and other issues.

The lawsuit, crafted by attorneys Leo Glickman, Yetta Kurland and Wylie Stecklow, also seeks unspecified damages and court orders about access to public spaces and other issues in the case.

The lawsuit was filed the same day as another lawsuit by five individuals who said their constitutional rights were violated when police officers kept them inside an area surrounded by metal barricades for nearly two hours on Nov. 30 as they tried to participate in an Occupy Wall Street demonstration. The lawsuit in federal court in Manhattan sought unspecified damages and class action status.

The city Law Department said Monday it had not yet seen either lawsuit and was awaiting an opportunity to review each.