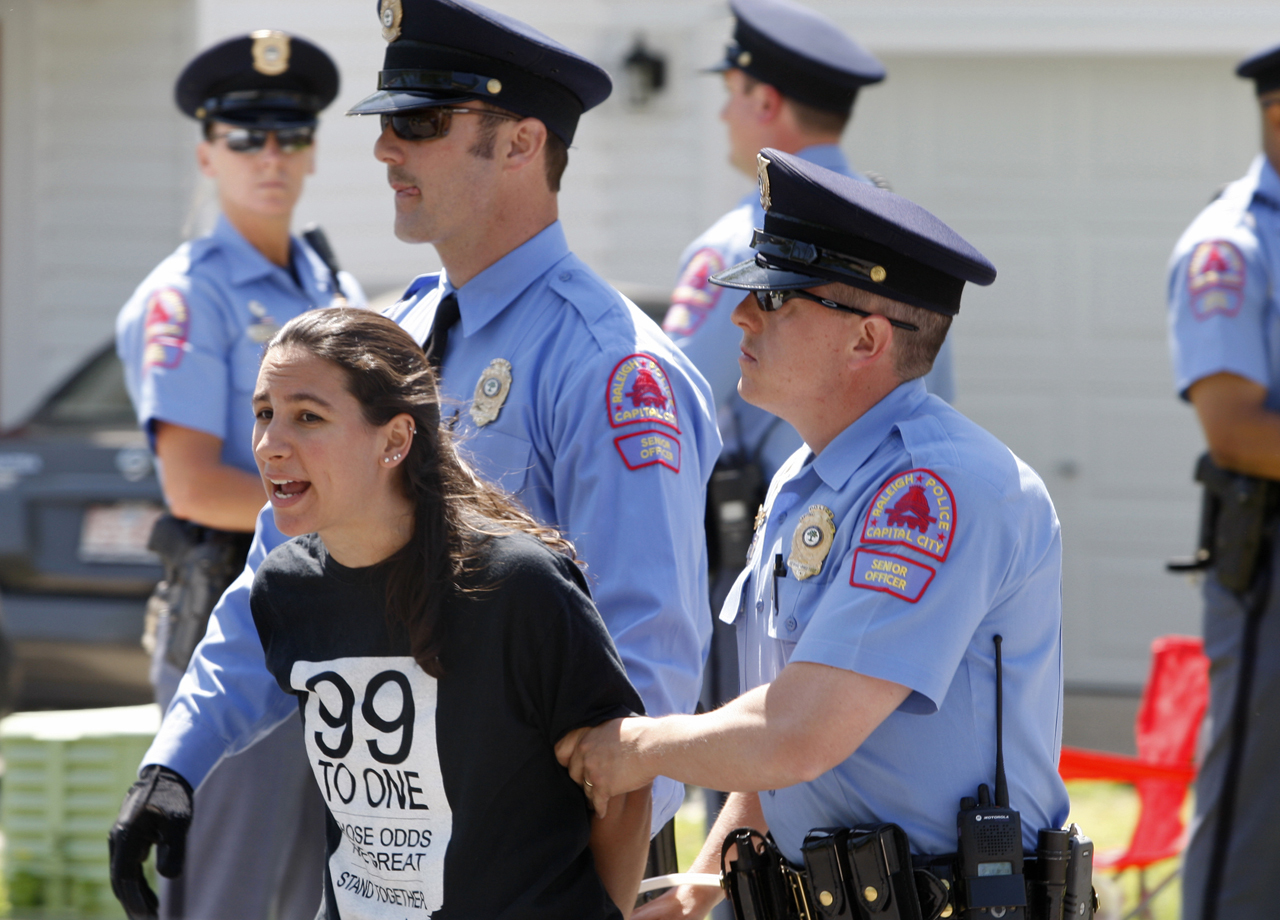 Gone are the days when celebrities like Kanye West showed up in Zuccotti Park to show their solidarity - if not much of an actual connection - with "the 99 percent." Gone are the breathless news reports about whether Occupy was about to remake the political system, and, just maybe, society as a whole. Gone, for many, is the notion that the movement even matters: A poll earlier this month found that a majority of Americans say Occupy has run its course.

But Occupy has persisted even as officials around the country have uprooted the encampments designed to present a physical manifestation of festering anger over inequality. And on May 1 - the left-wing/labor holiday known worldwide as May Day - the movement is poised to push into the public consciousness once again, with a "general strike" in more than 125 cities for which supporters are being asked to skip work and school in order to take "the struggle against an inhuman system" back into the streets.

In New York, signs have gone up around the city with this message: "No Work, No School, No House Work, Don't Bank, Don't Buy." Organizers say they hope to see 30,000 people converge on Union Square in the late afternoon, after a day of "direct action," to listen to speeches and see music acts before marching south to Wall Street.

The May Day strike represents a combined effort between groups that include Occupy protesters, the immigrant rights movement and the established labor movement, which has largely embraced Occupy's message and tactics. For union members, the "no work" part of the equation is complicated: Under the Taft-Hartley Act of 1947, union members could run afoul of the law for participating in the general strike. Organizers are encouraging union workers to participate in whatever way they can without putting themselves at risk, urging them to think about calling in sick, taking a personal day or leaving work early in order to participate in the day's activities.

The strike is potentially particularly fraught for immigrant rights activists who do not have legal status. Among the planned activities is a blockage of "one or more" of the bridges and tunnels that goes into Manhattan - an action that could result in the arrest of hundreds of protesters, as it did when they took to the Brooklyn Bridge last fall.

Organizers say they are trying to emphasize the risk so that illegal immigrants don't put themselves in a position where they could risk deportation.

"There's been a lot of emphasis for those who are taking part in the direct action on making sure that those who want to partake do so in such a way that doesn't jeopardize undocumented workers," said Occupy activist Shane Patrick.

The value of provocative actions such as the blockade is very much up for debate within the movement. "If you're being realistic about it, the time that Occupy has gotten the most attention is when it has had confrontations with police," says graduate student and Occupy organizer Matt Canfield. "I don't think they're going to purposefully provoke, but direct action is a big part of this. Direct nonviolent action often entails police confrontation."

Indeed, the Occupy movement first gained national attention thanks to confrontations with police - including the aforementioned Brooklyn Bridge incident, the pepper spraying of a seemingly well-behaved protester, and clashes with police seeking to clear out Occupiers in New York, Oakland and elsewhere. Yet according to Elisabeth Jacobs, a fellow at the Brookings Institution who has studied the movement, the planned blockade could do more harm than good.

"People have limited patience for civil disobedience that gets in the way of their everyday lives," she said. "It's going to cause a giant headache for a lot of working people and I'm not sure it will have the same payoff in terms of creating energy and movement...I worry that given the status of the movement in people's mind that it has the potential to brand them as sort of trivial hippy anarchists with very little regard for working people's necessities."

Members of the Occupy movement hold fast to what they call a "horizontal" organizing framework, with no top-down command structure. (Occupiers stress that they do not want to be "co-opted" into such a structure, something many say has happened to the Tea Party movement. Some worry that groups like MoveOn and organized labor have already gone too far.) That means that a central figure couldn't really stop the planned blockade even if he or she wanted to. Patrick stresses that those who are planning the blockade are acting "autonomously," though he stresses that "there is a general understanding that people respect the diversity of tactics."

Asked how the NYPD is preparing for the May Day activities, Deputy Commissioner Paul J. Browne said, "[t]he NYPD accommodates lawful protest, and arrests those who break the law." He continued: "Some OWS elements have proposed unlawful activity, but the labor umbrella group seeking a permit for a march and rally has attracted thousands of lawful participants to similar events over the past seven years." (Large banks that expect to be targets of renewed protests in May have taken matters into their own hands, reportedly banding together to gather intelligence on the movement and track protesters. )

Occupy's continued refusal to transform itself into a more institutionalized movement - one with clear demands and positions, direct ties to current and potential elected officials and a willingness to work within the current system - reflects the fact that "any type of movement for social change has to reflect the types of organizing and politics that we want to see in our political system," according to Canfield. Does the refusal to play by the rules as they now stand mean the movement risks trivializing itself? "It creates challenges in scaling up to larger forms of governments," he allows. "But I don't think it eliminates them."

Jacobs, of the Brookings Institution, says "one of the great things about the movement was that it brought people who were disenchanted with the quote unquote system that they didn't engage at all." But she warns that the involvement of a variety of people with diverse agendas in a system with no top-down structure could also end up hampering the effort: "If involving those people means that it's impossible for them to communicate and behave in a way that shows they actually understand how things get done, it stays in a fringe space."

David Meyer, a professor at the University of California at Irvine who studies social movements, says there are "ways to lose" with both the Tea Party and Occupy strategies. "Occupy is desperately trying to avoid institutionalizing and getting sold out, and the risk is that you just become completely irrelevant," he says. Still, says Meyer, "You don't have to be directly running candidates to have candidates respond to you."

Democrats largely stopped identifying directly and publicly with the Occupy movement late last year, but you can hear echoes of its arguments in President Obama's rhetoric: The Buffett Rule, for example, is an effort to move toward a more equitable economic distribution through increased taxes on the highest earners. And Occupiers say the effects of the movement are being felt on a local level.

"I think that there's a lot of ways that the society is different already from Occupy," says Rose Bookbinder, an organizer with the United Auto Workers who has taken a central role in planning May Day activities. "People feel more empowered to speak up in their own cities and towns. People are out in the streets much more than they ever have been."

In the weeks and months leading up to May Day, small groups of Occupiers have been engaging in activities such as foreclosure blockades, in which they disrupt auctions of foreclosed homes and other aspects of the foreclosure process, infiltration of shareholder meetings at companies like Wells Fargo to protest foreclosure and lending policies, and small-scale protests on Wall Street. In New York, the May Day strike is the centerpiece of a "spring offensive" that has included protests against student debt, financial institutions and "dirty power" as well as a series of "99 picket lines" in which workers have sought improved labor conditions. (Above, students from Paul Robeson high school explain their plans to walk out of class in protest on May Day.)

Organizers stress that the May Day protests are simply one action among many - "another step forward, [not] the definitive or defining day by any extent," in Patrick's words. Still, there's no question that it has the potential to reengage those who largely forgot about the movement and its message when it faded from the public consciousness late last year. Meyer, of UC Irvine, says the march represents an opportunity to once again get the message out through the mainstream media - and not just to people who are "logged onto your Tumblr."

Indeed, May Day may well represent the Occupy's best chance to reclaim at least some of the broad cultural relevance it attained last year. Jacobs argues that it has already had an enduring impact, saying even those who are no engaged "had their worldviews slightly tweaked based on their experience with the movement." But she adds that if Occupy wants to be a significant force in the future, it needs to keep engaging with those beyond the sometimes self-indulgent activist left.

"People can get in their drum circle," she says, "but it's not necessarily going to move the ball forward."