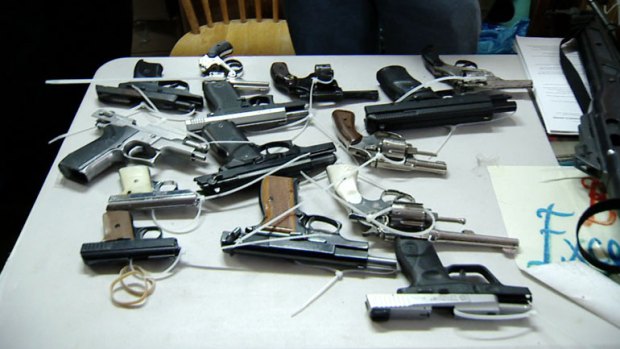 According to the latest General Social Survey, 32 percent of Americans either own a firearm themselves or live with someone who does, which ties a record low set in 2010. That's a significant decline since the late 1970s and early 1980s, when about half of Americans told researchers there was a gun in their household.

The General Social Survey is conducted by NORC, an independent research organization based at the University of Chicago, with money from the National Science Foundation. Because of its long-running and comprehensive set of questions about the demographics, behaviors and attitudes of the American public, it is a highly regarded source of data about social trends.

Data from the 2014 survey was released last week, and an analysis of its findings on gun ownership and attitudes toward gun permits was conducted by General Social Survey staff.

The drop in the number of Americans who own a gun or live in a household with one is probably linked to a decline in the popularity of hunting, from 32 percent who said they lived in a household with at least one hunter in 1977 to less than half that number saying so now.

But those are concentrated in fewer hands than they were in the 1980s, the General Social Survey finds. The 2014 poll finds that 22 percent of Americans own a firearm, down from a high of 31 percent who said so in 1985.

The survey also finds a shrinking gender gap in personal firearm ownership as a result of a decline in the percentage of men who own one, from 50 percent in 1980 to 35 percent in 2014.

Fewer women than men own guns, but the percentage among women has held fairly steady since 1980, with 12 percent now saying they personally own a gun.

Only 14 percent of adults under age 35, but 31 percent of those over age 65, say they personally own a gun. That gap has increased over time - in 1980, younger adults were only slightly less likely than older ones to report that they owned a gun.

The poll finds half of Republicans live in households with at least one gun, which is twice as high as ownership among Democrats or independents.

People in higher-income households are significantly more likely than those in lower-income households to own a gun, the survey finds. Gun ownership rates also vary by race, with 4 in 10 white Americans living in households with a gun compared with less than 2 in 10 blacks and Hispanics.

Support for requiring a gun permit climbed to a peak of 82 percent in the late 1990's, but has fallen since then. The 72 percent who support requiring a permit now is at its lowest level since 1987.