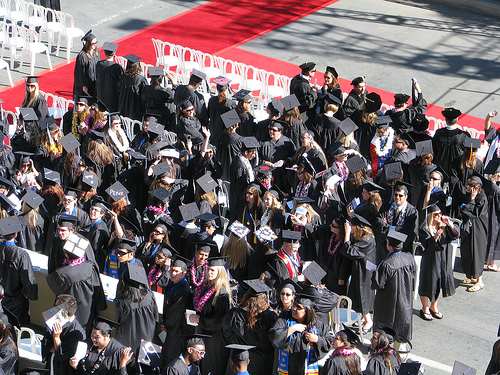 (MoneyWatch) The number of young Americans who have earned a college degree has increased, if only ever so slightly.

According to U.S. Census data, 39.3 percent of Americans between the ages of 25 and 34 had earned a post-secondary degree in 2010. That adds up to 5.9 million people. A year earlier, 38.8 percent of people in this age group possessed an associate, bachelor's, or graduate degree. The half percentage-point increase represents an extra 100,000 or so college graduates.

At this rate, the Obama administration's ambitious goal of having the U.S. lead the world in percentage of college graduates in 2020 appears less feasible. According to a 2010 College Board report, the U.S. ranks 12th among 36 developed countries in its share of adults ages 25 to 34 with a college degree.

In the 1980s, the U.S. was the undisputed leader in terms of having a college-educated workforce.

One significant impediment to producing more college grads is the cost of public universities and colleges, the institutions of higher learning attended by the vast majority of Americans. During the past year, according to the federal Department of Education, 40 states have shrunk their financial support for higher education. And over the most recent two years, four-year state universities have hiked tuition by an average of 15 percent.

U.S. Secretary of Education Arne Duncan will discuss these figures and college affordability on Friday at the annual conference of the National Governors Association.

"We've made some progress, but the combination of deep state budget cuts and rising tuition prices is pushing an affordable college education out of reach for middle-class families," Duncan said in prepared remarks.