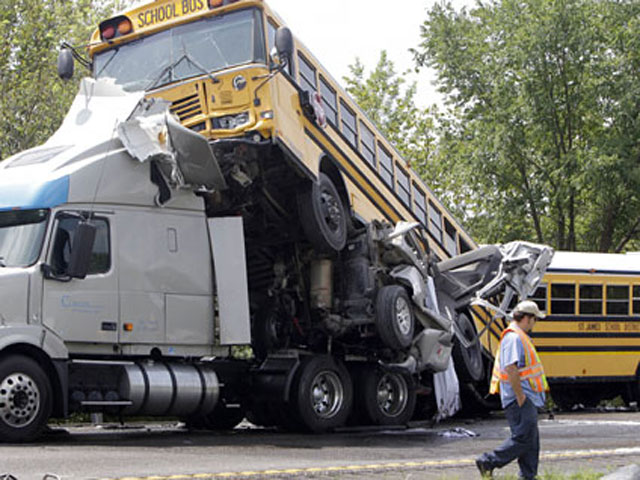 The driver sent six texts and received five texts, with the last text just before his pickup crashed into the back of a tractor truck, beginning a chain collision. The pickup was rear-ended by a school bus, which in turn was rammed by a second school bus.

The pickup driver and a 15-year-old student on one of the school buses were killed. Thirty-eight other people were injured in the Aug. 5, 2010, accident near Gray Summit, Mo.

Nearly 50 students, mostly members of a high school band from St. James, Mo., were on the buses heading to the Six Flags St. Louis amusement park.

The accident is a "big red flag for all drivers," National Transportation Safety Board chairman Deborah Hersman said at a meeting to determine the cause of the accident and make safety recommendations.

It's not possible to know from cell phone records if the driver was typing, reaching for the phone or reading a text at the time of the crash, but it's clear he was manually, cognitively and visually distracted, she said.

"Driving was not his only priority," Hersman said. "No call, no text, no update is worth a human life."

NTSB: Ban all driver use of cell phones
NTSB focuses on driver texting in Missouri crash

As a result of the discoveries about the accident, federal accident investigators are recommending states ban the use of cell phones and other electronic devices by all drivers except in emergencies. The board doesn't have the power to impose regulations, but its recommendations are heavily considered by lawmakers.

Investigators are seeing texting, cell phone calls and other distracting behavior by operators in accidents across all modes of transportation with increasing frequency. It has become routine for investigators to immediately request the preservation of cell phone and texting records when they launch an investigation.

In the last few years the board has investigated a commuter rail accident that killed 25 people in California in which the train engineer was texting; a fatal marine accident in Philadelphia in which a tugboat pilot was talking on his cellphone and using a laptop; and a Northwest Airlines flight that flew more than 100 miles past its destination because both pilots were working on their laptops.

The board has previously recommended bans on texting and cell phone use by commercial truck and bus drivers and beginning drivers, but it has stopped short of calling for a ban on the use of the devices by adults behind the wheel of passenger cars until today.

About two out of 10 American drivers overall - and half of drivers between 21 and 24 - say they've thumbed messages or emailed from the driver's seat, according to a survey of more than 6,000 drivers by the National Highway Traffic Safety Administration.

And what's more, many drivers don't think it's dangerous when they do it - only when others do, the survey found.

At any given moment last year on America's streets and highways, nearly 1 in every 100 car drivers was texting, emailing, surfing the Web or otherwise using a handheld electronic device, the safety administration said. And those activities spiked 50 percent over the previous year.

The agency takes an annual snapshot of drivers' behavior behind the wheel by staking out intersections to count people using cellphones and other devices, as well as other distracting behavior.