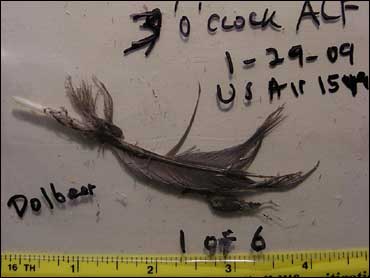 Federal safety officials said Wednesday they've confirmed there were birds in both engines of the US Airways airliner that ditched into New York's Hudson River last month.

The National Transportation Safety Board said remains from both engines have also been sent to the Smithsonian Institution in Washington to have the particular bird species identified.

Flight 1549's pilot, Chesley "Sully" Sullenberger, reported moments after taking off from LaGuardia Airport on Jan. 15 that the airliner had collided with birds and both engines had failed. All 155 people aboard survived the dramatic water landing, which was captured on security videos and viewed around the world.

The safety board also said that an engine surge experienced by the Airbus A320 two days before the accident was due to faulty temperature sensor. The sensor was replaced, and the engine was examined and found to be undamaged before being returned to service.

The plane's left engine has been shipped to the headquarters of the manufacturer, CFM International, in Cincinnati, where it is being torn down, the board said. However, the flight data recorder revealed no anomalies or malfunctions in either engine until Sullenberger reported striking birds, the board said.

Engine maintenance records also show the engines had been serviced in compliance with the Federal Aviation Administration's most recent safety directive, the board said.

Last week, the aircraft was moved from the barge where it had been docked in Jersey City, N.J., to a secure salvage yard in Kearny, N.J, where it will remain throughout the estimated 12 to 18 months the NTSB investigation could take.