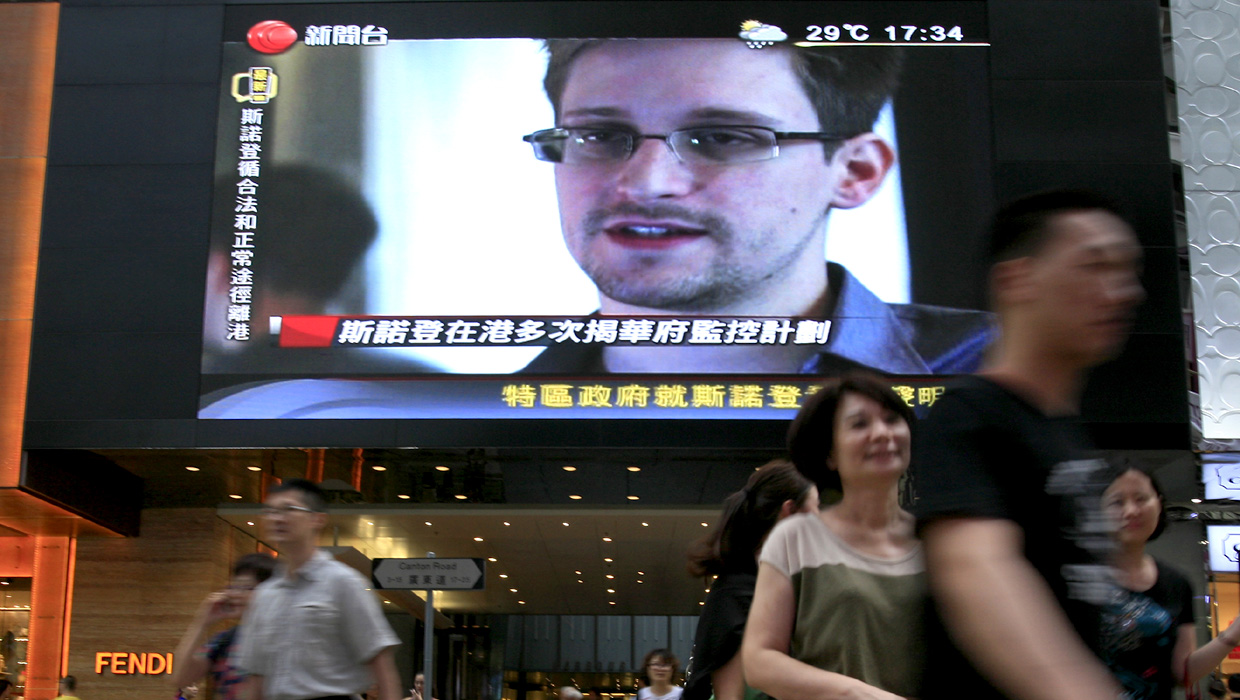 As an immigration reform bill putters slowly through GOP resistance in the Senate, and Vice President Joe Biden assures Americans he hasn't "given up" on gun control legislation despite six months' worth of failed bills in Congress, one man stands to mend years of partisan divide on Capitol Hill: Edward Snowden.

The former National Security Agency contractor wanted by the United States for leaking top-secret government surveillance programs reportedly arrived Sunday in Moscow from Hong Kong, where he had taken refuge. Anti-secrecy organization WikiLeaks, which claims it is helping Snowden evade extradition to the United States, said late Sunday in a statement that he is "bound for the Republic of Ecuador via a safe route for the purposes of asylum."

As the United States embarks on what could be a years-long manhunt for Snowden, charged with espionage, "the chase is on," Senate Intelligence Committee Chairwoman Dianne Feinstein, D-Calif., said on "Face the Nation." And for the first time in years, lawmakers from both ends of the Republican and Democratic parties are rooting from the same side of the stadium.

"I want to get him caught and brought back for trial, and I think we need to know exactly what he has - he could have a lot, lot more," Feinstein said, referring to classified information on NSA programs designed to track suspected terrorists by secretly culling U.S. phone records and mining user data from major Internet servers. Snowden, she said, could be in possession of more than 200 additional pieces of classified information that could "really put people in jeopardy."

"Whatever his motives are - and I take him at face value - he could have stayed and faced the music," she said. "He has taken an oath, and these oaths mean something. If you can't keep the oath, get out. And then do something about it in a legal way."

Joining with the majority of lawmakers who have argued NSA did not overreach on its surveillance tactics, Feinstein said the programs have played a role in disrupting more than 50 terrorist plots, and have oversight from not only the Justice Department, but independent inspectors general for the NSA. Still, she said her committee will meet July 10 with Army Gen. Keith Alexander, National Security Agency director, and Director of National Intelligence James Clapper to discuss possible adjustments to the transparency of these government programs.

"Regardless of what you feel about our NSA laws," though, Sen. Bob Corker, R-Tenn., said later on "Face the Nation," "I don't know how anybody can view this person as anything other than a criminal. ...If he views himself as not one, I hope he'll come back and make his case. But certainly he's not exuding the characteristics of any kind of 'hero,' if you will, to anybody in our nation, I hope."

It's a view that's breeding unlikely alliances in Washington: House Minority Leader Nancy Pelosi, D-Calif., was heckled at a progressive conference Saturday after stating that Snowden broke the law. "I know that some of you attribute heroic status to that action," she said of Snowden's leaks. "But, again, you don't have the responsibility for the security of the United States. Those of us who do have to strike a different balance."

Even Rep. Michele Bachmann, R-Minn., an icon of the tea party movement devoted to combating government overreach, lashed out at Snowden last week, labeling him "absolutely" a "traitor."

"I cannot underscore enough how highly dangerous this was to America's national security," Bachmann told Fox News on Tuesday. "These were important tools that we had at our ready to be able to use to thwart terror attacks. We need to focus on the fact that we cannot allow people to be in positions of sensitive information and to be able to betray the American trust the way that Snowden did. He's clearly a traitor."

There are outliers. Sen. Rand Paul, R-Ky., whose father, former Rep. Ron Paul, R-Texas, enjoyed donations from Snowden during a bid for the White House, has publicly defended Snowden. On CNN's "State of the Union" Sunday he opined that if Snowden ventures "to an independent third country like Iceland, and if he refuses to talk to any sort of formal government about this, I think there's a chance he'll be seen as an advocate of privacy.

"If he cozies up to either the Russian government, Chinese government or any of these governments perceived still as enemies of ours," he continued, "I think that will be a real problem for him in history."

Russia's entrance into the storyline has similarly spawned bipartisan ire.

Appearing on NBC's "Meet the Press," House Intelligence Committee Chairman Mike Rogers, R-Mich., said it "wouldn't surprise me" if Russian President Vladimir Putin had advance knowledge of Snowden's plan to travel to the country: "Russia is a country that wants to get back on the world stage, and I don't think they really care if they do it in a way that's in the best interest of good citizenship around the world," Rogers said.

"I'm sure they would love to have a little coffee and a few conversations with him," he continued. "That's why this is so serious and why we need to be so aggressive in making sure that people understand the difference between somebody who betrays their country and gives secrets away that will protect American lives at the expense of whatever he hopes to gain in the company of the Russians."

Sen. Chuck Schumer, D-N.Y., on "State of the Union" accused Putin of "sticking a finger" in the eye of the United States by allowing Snowden to land in Moscow.

"The bottom line is very simple: allies are supposed to treat each other in decent ways," Schumer said. "And Putin always seems almost eager to put a finger in the eye of the United States, whether it is Syria, Iran and now of course with Snowden. That's not how allies should treat each other, and I think it will have serious consequences for the United States-Russia relationship."

And on "Fox News Sunday," Sen. Lindsey Graham, R-S.C., argued that Russia "wants to be part of the world community," but needs to know that ramifications will be employed if they aid and abet Snowden: "I hope we'll chase him to the ends of the earth, bring him to justice," Graham said, "and let the Russians know there will be consequences if they harbor this guy."