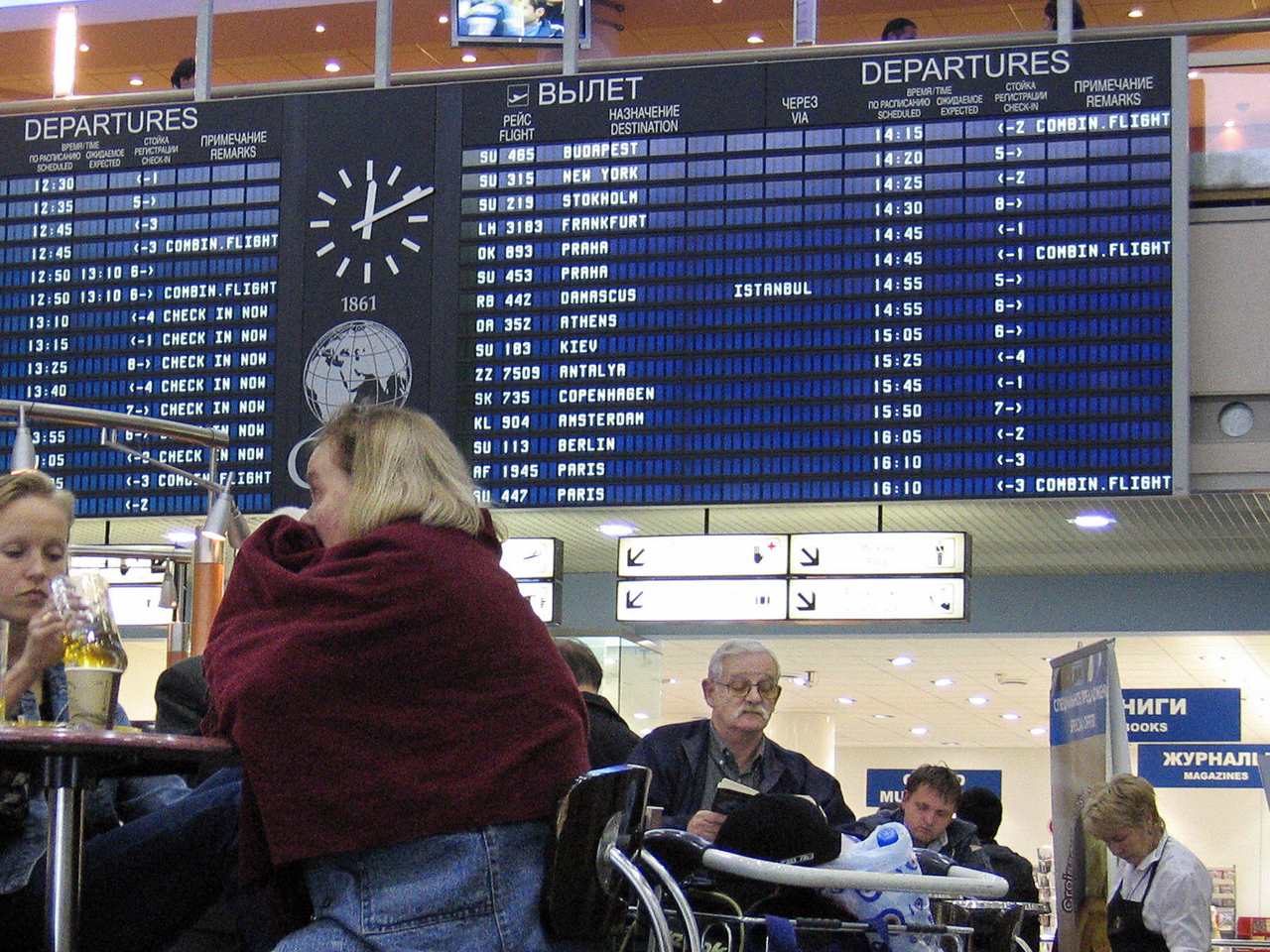 Anti-secrecy organization WikiLeaks, which claims it is helping Edward Snowden evade extradition to the U.S., said late Sunday in a statement that Snowden "is bound for the Republic of Ecuador via a safe route for the purposes of asylum." CBS News correspondent Charlie D'Agata reports he will spend tonight in a transit side hotel inside the Moscow airport before continuing his journey.

Ecaudor's foreign minister, Ricardo Patino Aroca, said on Twitter after Snowden's arrival in Moscow that his government received an asylum request from Snowden.

The United States has officially revoked his passport, reports CBS News correspondent Margaret Brennan, although that would be unlikely to hinder Snowden's ability to travel to a country that wanted him. The revocation of his passport does not affect Snowden's citizenship status, a State Department spokesperson said.

CBS News senior White House correspondent Major Garrett reports there have been no phone calls from Obama to any nation involved or potentially involved in the Snowden situation.

"We are not going to try to predict Russian behavior," the official said. "But, of course, there is still plenty of time for (Russian authorities) to expel him back to the U.S. if they choose to do so."

WikiLeaks said Snowden is being "escorted by diplomats and legal advisers from WikiLeaks," and that "once Mr Snowden arrives in Ecuador his request will be formally processed."

The online organization's founder, Julian Assange, has been holed up in Ecuador's embassy in London, battling an extradition request from Sweden, where he is wanted for questioning in a pair of sexual assault cases.

Snowden has said in recent interviews that Iceland was also a destination he preferred. Kristinn Hrafnsson, an Icelandic journalist and WikiLeaks spokesperson, told CBS News on Sunday that he had shepherded a request for asylum in Iceland to its government, but the request was snagged on a procedural hurdle; in order to request asylum from Iceland's government, one must already be in Iceland, according to Hrafnsson. Regardless, "Ecaudor's authorities have been very supportive of the ideals of WikiLeaks," which is why they and Snowden decided it is the likely best destination for him.

The U.S. called for countries in the Western Hemisphere to not to let the former spy agency contractor go anywhere but home, a State Department official said Sunday afternoon. The spokesperson did not identify which countries they were referring to.

"The U.S. is advising these governments that Snowden is wanted on felony charges, and as such should not be allowed to proceed in any further international travel, other than is necessary to return him to the United States," the official said in a written statement.

Snowden was spending the night in Moscow's Sheremetyevo Airport and was booked on an Aeroflot flight to Cuba on Monday, the Russian news agencies ITAR-Tass and Interfax reported, citing unnamed airline officials. Aeroflot has no direct flights from Moscow to Quito, Ecuador; travelers would have to make connections in Paris, Rome or Washington, which could be problematic for Snowden.

A spokesman for Russian President Vladimir Putin said he was unaware of Snowden's whereabouts or travel plans.

Early Sunday morning, Hong Kong officials said Snowden had been allowed to leave for a "third country" because a U.S. extradition request did not fully comply with their laws. Snowden had been in hiding in Hong Kong for several weeks since he revealed information on the highly classified spy programs.

"I want to get him caught and brought back for trial, and I think we need to know exactly what he has - he could have a lot, lot more," Feinstein said on CBS' "Face the Nation." "But I think the chase is on."

CBS News' Major Garrett, also appearing on "Face the Nation," said: "The United States doesn't know what happened. It put together what it said and thought were really good charges that represented everything we could legally prosecute Edward Snowden under, thought there was an agreement with the Hong Kong authorities...It looks like there was a technicality."

Interpol said there is no public Red Notice -- an international alert that an individual is wanted for arrest by an Interpol member country -- at the moment for Snowden.

A U.S. Department of Justice spokesperson, Nanda Chitre, told CBS News they had been informed Snowden had left Hong Kong.

"We will continue to discuss this matter with Hong Kong and pursue relevant law enforcement cooperation with other countries where Mr. Snowden may be attempting to travel," Chindre said.

WikiLeaks, the organization that has released reams of classified material online from the U.S. government and others, claims to have aided Snowden in his flight. They released a statement saying he was bound for a "democratic nation via a safe route for the purpose of asylum."

An Aeroflot agent told Russia's Interfax news service that Snowden is traveling with one other person with the surname Harrison, but the agent declined to release the traveler's full name.

U.K. journalist Sarah Harrison is a known close adviser to WikiLeaks' founder Julian Assange, prompting speculation that she was with Snowden during his flight from Hong Kong. WikiLeaks tweeted out her profile Sunday morning, as well as another tweet asking followers to read about her "before the smears arrive."

The White House itself has not commented yet on Snowden's departure, which came a day after the United States made a formal request for his extradition and gave a pointed warning to Hong Kong against delaying the process of returning him to face trial in the U.S.

The Hong Kong government said in a statement that Snowden left "on his own accord for a third country through a lawful and normal channel."

It acknowledged the U.S. extradition request, but said U.S. documentation did not "fully comply with the legal requirements under Hong Kong law." It said additional information was requested from Washington, but since the Hong Kong government "has yet to have sufficient information to process the request for provisional warrant of arrest, there is no legal basis to restrict Mr. Snowden from leaving Hong Kong."

Russian officials have given no indication that they have any interest in detaining Snowden or any grounds to do so. Foreign Minister Sergey Lavrov has said that Russia would be willing to consider granting asylum if Snowden were to make such a request.

Russia and the United States have no extradition treaty that would oblige Russia to hand over a U.S. citizen at Washington's request.

WikiLeaks said it was providing legal help to Snowden at his request and that he was being escorted by diplomats and legal advisors from the group. Its founder, Julian Assange, who has spent a year inside the Ecuadorean Embassy in London to avoid extradition to Sweden to face questioning about sex crime allegations, told the Sydney Morning Herald that his organization is in a position to help because it has expertise in international asylum and extradition law.

The Cuban government had no comment on Snowden's movements or reports he might use Havana as a transit point.

"You have to have a country that's going to stand up to the United States," Ratner said. "You're not talking about a huge range of countries here."

Ratner said a country's extradition treaty with the U.S. is "not going to be relevant" because the country he ends up going to will likely be one willing to give him a political exemption.

At least 31 killed in stampede during charity event in southern Nigeria
Thanks for reading CBS NEWS.
Create your free account or log in
for more features.
View CBS News In
CBS News App Open
Chrome Safari Continue
Be the first to know
Get browser notifications for breaking news, live events, and exclusive reporting.