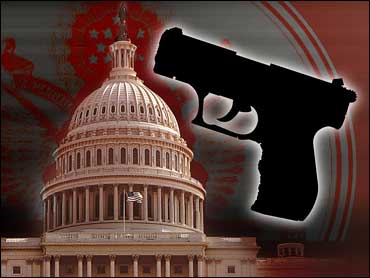 After 52 years in Congress, John Dingell knows it sometimes takes a "rather curious alliance," such as between the National Rifle Association and the House's most fervent gun control advocate, to move legislation.

That's what took place Wednesday when the House, by voice vote, passed a gun control bill that Rep. Dingell, D-Mich., helped broker between the NRA and Rep. Carolyn McCarthy, D-N.Y.

With the NRA on board, the bill, which fixes flaws in the national gun background check system that allowed the Virginia Tech shooter to buy guns despite his mental health problems, has a good chance of becoming the first major gun control law in more than a decade.

"We'll work with anyone, if you protect the rights of law-abiding people under the second amendment and you target people that shouldn't have guns," NRA chief Wayne LaPierre told CBS News Correspondent Sharyl Atkisson

"As the Virginia Tech shooting reminded us, there is an urgent national need to improve the background check system" to keep guns out of the hands of those barred from buying them, House Speaker Nancy Pelosi said.

The measure would require states to automate their lists of convicted criminals and the mentally ill who are prohibited under a 1968 law from buying firearms, and report those lists to the FBI's National Instant Criminal Background Check System, or NICS.

Seung-Hui Cho, who in April killed 32 students and faculty at Virginia Tech before taking his own life, had been ordered to undergo outpatient mental health treatment and should have been barred from buying the two guns he used in the rampage. But the state of Virginia never forwarded this information to the national background check system.

The House action came as a panel ordered by President Bush to investigate the Virginia Tech shootings issued its findings, including a recommendation that legal and financial barriers to NICS submissions be addressed.

Mr. Bush, in a statement, said the report made clear that better information sharing between federal and state authorities "is essential in helping to keep guns out of the wrong hands and to punish those who break the law." He said he was "closely following legislative efforts to strengthen the instant background check system."

The panel also urged federal agencies to expand programs to prevent school violence and said the Health and Human Services Department should focus on college students in its mental health public education campaign.

The House bill next moves to the Senate, where gun control advocate Sen. Charles Schumer, D-N.Y., says he is talking to NRA ally Sen. Larry Craig, R-Idaho, and there is a "very strong" chance of passage.

"When the NRA and I agree on legislation, you know that it's going to get through, become law and do some good," says Schumer.

The legislation requires state and federal agencies to transmit all relevant disqualifying records to the NICS database. It also provides $250 million a year over the next three years to help states meet those goals and it imposes penalties — including cuts in federal grants under an anti-crime law — on states that fail to meet benchmarks for automating their systems and supplying information to the NICS.

Virginia's Democratic Gov. Tim Kaine said Wednesday that in ordering state executive branch agencies to upgrade background check reporting last month he found that Virginia was one of only 22 states reporting any mental health information to the NICS. He said the House bill was "significant action to honor the memories of the victims who lost their lives at Virginia Tech."

"Millions of criminal records are not accessible by NICS," said McCarthy, sponsor of the bill.

"I came to Congress in 1997, in the wake of my own personal tragedy, to help prevent gun violence," said McCarthy, who ran for office after her husband was gunned down on a Long Island commuter train in 1993. "Ten years later, I am more committed than ever to this cause."

McCarthy has been among the leaders in the largely futile efforts to legislate gun controls during the past dozen years of GOP control. The last major gun control bill, to ban some assault weapons, passed in 1994, the last year of a Democratic majority. In 1996, domestic violence offenders were added to the list of those barred from buying guns. However, a 1999 effort to close the gun show loophole on background checks after the Columbine school shootings was unsuccessful.

The NRA worked closely with Dingell, a gun rights proponent and senior House member, in crafting the new bill. The NRA insisted it was not gun control legislation because it does nothing to restrict legal rights to buy guns.

The NRA has supported the NICS since its inception in 1993, said Wayne LaPierre, the organization's executive vice president. "We've always been vigilant about protecting the rights of law-abiding citizens to purchase guns, and equally vigilant about keeping the guns out of the hands of criminals and the mentally defective and people who shouldn't have them."

The NRA did win concessions.

The bill would automatically restore the purchasing rights of veterans who were diagnosed with mental problems as part of the process of obtaining disability benefits. LaPierre said the Clinton administration put about 80,000 such veterans into the background check system.

It also outlines an appeals process for those who feel they have been wrongfully included in the system and ensures that funds allocated to improve the NICS are not used for other gun control purposes.

That wasn't enough for the Gun Owners of America, which said on its Web page that it was the only national pro-gun organization to oppose the McCarthy bill. "There are some seemingly pro-gun congressmen who are driven to get anything passed, just so they can say they did something about Virginia Tech," it said.

On the other side, Paul Helmke, president of the Brady Campaign to Prevent Gun Violence, said his group supported the legislation, noting that the Virginia Tech shootings "tragically demonstrated the gaps in the system that allowed a dangerous person to be armed."

He said he hoped Congress and the gun lobby would go a step further and extend background checks to all gun sales, not just those by licensed dealers covered by current law.