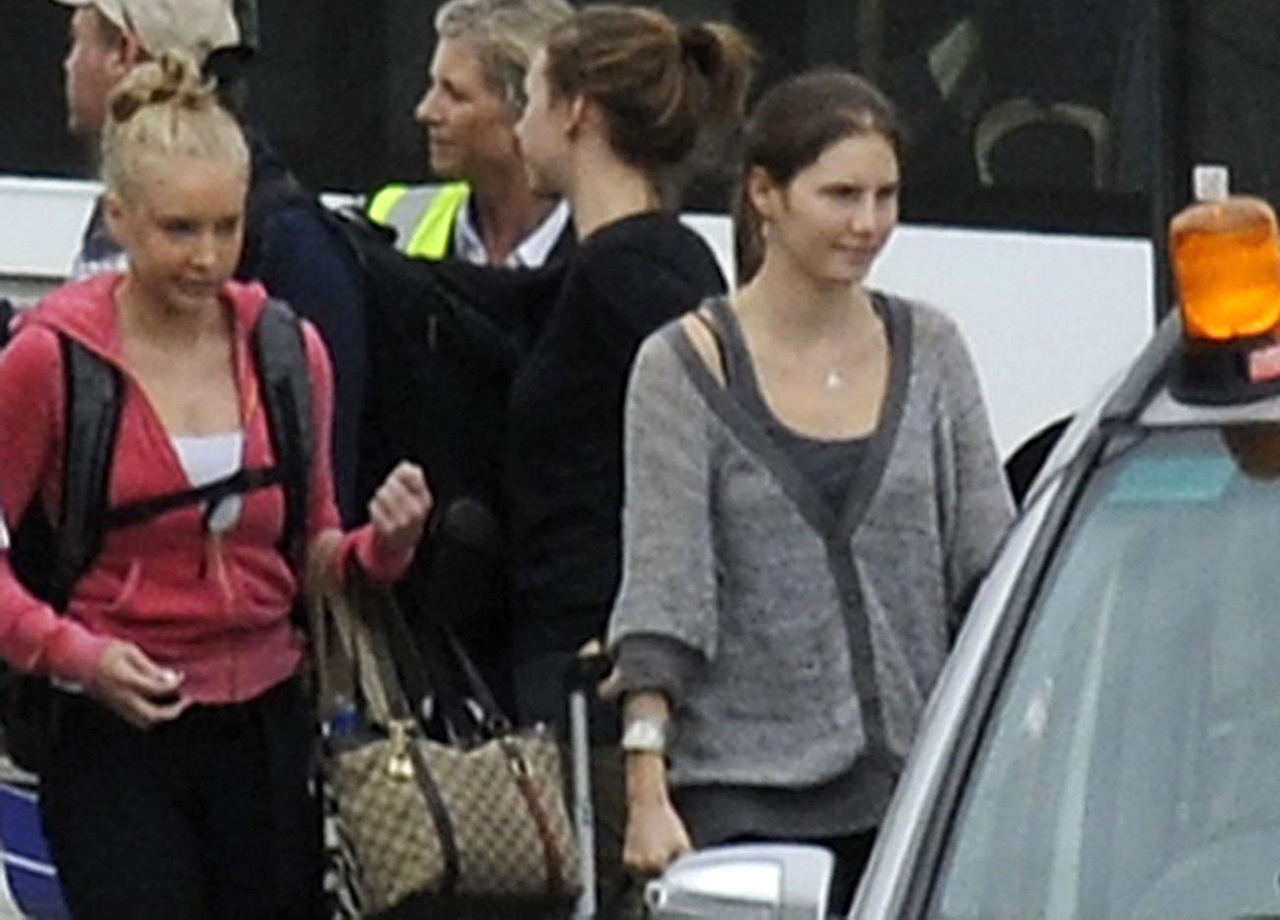 ROME - Amanda Knox flew home Tuesday after four years in an Italian prison, as the dramatic reversal of her murder conviction stunned the victim's family, angered the prosecution and left questions unanswered over who killed her British roommate.

Prosecutors who saw their case collapse over discredited DNA evidence have announced they are appealing the innocent verdicts of Knox and co-defendant Raffaele Sollecito to Italy's highest court.

Knox, cleared of the 2007 murder of Meredith Kercher by an appeals court on Monday night, flew from Rome to London, where she took a direct flight to Seattle, surrounded by family members.

Reporters on board the British Airways flight hoping to talk to Knox, now a tabloid staple on two continents, were blocked on the stairs by a flight attendant who politely informed them that the family would speak publicly after the plane touched down at Seattle-Tacoma International Airport. It was unclear whether Knox herself would speak then.

Dave Marriott, a spokesman for Amanda Knox's family, says Knox and her parents are on a British Airways flight from London due to land at Seattle-Tacoma International Airport at about 5:15 p.m.

Marriott confirmed Tuesday morning that a news conference will be held at the airport about a half-hour after the plane lands.

He says Knox's parents, Curt Knox and Edda Mellas, and legal adviser Ted Simon are expected to speak to reporters. Marriott says whether Amanda Knox will talk is up in the air.

To Knox, the verdict means freedom after four years behind bars.

"Those who wrote, those who defended me, those who were close, those who prayed for me," Knox wrote in a letter released just hours before leaving the country, "I love you."

"During the trip from Perugia to Rome, Amanda was serene," said Corrado Maria Daclon, the secretary general of the Italy-US Foundation, who was with Knox in the car. "She confirmed to me that in the future she intends to come back to our country."

Knox is speaking to family and friends in a very "healthy, strong and happy voice" now that she's been released from an Italian prison, her friend Giulia Alagna told CBS' "The Early Show."

"We only had a couple minutes to talk, and it was very emotional," Alagna told "The Early Show" from Perugia, Italy. "Actually, hearing me emotional, the first thing she said was why I was sad. And I explained that I was actually happy for her.

"We were overjoyed and very happy for the family, and mostly very grateful that Amanda is in transit," said Tom Wright of the group Friends of Amanda Knox. "She is an extraordinary young woman and she will be welcome back to the community with open arms."

The group had created a website and support network for Amanda and her family. When asked if he thought the day of Knox's release would come, Wright told "The Early Show," "You bet we did, and we've been working very hard to make it happen.

"We will support her any way she feels is appropriate," Wright said. "At some point there will be a celebration at a time and place of her choosing."

Knox and her former boyfriend Sollecito were convicted in 2009 of sexually assaulting and murdering Meredith Kercher, a 21-year-old British student who shared an apartment with Knox in Perugia. Knox was sentenced to 26 years, Sollecito to 25. (Click player at left to watch Kercher family give statement)

During the appeal of their conviction, the prosecution's case was blown apart by a court-ordered DNA review that discredited crucial genetic evidence used to convict the two.

The jury in the appeals court in Perugia overturned the convictions on Monday, and immediately ordered the two set free.

The jury upheld Knox's conviction on a civil charge of slander for accusing bar owner Diya "Patrick" Lumumba of carrying out the killing. But the judge had set that sentence at three years, less than the time Knox had already served in prison.

Two hours later Knox was in a dark limousine that took her out of the Capanne prison just outside Perugia and headed to Rome. She had been in prison since Nov. 6, 2007, four days after Kercher's body was found at the apartment.

Hundreds of inmates — most of them in the men's wing — shouted "Amanda, ciao!" and "Freedom!" as she walked into the central courtyard, said Corrado Maria Daclon, head of the Italy-US Foundation, which championed Knox's cause.

"They were screaming like crazy," said Daclon, who accompanied Knox in her first hours of freedom. Dalcon said Knox jumped a little for joy and waved to the prisoners.

Prosecutor Giuliano Mignini told the Associated Press Tuesday that he planned to appeal the not guilty verdict to Italy's highest court, but that process won't begin until the appeals court issues a complete explanation as to how it arrived at Monday's decision.

"Let's wait and we will see who was right. The first court or the appeal court," said Mignini, who himself received a 16-month sentence for abuse of office last year for ordering illegal wiretaps. He is appealing that conviction.

"This trial was done under unacceptable media pressure," Mignini said of the Knox appeal. "The decision was almost already announced; this is not normal."

While waves of relief swept through the defendants' benches in the courtroom, members of the Kercher family, who flew in for the verdict, appeared dazed and perplexed. Meredith's older sister Stephanie shed a quiet tear, her mother Arline looked straight ahead.

There was little joy Tuesday for the Kerchers as Knox and her family put Italy behind them, reports "48 Hours Mystery" correspondent Peter Van Sant.

Speaking at a hotel in Perugia Tuesday morning, Kercher's brother said the family felt as though they had been thrown back to "square one" after Knox and Sollecito's acquittal.

Kerchers "back at square one" after Knox verdict

"That's the biggest disappointment, not knowing still," said Meredith's sister Stephanie Kercher at the news conference. "Knowing that there is obviously someone, or people, out there who have done this."

Lyle Kercher said the family has been left to wonder who is guilty in the death of his 21-year-old sister. A third man, Rudy Hermann Guede, had been tried separately and convicted in the brutal slaying; however, his trial concluded he did not act alone. Guede is serving a 16-year sentence.

The Kercher family stressed that they respected the court's decision, and they wouldn't want anyone innocent spending time behind bars for no reason.

"We respect the decision of the judges but we do not understand how the decision of the first trial could be so radically overturned," the Kerchers said in a statement. "We still trust the Italian justice system and hope that the truth will eventually emerge."

A lawyer for the sole man now convicted for the stabbing death of Kercher, Ivory Coast native Rudy Hermann Guede, said Tuesday he will seek a retrial. Prosecutors had maintained Guede, Knox and Sollecito killed Kercher during a lurid, drug-fueled sex game.