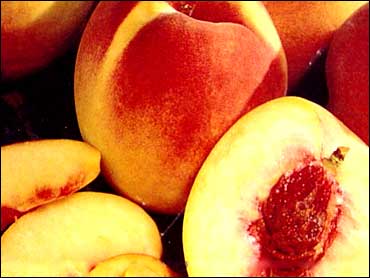 Atlanta is where most tourists wind up, but to get a real flavor of Georgia, head to the back roads, Thomasville and Musella - a town in the peach state, where life is just peachy and another where the past comes alive.

Those are two places that correspondent Debbye Turner visited for the series "Best of America."

Driving through the town of Thomasville, Ga., past antebellum homes and the grand plantations, it's like you're in another era.

Thomas Hill, director of the Thomasville History Museum, tells Turner there is a bit of a time warp there. "There's a lifestyle that goes on here right out of the movies," he says. A movie in particular that comes to mind is "Gone With The Wind."

So it's hardly a coincidence that at the Showboat Theatre, on the Melhana Plantation that Fran Lewis and her husband now own, the first private viewing was of the classic film, she says and notes, "It is a neat claim to fame."

The grand exterior of the Melhana is like "Gone With The Wind" come to life, Hill says, "to a very large extent. And I will assure you that Scarlet would have been tickled pink living south of Thomasville."

At the local history museum, plantation photos are on display that show Thomasville playing host to presidents and one very notable first lady: Jackie Kennedy, who visited there after the assassination of her husband.

Hill says, "It's one of the few places that Miss Jackie could come and get away from the press, and she was here for six weeks before anybody in Thomasville knew she was here."

Showing a picture of the late first lady, Hill says, "Just before she left to go home, she went to the little Catholic church here."

Only then was the secret out, and the photo that was taken was shown worldwide.

So Thomasville isn't just a getaway. It's a place to literally get away! The pace is slow. People get along. Thomasville is proud of its racial diversity, but there's no denying how the plantations came into being.

"Yes, it was slavery," says Jack Hadley. "It was built on slave labor."

Hadley was born on the Pebble Hill plantation, and he offers formal and self-guided tours that highlight the town's black history, like a room schoolhouse.

And he notes not just black kids need to know the black history, but, "all the kids, all races," he says.

While most southern plantations broke up long ago, the ones in Thomasville seem frozen in time. Melhana is one of the few plantations that welcomes overnight guests.

"Peaceful," is how Fran Lewis describes her plantation. "We have our guests say that we are very close, yet we are a world away. The clay roads, the beautiful oak trees with the Spanish moss, we feel like you have to come to the more rural areas to see what Georgia really is."

And to really experience the peach state, Turner headed to the heart of peach country: Musella, Ga., home of Dickey Farms.

"It is a lot of peach tradition around this part of Georgia," says Robert Dickey. His family has been in business for more than a century. This time of year, the farm employs 150 Musella residents.

And what's the population?

"Well, it's probably not much more than two to three hundred," Dickey says with a laugh, which means at least half of the population is picking peaches.

"And the other half are eating peaches," Dickey says and laughs.

He notes the average person comes and sees what they do and enjoys the operation. He says, "It's a real novelty now. You don't have that much peach growing all over the state like we used to."

In Musella, you can buy them almost literally off the tree.

Asked how many things that can be done with a peach, Dickey says, "Peach pie, peach cobbler, peach ice cream, peach daiquris, peach preserves, peach jelly, peach barbecue sauce. We've got them all, I tell you."

What does he dream about? "Peaches," Dickey exclaims and laughs.

July is peak season for fresh peaches, and if you can't get there in time, Dickey Farms ships all over the country.

And click on the links in red below to find more information about: