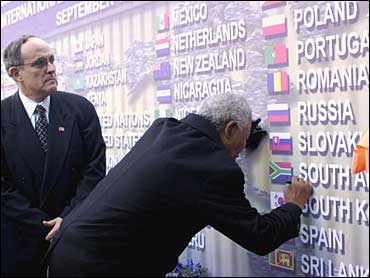 Last year, Kazusada Sumiyama and his wife, Mari, made their first visit to New York. Their son Yoichi had been transferred there, and he showed them all the sights - Battery Park, the Statue of Liberty, the Fourth of July fireworks.

It was a wonderful day.

It was also the last time they ever saw Yoichi alive.

Yoichi, who worked at the branch of a Japanese bank in the World Trade Center, was one of the hundreds of foreigners killed when terrorists crashed their planes into the towers nearly a year ago.

For the relatives of those who died so far away -- and in an attack that wasn't even directed at them, but at America -- the passage of time has done little toward ending their grief.

"Physical problems are curable, things like not being able to talk or not having an appetite," Mrs. Sumiyama said. "But deep down in my heart, there is something stagnant that's always there, that doesn't leave my mind. This is something that I must carry with me forever."

Her pain is shared around the globe.

All told, nearly 500 foreigners from 91 countries lost their lives in the Sept. 11 attack.

Tom Clarke, a 29-year-old London journalist whose sister died in the World Trade Center, helped establish a support group for the families of British victims.

The group is working with the government to establish a permanent Sept. 11 memorial in London, and in June met with Kenneth Feinberg, administrator of the U.S. government's victim compensation fund.

Clarke said most families had not yet decided whether to accept the payments from the fund, expected to average just over $1 million.

"People are still dealing with the raw, uncomfortable, difficult issues," said Clarke, who still finds it too difficult to talk about his sister.

Clarke, who returned to Britain 18 months ago after living in New York with his sister, said he will spend the anniversary of the attacks in Manhattan. The rest of his family, and most of the others in the British support group, will stay in Britain.

Family members from many of the 17 Mexican victims have visited New York since the attacks, and some have already received financial support, including a few hundred dollars from state governments in Mexico and aid from nonprofit groups.

But they have yet to receive money from the federal U.S. fund set up for victims and their families. While foreigners are eligible for such payments, a consulate spokesman said on condition of anonymity that payouts were being held up because some were illegal immigrants to the United States.

Half of the Japanese who were killed - including the Sumiyamas' son - worked for Fuji Bank, which had 700 employees in offices from the 79th to 82nd floors of the World Trade Center. Six Americans working for the bank died along with the 12 Japanese.

Yasushi Miyama, a spokesman for Mizuho Corporate Bank, Ltd., the name Fuji assumed after a merger, said the company was able to keep going that day because it moved its computer center to a separate location after the 1993 World Trade Center bombing.

"Our operation never stopped," he said. "Even on the day of the attacks, we had transactions from our computer center in New Jersey."

But he added that the memory of the dead remains vivid.

"We have filled the posts with other employees, but we will never be able to recover the losses of those who died," he said. "I think it is important not to forget about Sept. 11th, and to recall it on occasions. But it is too early to talk about it now."

Miyama said the bank, which held a memorial for the victims in Tokyo in February, is now looking for new offices. Out of deference to those who survived the attack, it will probably not relocate to a building with more than 30 floors.

He refused to disclose details of the kind of support the bank provides to the families of the victims, saying only that, "we are providing enough support, including financial support."

Four families of the Japanese victims have been found eligible for workman's compensation from the government, but experts say what the bereaved families need is not just financial help, but also mental support.

"They lost loved ones. It's not just an issue of money," said Koji Ogawa, spokesman for Ashinaga, a private group that provides scholarships and support for children who have lost their parents.

Ashinaga held an international camp in August for 85 children, including seven from New York who lost their parents in the attacks and nine orphans from Afghanistan.

The Sumiyamas - who lost their son Yoichi - refused to discuss compensation. But they said that one thing, more than any other, has helped them move closer to putting the tragedy behind them.

In April, Fuji told them that, unlike many other victims whose remains will never be found, part of Yoichi had been recovered. They immediately flew to New York to claim the remains at the medical examiner's office.

"Even if it's only a part of his body, it made a big difference, psychologically. We had wanted to do something for him, but we weren't sure how," said Mr. Sumiyama. "Even if we wanted to pray, we couldn't; we wanted to offer flowers, we didn't know where to offer them."

Now, Yoichi's ashes are on a sideboard in their small dining room, inside a bronze urn inscribed with his name and "1967-2001." In front of the container is a picture of Yoichi, smiling. Behind it, a painting of the towers by Japanese artist Hiro Yamagata.

Three teddy bears sent from American volunteers and a yellow T-shirt Yoichi wore are also on the sideboard.