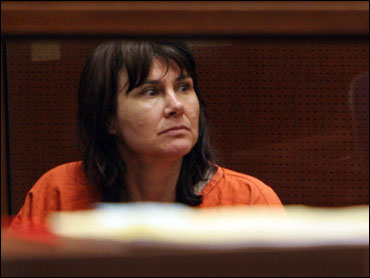 LOS ANGELES (CBS/AP) In a case that could be mistaken for pulp fiction, a veteran police detective pleaded not guilty Monday to murder in the 1986 killing of her ex-boyfriend's wife 23 years ago.

It's a case that went cold, and that, because of a family's persistence, an internal LAPD investigation and a DNA hit, is now resurrected from the dead.

Stephanie Lazarus, 49, remained in custody without bail this week pending a July 21 hearing on a prosecution motion to get dental impressions from the detective.

A hearing will also be set to determine if there is enough evidence for her to stand trial in the case—which involves what the victim's family describe as an obsessive crime of passion.

Lazarus was charged with capital murder in the Feb. 24, 1986, shooting death of Sherri Rasmussen, 29, a hospital nursing director, at the victim's condo in Van Nuys.

Rasmussen was shot three times, including in the heart and spine. There was gunshot residue on her hands, suggesting she had been gripping the gun from the front.
The detective was recently connected to the crime through a DNA match of saliva taken from bite marks on the victim, Deputy Chief Charlie Beck said earlier.

Defense attorney Mark Overland told reporters Monday that Lazarus, a 25-year veteran of the department, was "anxious to get this to trial." 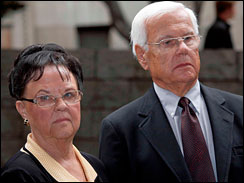 (AP Photo/Nick Ut)
Parents of shooting victim, Sherri Rasmussen, Neil Rasmussen, and his wife Loretta.
The murder charge includes the special circumstance allegation of murder during the commission of a burglary. Lazarus also faces a separate allegation of personal use of a handgun.

Prosecutors are expected to decide later whether to seek the death penalty.

Rasmussen's body was found by her husband of three months, John Ruetten. Before he married Rasmussen, Ruetten and Lazarus had been involved, detectives have said.

Lazarus was not a suspect in 1986 because detectives believed that two robbers who had attacked another woman in the area were to blame, police said.

Attorneys for the victim's parents have asked for an investigation into the way the case was handled. When Rasmussen's father told authorities to investigate Lazarus years ago, he was allegedly told he was "watching too much TV."

Lazarus, who has been in custody since her arrest on June 5, was an expert in cases involving art forgeries and married a fellow officer who knew nothing about the killing, police said.

She was arrested by detectives who worked across the hall from her.

LAPD public information officer Richard French declined to provide details on her current status with the department because it is a personnel matter.