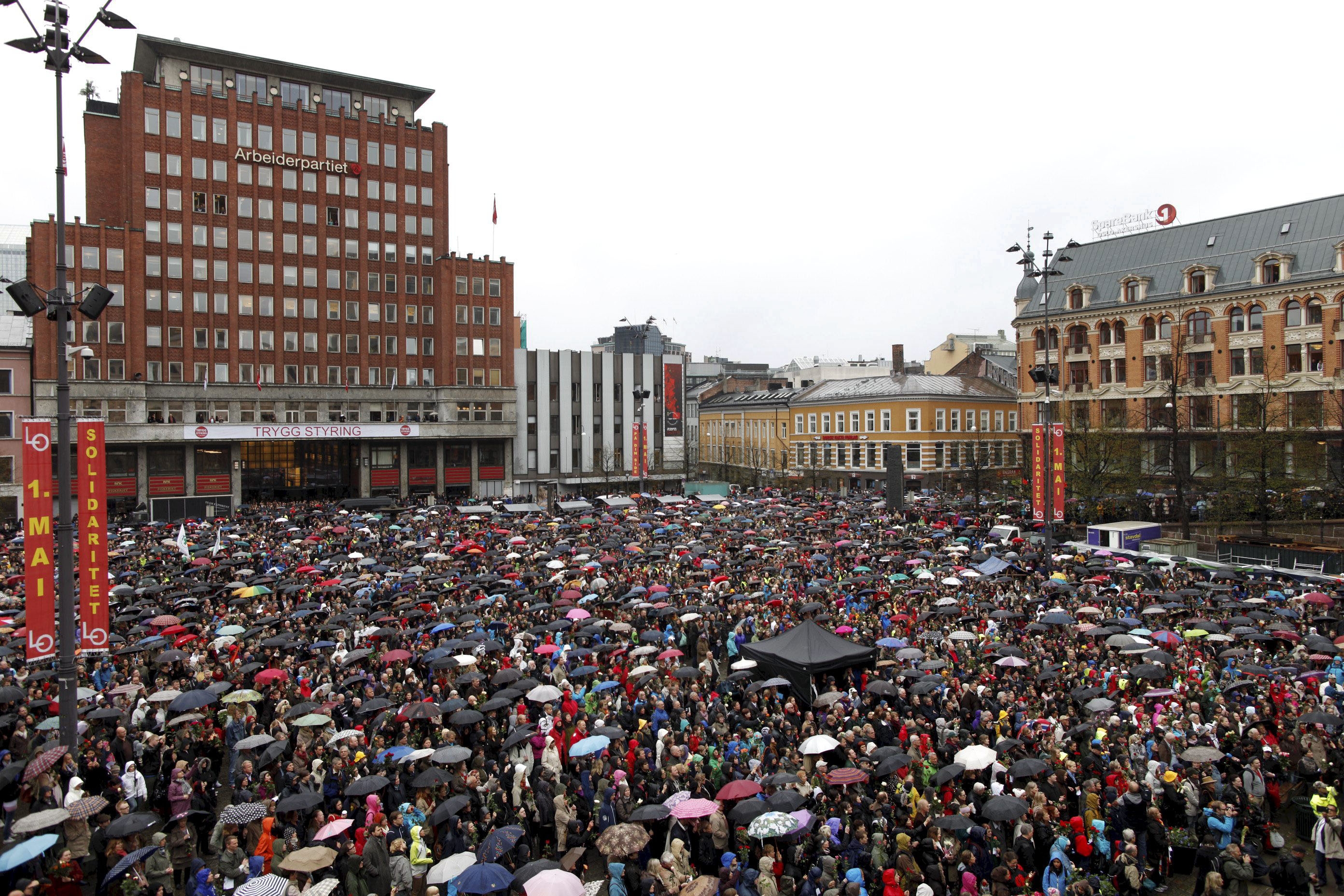 (CBS/AP) OSLO, Norway - Facing terror with music, tens of thousands gathered in squares across Norway to sing a children's song that gunman Anders Behring Breivik claimed is being used to brainwash young Norwegians.

The defiant Facebook protest against the right-wing fanatic took place as survivors gave tearful testimony Thursday in his trial for the July 22 bombing-and-shooting rampage that killed 77 people, mostly teenagers.

Some 40,000 people converged at a central square in Oslo in the pouring rain to sing the 1970's song "Children of the Rainbow" -- a Norwegian version of American folk music singer Pete Seeger's "Rainbow Race."

Folk singer Pete Seeger to be honored by arts academy

Singer Lillebjorn Nilsen, who popularized the song in Norway, led the protesters in singing through both the Norwegian and English versions, according to the English-language website Views and News from Norway (Watch video).

Later they were to lay roses on the steps of the courthouse in memory of those killed in the massacre.

In testimony last week, Breivik mentioned the song as an example of how he believes "cultural Marxists" have infiltrated Norwegian schools, triggering a Facebook intiative for Thursday's protests.

Shocked by Breivik's lack of remorse for his massacre, Norwegians by and large have decided the best way to confront him is by demonstrating their commitment to everything he loathes.

Anne Helene Lund, 24, was just 23 feet from the explosion. She was in a coma for a month, and when she woke up she had lost her memory, unable to even remember the names of parents.

Her father, Jan Erik Lund, also took the stand. Fighting tears, he described his mixed emotions at seeing his daughter with severe life-threatening brain injuries in the hospital.

"It was like experiencing the worst and the best in the same moment," he said. "It was fantastic that she was alive, horrible that she was as injured as she was."

Breivik says he was targeting the governing Labor Party, which he claims has betrayed the country by opening its borders to Muslim immigrants. He has shown no remorse for the attacks, which he coldly described last week in gruesome detail.

Since he has admitted to the attacks, Breivik's mental state is the key issue for the trial to resolved.

If found guilty and sane, Breivik would face 21 years in prison, though he can be held longer if deemed a danger to society. If declared insane, he would be committed to compulsory psychiatric care.

Breivik said Wednesday that being declared insane would be the worst thing that could happen to him because it would "delegitimize" his views.