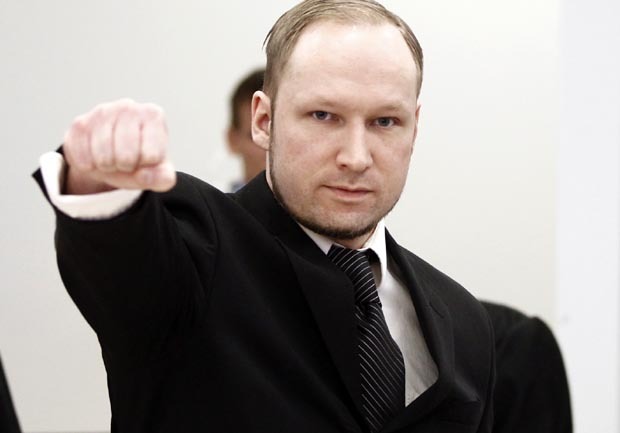 (AP) OSLO, Norway - Norway's prison terms are "pathetic," mass killer Anders Behring Breivik declared Wednesday in court, claiming the death penalty or a full acquittal were the "only logical outcomes" for his massacre of 77 people.

The right-wing fanatic said he doesn't fear death and that militant nationalists in Europe have a lot to learn from al Qaeda, including their methods and glorification of martyrdom.

"If I had feared death I would not have dared to carry out this operation," he said, referring to his July 22 attacks — a bombing in downtown Oslo that killed eight people and a shooting massacre at a youth camp outside the Norwegian capital that killed 69.

Breivik's comments, on the third day of his terror trial, came as he was pressed to give details on the anti-Muslim militant group he claims to belong to but which prosecutors say doesn't exist as he describes. Several unrelated groups claim part of that "Knights Templar" name.

The 33-year-old Norwegian acknowledged that his supposed crusader network is "not an organization in a conventional sense" but insisted that it is for real.

"It is not in my interest to shed light on details that could lead to arrests," he said refusing to comment on the group's alleged other members.

Breivik: I would have done it again"
Norway massacre trial judge removed over chat post
Norwegians suffering from Breivik fatigue

The issue is of key importance in determining Breivik's sanity, and whether he's sent to prison or compulsory psychiatric care for the bomb-and-shooting massacre that shocked Norway.

If found sane, Breivik could face a maximum 21-year prison sentence or an alternate custody arrangement that would keep him locked up as long as he is considered a menace to society. If declared insane he would be committed to psychiatric care for as long as he's considered ill.

"I view 21 years in prison as a pathetic sentence," Breivik said.

Asked by the prosecutor if he would rather have received a death penalty — which does not exist in current Norwegian law — he said that made sense.

"I don't wish for it but I would have respected that decision," he said. "There are only two outcomes in this case that I had respected, that that is the death penalty or acquittal."

According to Amnesty International, the only country in Europe that still applies the death penalty is Belarus; two young men were executed there last month. Norway abolished the death penalty in peacetime in 1905 and for war crimes in 1979.

Breivik claims to have carried out the attacks on behalf of the "Knights Templar," which he described in the 1,500-page compendium he posted online before the attacks as a militant nationalist group fighting a Muslim colonization of Europe.

Breivik said it exists but police just hadn't done a good enough job in uncovering it. The group consists of "independent cells," he added, "and therefore in the long term will be a leaderless organization."

Prosecutor Inga Bejer Engh pressed him about details on the group, its members and its meetings. Breivik claimed to have met a Serb "war hero" living in exile during a trip to Liberia in 2002, but he refused to identify him.

"What is it you're getting at?" Breivik told the prosecutor, then answered the question himself, saying prosecutors want to "sow doubt over whether the KT network exists."

The main point of his defense is to avoid an insanity ruling, which would deflate his political arguments. One official psychiatric evaluation found him psychotic and "delusional," while another found him mentally competent to be sent to prison.

Breivik also refused to give details on what he claims was the founding session of the "Knights Templar" in London in 2002. He conceded, however, that he embellished somewhat in the manifesto when he described members at the founding session as "brilliant political and military tacticians of Europe."

Breivik testified that he had used "pompous" language and described them instead as "people with great integrity."

Bejer Engh challenged him on whether the meeting had taken place at all.

"Yes, there was a meeting in London," Breivik insisted.

"It's not something you have made up?" Engh countered.

"I haven't made up anything. What is in the compendium is correct," he said.

Later, he answered with more nuance.

"There is nothing that is made up, but you have to see what is written in a context. It is a glorification of certain ideals," Breivik said.

When asked about his faith, Breivik described himself as "a militant Christian" but added he was "not particularly religious." He said he was a member of Norway's Lutheran Church, but dismissed its leadership as "pacifist."

Breivik's defensive answers contrasted with the assertive posture he took Tuesday when he read a prepared statement to the court, boasting that he had carried out the most "spectacular" attack by a nationalist militant since World War II.

"I think what we are watching is the revelation of a sort of fantasy or a dream," said Christin Bjelland, deputy head of a support group for survivors of the July 22 massacre.

Breivik said his victims — mostly teenagers at a ruling Labor Party youth camp — were not innocent but legitimate targets because they were representatives of a "multiculturalist" regime he claims is deconstructing Norway's national identity by allowing immigration.