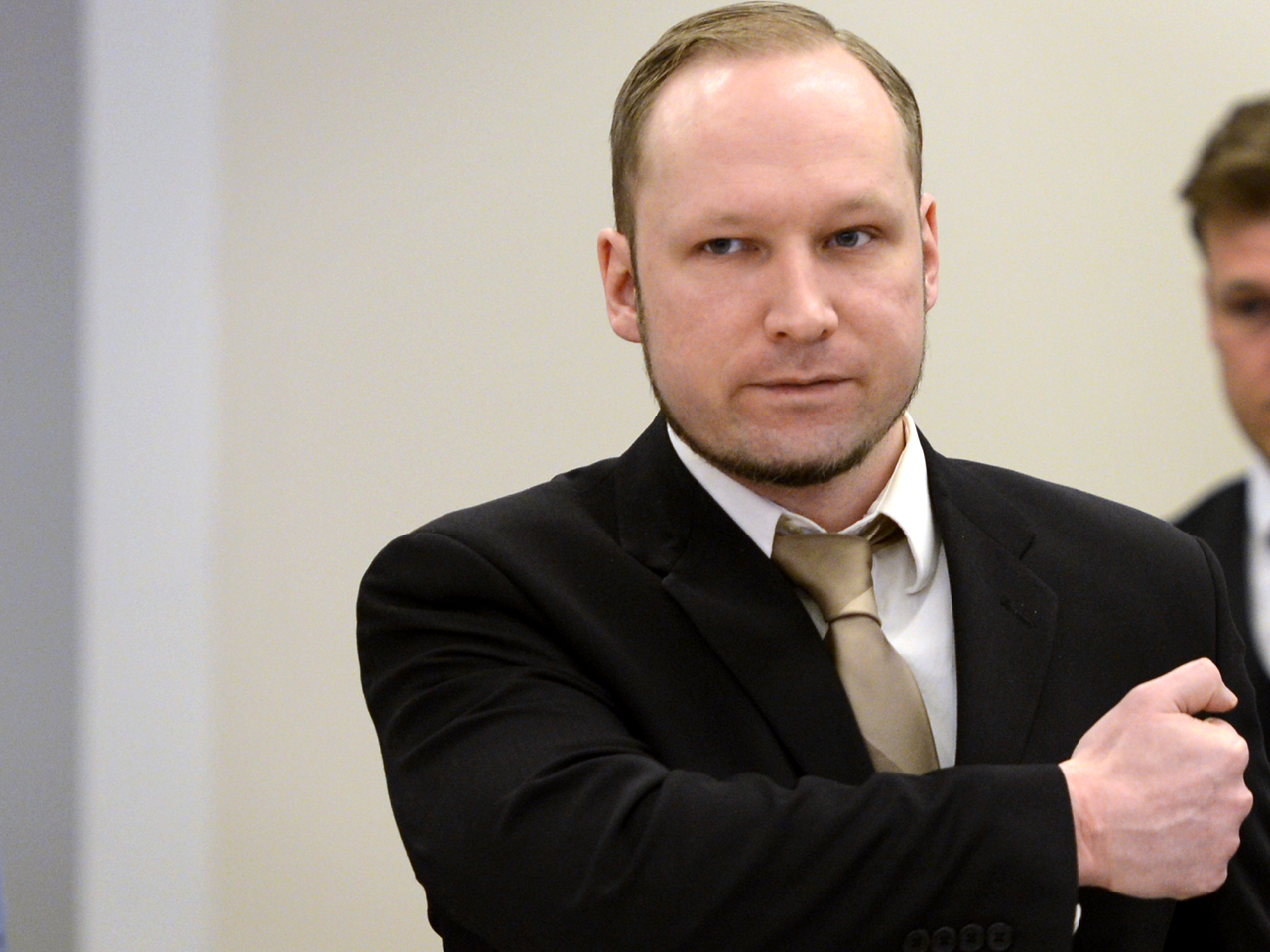 (AP) OSLO, Norway - Norwegian gunman Anders Behring Breivik insisted Tuesday he would massacre 77 people all over again, calling his July rampage the most "spectacular" attack by a nationalist militant since World War II.

Reading a prepared statement in court, the anti-Muslim extremist lashed out at Norwegian and European governments for embracing immigration and multiculturalism. He claimed to be speaking as a commander of an anti-Islam militant group he called the Knights Templar — a group that prosecutors say does not exist.

Maintaining he acted out of "goodness, not evil" to prevent a wider civil war, Breivik vowed, "I would have done it again."

Pressed by prosecutors to explain what he meant, he compared his attacks to the U.S. dropping atomic bombs on Japan during World War II.

"They did it for something good, to prevent further war," Breivik said.

Breivik has five days to explain why he set off a bomb in Oslo's government district on July 22, killing eight people, and then gunned down 69 others, mostly teenagers, at a Labor Party youth camp outside the Norwegian capital. He denies criminal guilt, saying he was acting in self-defense, and claims the targets were part of a conspiracy to "deconstruct" Norway's cultural identity.

"The attacks on July 22 were a preventive strike. I acted in self-defense on behalf of my people, my city, my country," he said as he finished his statement, in essence a summary of the 1,500-page manifesto he posted online before the attacks. "I therefore demand to be found innocent of the present charges."

He compared Norway's Labor Party youth wing to the Hitler Youth and called their annual summer gathering an "indoctrination" camp. But he later told prosecutors he would have preferred attacking a conference of Norwegian journalists instead, but wasn't able to carry out that "operation."

Breivik's testimony was delayed after one of the five judges hearing the case was dismissed for his comments online the day after the attack — comments that said Breivik deserves the death penalty. Lawyers on all sides had requested that lay judge Thomas Indreboe be taken off the trial, saying the comments violated his impartiality. He was replaced by backup lay judge Elisabeth Wisloeff.

Norway doesn't have the death penalty. If found mentally sane — the key issue to be decided in the trial — Breivik could face a maximum 21-year prison sentence or an alternate custody arrangement that would keep him locked up as long as he is considered a menace to society.

Breivik is being tried by a panel of two professional judges and three lay judges — citizens appointed for four-year terms who participate on an equal basis in deciding guilt and sentencing. The system is designed to let ordinary people have a role in the Norwegian justice system, though the lead judge still runs the trial.

On Monday, Breivik rejected the authority of the court, calling it a vehicle of the "multiculturalist" political parties in power in Norway. He confessed to the "acts" that caused the 77 deaths but pleaded not guilty.

Again on Tuesday — just like the start of his trial on Monday — Breivik entered the court smirking before flashing a clenched-fist salute.

According to Breivik, Western Europe was gradually taken over by "Marxists and multiculturalists" after World War II because it didn't have "anti-communist" leaders like U.S. Sen. Joseph McCarthy. The senator dominated the early 1950s with his sensational but unproven charges of Communist subversion in high government circles in the U.S. His probes gave rise to the term McCarthyism, which describes the persecution of innocent people on the charge of being Communists.

"But even McCarthy was too moderate," Breivik said.

"It is critically important that I can explain the reason and the motive" for the massacre, Breivik replied.

Mette Yvonne Larsen, a lawyer representing victim's families, also interrupted Breivik, saying she was getting complaints from victims who were concerned that the defendant was turning the trial into a platform to profess his extremist views.

Her remarks prompted the judge to again urge Breivik to wrap it up. But Breivik replied if he wasn't allowed to continue he might not speak at all.

He warned that Europe was heading toward a civil war between "nationalists and internationalists" and praised others suspected of right-wing extremist attacks in Europe. They included Peter Mangs, a Swede suspected of shootings against immigrants in 2010 and three Germans — Uwe Boehnhardt, Uwe Mundlos and Beate Zschaepe — suspected in the killings of eight people of Turkish origin, a Greek man, and a policewoman between 2000 and 2007.

Asked why he started crying in court on Monday, when prosecutors showed an anti-Muslim film that Breivik posted on YouTube before the attacks, he said: "I was thinking about Norway and Europe, which are ruled by politicians and journalists killing our country. I was thinking that my country is dying."

Breivik insisted that the Knights Templar network exists, with two other cells in Norway, though he said his description of it in the manifesto was too "pompous." The initiation rites and medals of honor he described were ideas, rather than existing traditions, he said.

After proceedings ended Tuesday, prosecutors reiterated they don't believe the group is real, and said they would question Breivik more about it Wednesday.

Families of the victims were upset at his testimony.

"I think it's important to underline that we don't view Breivik as a politician in this matter. He is a mass murderer," Trond Henry Blattmann, whose 17-year-old son was killed on Utoya, told The Associated Press outside the court.

Even his lawyers concede Breivik's self-defense defense is unlikely to succeed and said the main thing for them was to convince the court that Breivik is not insane.

One official psychiatric examination found him legally insane while another reached the opposite conclusion. The judges panel to decide whether to send him to prison or compulsory psychiatric care.

In his testimony Tuesday, Breivik rejected suggestions that he has a narcissistic personality disorder.

"July 22, wasn't about me. July 22 was a suicide attack. I wasn't expecting to survive that day," he said. "A narcissist would never have given his life for anyone or anything."