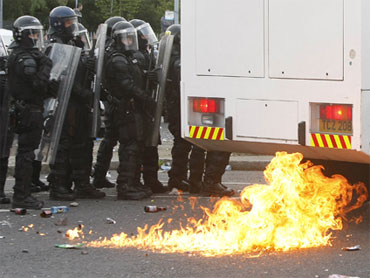 The violence began in Ardoyne, a traditional IRA power base in north Belfast, where about 100 demonstrators tried to block one parade route while masked men and youths on side streets bombarded police with bricks, bottles, stones and Molotov cocktails.

Riot police in helmets and shields dragged each protester off the street by their arms and legs, then officers used a massive mobile water cannon to douse the rioters.

An Associated Press reporter saw one teenage rioter preparing to throw a brick get knocked off his feet by a blast from the police water cannon. Blood streamed from his face as he scrambled from the pavement. Other rioters stood further back and threw empty beer bottles blindly over rooftops into police lines.

The violence spread to several other working-class Catholic districts in Belfast and other towns. Sporadic rioting continued into early Tuesday - laying bare the communal hostilities that remain despite Northern Ireland's nearly two decades of peacemaking.

Police said they had no doubt that officers and protesters had suffered multiple injuries in the Ardoyne confrontations, but did not expect to have accurate casualty numbers until Tuesday morning.

They said one policewoman suffered a suspected fractured skull after being struck in the head in Ardoyne, and paramedics' efforts to evacuate her were delayed by the rioters' unrelenting barrage.

Police reported suffering salvoes of stones, bottles and Molotov cocktails near the Ormeau Bridge in south Belfast, which also was barricaded with burning trash cans.

The latest trouble comes on top of rioting in two other Catholic parts of Belfast early Monday. Police said 27 officers were hurt during those street battles, including three who suffered pellet wounds from a shotgun blast.

"Society wants to move forward, and the organized actions of the past 36 hours are doing nothing to reinforce the peace that the people of Ireland voted for," said Belfast Mayor Pat Convery, a moderate Irish nationalist.

Police said their officers were ambushed early Tuesday in the Bogside district of Londonderry, Northern Ireland's second-largest city, after rioters set a police vehicle on fire. Police reinforcements tried to put out the blaze but came under fire from a masked gunman using a nearby pub for cover. The gunman fired five rounds before fleeing but hit nobody, police said.

Earlier, masked men in Catholic west Belfast hijacked a bus, ordered it to be abandoned outside a police station, and claimed a bomb had been hidden on the top deck of the bus. British Army explosives experts declared the threat a hoax.

In the town of Lurgan, southwest of Belfast, masked youths in a Catholic district called Kilwilkie threw Molotov cocktails both at police and at a passenger train stopped in the town. The engineer drove the train away after Molotov cocktails hit the side of one cabin, but it didn't catch fire and none of the 55 passengers on board was reported hurt.

In the nearby town of Armagh, several hundred Irish nationalists in another Catholic district gathered around the burning hulk of a hijacked vehicle. Police monitored that scene but didn't intervene.

Since 1998 a British-appointed Parades Commission has imposed restrictions on Orange marching routes to prevent the Protestants - accompanied by "kick the pope" bands of tattooed men playing fife and drum - from passing most Catholic districts.

Still, authorities have failed to negotiate alternative routes for some parades, including the one past Ardoyne's row of shops on Crumlin Road. The thoroughfare connects one Orange lodge to central Belfast.

The disputed Ardoyne parade involves a single Orange lodge of about 30 men and an accompanying band of about 50 men and boys. But it attracts several hundred Protestant supporters to match the Catholic crowds opposed to it, with police caught in the middle each summer.

Monday's parade passed the conflict zone after a two-hour delay. Some marchers in suits and ties shielded themselves with umbrellas as they walked quickly on a roadway littered with stones and broken glass. No marchers appeared to be hit.

The Orange Order commemorates July 12 - also known as the Glorious Twelfth, an official holiday in Northern Ireland - as the date when their community, descended largely from 17th-century Scottish settlers, secured their place in northeast Ireland versus Catholic natives.

On July 12, 1690, the forces of Protestant King William of Orange defeated the army of his dethroned Catholic rival, James II, at the Battle of the Boyne south of Belfast.

At 18 Orange rallying points across Northern Ireland, tens of thousands of Protestants enjoyed impromptu picnics in farm fields as their leaders read religious and political proclamations over loudspeakers. They asserted that William's 1690 victory "established civil and religious liberty," while Northern Ireland's political union with Britain remains "a heritage worthy of being passed down untarnished to future generations."

The Orange Order provides a grass-roots umbrella for Protestants from more than 50 denominations and sects. The order forbids its members to marry Catholics or attend Catholic services. It was a driving force behind the establishment of Northern Ireland as a new part of the United Kingdom in 1921, when the predominantly Catholic rest of Ireland won independence from Britain.