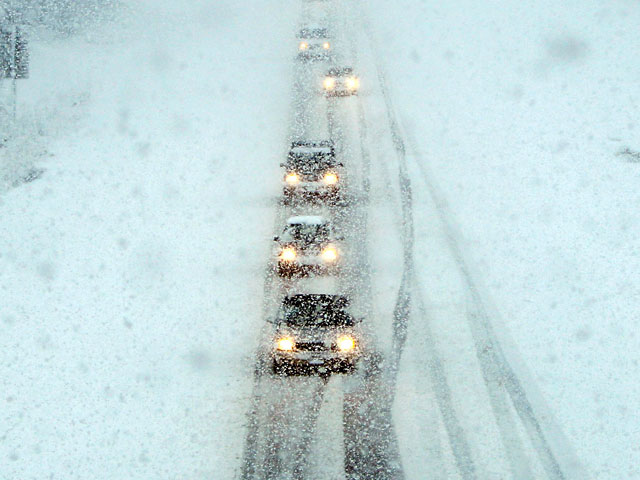 PORTLAND, Maine - An April Fools' storm brought heavy snowfall to parts of New England on Friday, creating a late-season winter wonderland that sent scores of cars sliding off roads, knocked out power for thousands and gave kids a surprise reprieve from school.

The spring Nor'easter packed a wallop as people awoke Friday — April Fools' Day — with wet, heavy snow quickly covering the pavement and clinging to trees, which drooped under the weight.

Falling tree limbs knocked out electricity for nearly 60,000 homes and businesses in Maine, New Hampshire, Massachusetts and Rhode Island at the storm's peak, officials said. Scores of cars and trucks slid off roads, but there were no reports of serious injuries.

"It was pretty dicey, to say the least," said Ripley, of Portland, who saw four vehicles off the highway and watched another fishtail before turning back.

Parts of Maine and New Hampshire were expected to see upward of a foot of snow, but the storm failed to live up to its billing elsewhere.

In Massachusetts, Fitchburg got 8.1 inches and Boylston saw 7.7 inches, and the numbers tapered to the south. Eastern New York and western Massachusetts were expected to get about 2 to 3 inches of snowfall, far less than originally forecast.

Power outages were the biggest problem. About 23,000 homes and businesses in southern Maine and another 20,000 in southern New Hampshire were in the dark at the storm's peak, officials said, and utility crews were working to restore electricity

In Portland, Maine, Pete Johnson was caught by surprise by the intensity of the storm Friday morning. He didn't believe the weather forecasters, especially after a relatively snow-free March. So, he took off his snow tires.

He said he should've known better.

"If you've done this long enough, you know it's going to snow again," he said, grabbing a cup of coffee before making a slippery drive to Boston for a business meeting.

In Concord, N.H., the parks and recreation department was boasting a week ago about getting its tennis courts ready for spring. On Friday, it switched gears, challenging followers of its Facebook page to submit pictures of snowmen in the parks.

"Old man winter is not giving up without a fight this year," department director David Gill said Friday.

"Last year at this time, everything was melting. But it's mid-February out here pretty much. It's definitely a treat," he said. "It's 100 percent open and it's April 1. It's a powder day on April Fools', not a joke or anything."