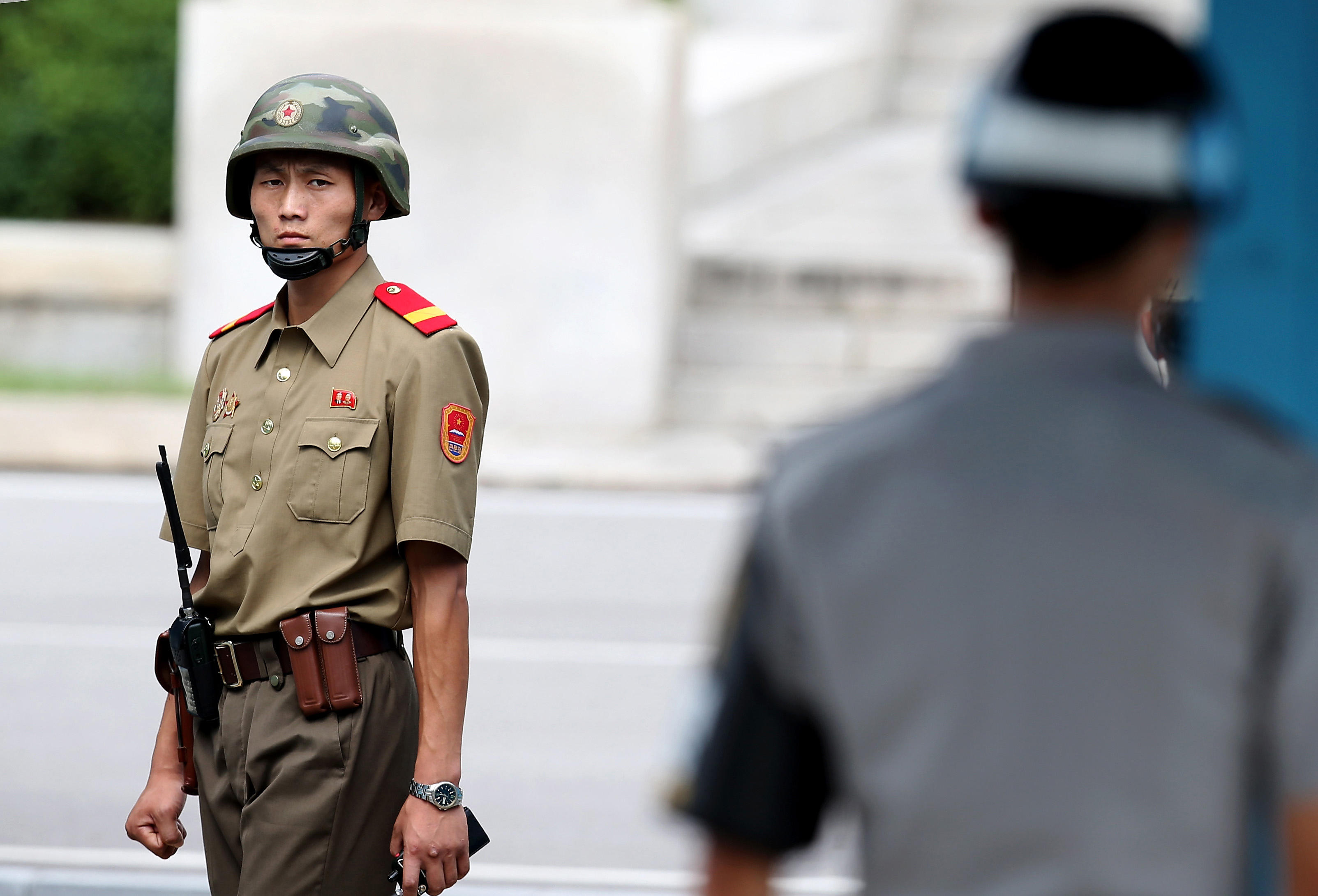 SEOUL, South Korea -- Four North Korean soldiers fired about 40 rounds at a comrade fleeing into South Korea and hit him five times in the first shooting at the jointly controlled area of the heavily fortified border in more than 30 years, the South's military said Tuesday.

South Korean soldiers did not fire their weapons, but Monday's incident occurred at a time of high animosity over North Korea's nuclear program. The North has expressed intense anger over past high-profile defections.

The soldier is being treated at a South Korean hospital after a five-hour operation for the gunshot wounds he suffered during his escape across the Joint Security Area. His personal details and motive for defection are unknown and his exact medical condition is unclear.

South Korea's military said he suffered injuries in his internal organs but wasn't in a life-threatening condition. But the Ajou University Medical Center near Seoul said the soldier was relying on a breathing machine after the surgery removed the bullets. Lee Guk-jong, a doctor who leads Ajou's medical team for the soldier, described his patient's condition as "very dangerous" and said the next 10 days might determine whether he recovers.

On Monday, he first drove a military jeep but left the vehicle when one of its wheels fell into a ditch. He then fled across the JSA, with fellow soldiers chasing and firing at him, South Korea's military said, citing unspecified surveillance systems installed in the area.

Suh Wook, chief director of operations for the South's Joint Chiefs of Staff, told lawmakers that North Korea fired a total of about 40 rounds in a shooting that his office suggested started while the soldier was in the jeep.

The solider was found beneath a pile of leaves on the southern side of the JSA and South Korean troops crawled there to recover him. A U.N. Command helicopter later transported him to the Ajou medical center, according to South Korean officials.

The North's official media haven't reported the case as of Tuesday afternoon. They have previously accused South Korea of kidnapping or enticing North Koreans to defect. About 30,000 North Koreans have fled to South Korea, mostly via China, since the end of the 1950-53 Korean War.

The JSA is jointly overseen by the American-led U.N. Command and by North Korea, with South Korean and North Korean border guards facing each other only meters (feet) apart. It is located inside the 4-kilometer-wide (2 1/2-mile-wide) Demilitarized Zone, which forms the de facto border between the Koreas since the Korean War. While both sides of the DMZ are guarded by barbed wire fences, mines and tank traps, the JSA includes the truce village of Panmunjom which provides the site for rare talks and draws curious tourists.

Monday's incident was the first shooting at the Joint Security Area since North Korean and U.N. Command soldiers traded gunfire when a Soviet citizen defected by sprinting to the South Korean sector of the JSA in 1984. A North Korean soldier defected there in 1998 and another in 2007 but neither of those events involved gunfire between the rivals, according to South Korea's military.

The 1984 exchange of gunfire happened after North Korean soldiers crossed the border and fired, according to the U.N. Command. In Monday's incident, it wasn't known if the North continued firing after the defector was officially in the southern part of the Joint Security Area. The U.N. Command said Tuesday that an investigation into the incident was underway.

The Joint Security Area was the site of some bloodshed during the Cold War but there hasn't been major violence there in recent years. In 1976, North Korean soldiers axed two American army officers to death and the United States responded by flying nuclear-capable B-52 bombers toward the DMZ in an attempt to intimidate the North.