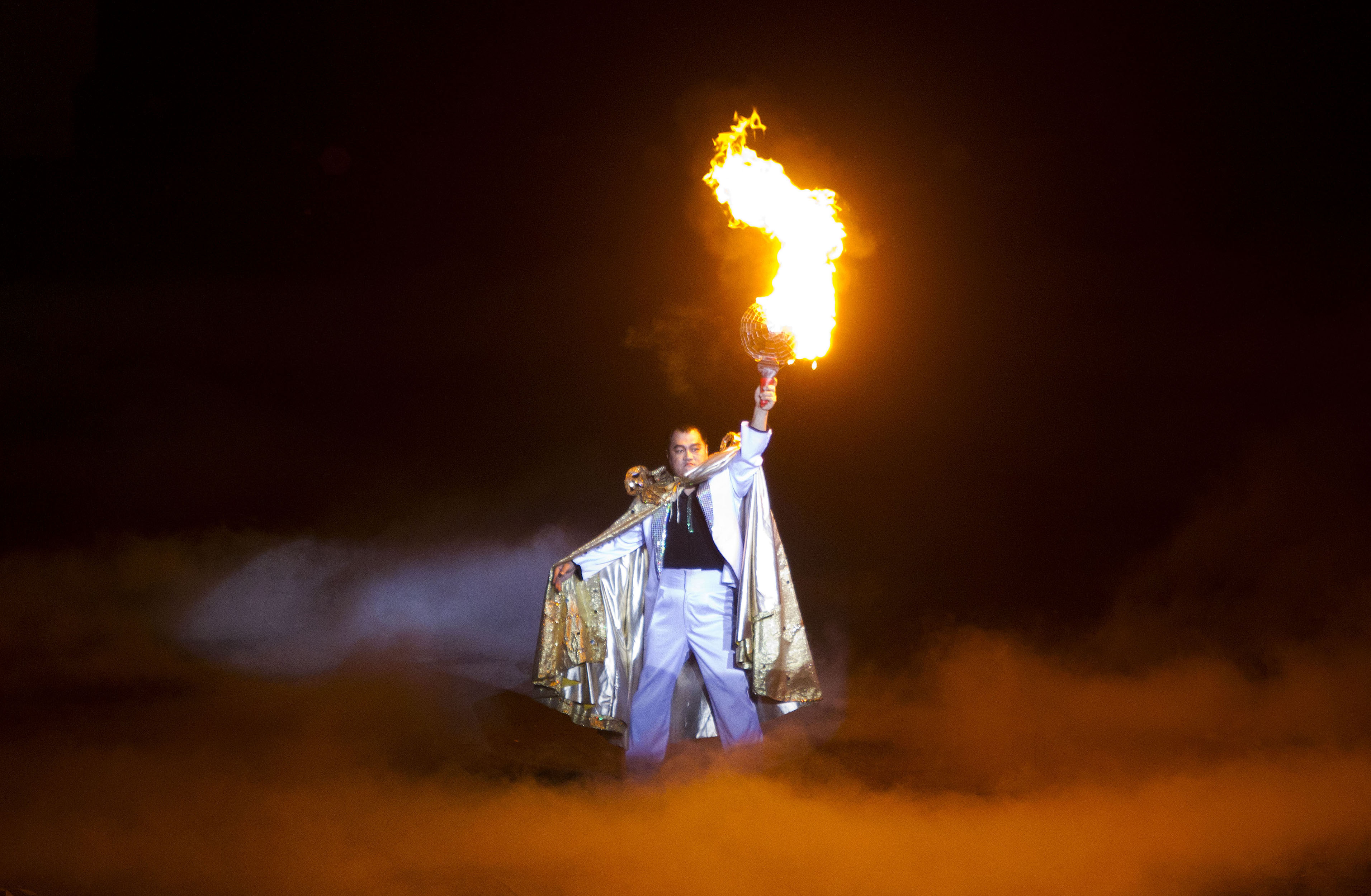 PYONGYANG, North Korea - Amid a burst of fireworks and a haze of smoke, a burly showman in a white sequined suit and gold lame cape appears with a flourish. Over the next 45 minutes, he makes a Pyongyang bus levitate and wriggles free from a box sent crashing to the stage through a ring of fire.

This is magic North Korean-style performed in a show touted as the country's biggest ever and mounted in a city where good, old-fashioned illusion, a dancing bear and a dose of slapstick comedy can still command the biggest crowds of the year.

The country's love for magic is a legacy of the circus traditions they inherited decades ago, during an era of Soviet influence.

North Korean founder Kim Il Sung ordered the creation of the Pyongyang Circus in 1952 in the middle of the Korean War. The tradition of highly technical stagecraft — including the Arirang mass games, where 100,000 performers move in sync in a feat that has come to embody North Korean discipline and regimentation — still dazzles in a country where high-tech entertainment is scarce.

"They love magic shows, together with the circus," said Tony Namkung, a scholar who often serves as a liaison between North Korea and the U.S. and other governments. "Like so many other things, it harkens back to a pre-electronic past when things were much simpler."

In fact, North Koreans so love magic that two diplomats dispatched to the United Nations had a special request in 1995 of their American hosts: They wanted to go to Las Vegas to see David Copperfield.

Wowed by the world-famous illusionist, the diplomats were determined to bring Copperfield to Pyongyang. But politics and finances trumped entertainment, and plans to bring the American magician to a nation still technically at war with the United States vanished in the haze of diplomatic tensions.

Undeterred, North Korea has kept putting on shows of its own, and it unveiled a massive one Monday at the capital's May Day Stadium. It was designed by Kim Chol, dubbed the "David Copperfield of North Korea," and will include seven performances in all.

The show stars Ri Thai Gum, a beefy showman with the extravagant flair — and physique — of a pro wrestler and the skills of Houdini. He whips off his white suit with silver-sequinned lapels to reveal a tank top and then straps on a gold-appliqued cummerbund onto his hefty waist.

The event was a highlight in a week of festivities surrounding Kim Il Sung's April 15 birthday. Many of the women turned out in festive traditional Korean dresses reserved for special occasions, sparkles sprinkled into their hair and wearing fur-lined vests to keep warm in the spring chill. Outside, pink and yellow lights illuminated a fountain as music played to crowds enjoying an evening out.

An advertisement boasts that the show features "aircraft and a large bus appearing and then suddenly disappearing, elephants and other heavy animals appearing mysteriously, a motorcyclist performing fantastic skills, magicians floating in the air as if in a gravity-free space."

And it does, adding in a healthy dose of slapstick comedy.

The tricks are simple crowd pleasers: A Pyongyang city bus filled with waving passengers levitates and then disappears; an acrobat appears to float through a magical skyscape of clouds.

There's the classic magician's assistant dressed in traditional Korean dress who gets into a box and reappears halfway across the stadium.

In another trick, a man goes into a box but after a wave of the Korean Houdini's hand, out comes a girl in a short, spangly miniskirt with a prancing baby bear on a leash bowing hello to the audience

The highlight involves a helicopter and a ring of fire that aim to have the clapping audience, mostly Koreans and a smattering of tourists and foreign dancers and musicians visiting the city for an arts festival, on edge.

"I thought it was great. The quality of the tricks that they pulled off was really high," said Chris Andrews, a tourist from Sydney, Australia. "That bear trick I thought was one of the coolest things I've ever seen."

Current leader Kim Jong Il is said to have inherited his father's love of the circus and is thought to be the one to push to bring Copperfield to North Korea.

Copperfield's stage manager once called North Korea's staging technology "among the most sophisticated in the world," according to Namkung.

Namkung, who took the North Korean diplomats to Vegas and later brought a Copperfield delegation to Pyongyang to discuss a visit, recalled that the time was ripe to bring a big American star to the North Korean capital.

The U.S. and North Korea had just signed an agreement for Pyongyang to freeze its nuclear power plants and to replace them with light water reactors less prone to weapons proliferation as part of a plan to normalize relations between the longtime enemies.

There were high hopes that Copperfield's show — to be broadcast live on state TV in North Korea — could pave the way for a new era in relations between the bitter wartime foes. And in a symbolic show of support for reunification, Copperfield agreed to travel through the Demilitarized Zone dividing the two Koreas and perform for the South Koreans as well.

"This was right after the 'agreed framework' signing at a time when it looked as if the two nations would go down an entirely new path, and the atmosphere in Pyongyang was giddy," said Namkung, who also serves as a consultant to The Associated Press.

Copperfield himself was game, promising to make the city's iconic Juche Tower disappear, just as he did the Great Wall of China and the Statue of Liberty.

So seriously did the North Koreans take Copperfield's visit that they staged a private viewing of the circus for his production team's visit to Pyongyang and promised to give the illusionist a vast suite once used by former President Jimmy Carter on his visit in 1994, Namkung recalled.

But the State Department thought it was too early to back the venture, and the plan eventually foundered over how to finance the trip.