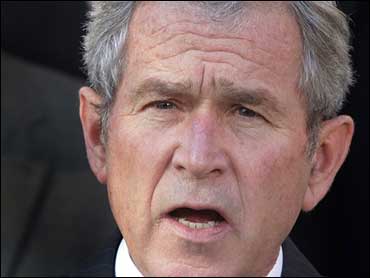 President Bush said Friday that he got North Korea's attention by writing Pyongyang a letter and that Kim Jong Il can get his attention by fully disclosing his nuclear programs and proliferation activities.

North Korea verbally responded through a diplomatic channel on Thursday to a letter Mr. Bush sent to Kim earlier this month. The letter, the president's first to the leader of the communist regime, was viewed as a personal gesture from the president, who once branded North Korea as part of an "axis of evil."

"An important step is a full declaration of programs, materials that may have been developed to create weapons, as well as the proliferation activities of the regime."

Officials indicate it was a positive reaction to the president's call for cooperation on North Korea's nuclear program, reports CBS News White House Correspondent Peter Maer. The administration is eager to find a path to a de-nuclearized Korean Peninsula.

His colleague, Mark Knoller, reports White House spokesman Scott Stanzel later said the U.S. will not disclose what the message was, but that the verbal reply came on Wednesday through North Korea's UN mission.

A senior U.S. official with knowledge of the contents of North Korea's message said it contained what appeared to be a pledge from Pyongyang to follow through on its denuclearization deal as long as the United States held to its end of the bargain.

North Korea began disabling its plutonium-producing reactor last month under watch of U.S. experts. In exchange, the U.S. agreed to seek normalizing ties with North Korea and remove the country from terrorism and trade sanctions blacklists.

"We'll live up to our side, we hope you'll live up to yours," the official paraphrased Kim's message as saying. The official spoke on condition of anonymity to describe the private diplomatic exchange.

The message was the country's first official response to the letter from Mr. Bush, but it was unclear if the message was directly from Kim.